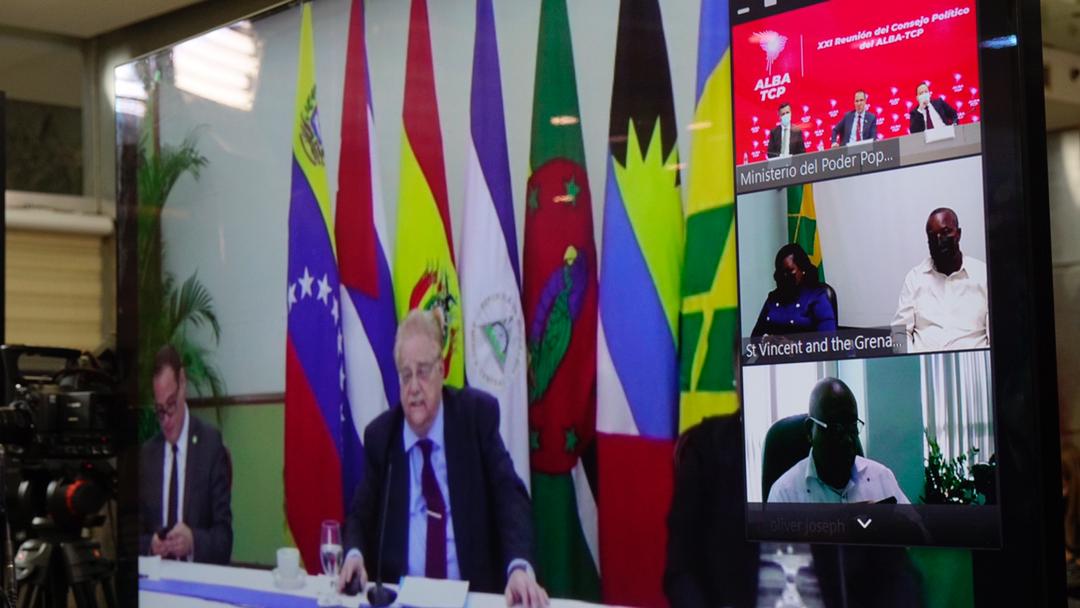 The Foreign Ministers of the ALBA-TCP member countries demanded the immediate lifting of the unilateral coercive measures imposed by the U.S. Government on some countries of the region, particularly Venezuelan and Nicaragua, as they have a negative impact on their societies and represent further obstacles in those nations’ fight against COVID-19.

In his statement, Bolivia’s Foreign Minister Reogelio Mayta and his Cuban counterpart Bruno Rodríguez pointed out the imposition of “sanctions” to break the will of peoples is unacceptable as they do not enable cooperation among nations and cause humanitarian harm.

Antigua and Barbuda’s Foreign Minister Chet Greene condemned the imposition of illegal unilateral coercive measures and the biased designation of Cuba as a “State Sponsor of Terrorism.”

Kenneth Darroux, Dominica’s Minister of Foreign Affairs, International Business and Diaspora Relations, thanked for the support provided by the regional bloc to overcome the COVID-19 pandemic challenges, and recognized the humanitarian work carried out by the Henry Reeve Medical Brigade and its contribution to fighting coronavirus in ALBA-TCP member countries and other regions.

“We have a clear objective to achieve; therefore, we need to demand the lifting of unilateral coercive measures preventing countries from giving an immediate response to the pandemic,” said Joseph.

In this regard, Joseph condemned the unilateral coercive measures as they also prevent the procurement of loans to fight natural disasters in the region.

St. Vincent and the Grenadines’ Minister for Foreign Affairs Keisal Melissa Peters urged to strengthen a real commitment to the economic development of the ALBA-TCP member countries. Also, she reaffirmed her country’s commitment to democracy and dialogue in the Bolivarian Republic of Venezuela and rejected the blockade imposed by the United States “to destroy the noble ideals of this new form of integration.”

Nicaragua also rejected the application of unilateral coercive measures amid the pandemic as they represent crimes against humanity.

“If the international community is committed to the defense of human rights, multilateralism and the State of Law, it should immediately condemn their application as a crime against humanity,” said Paul Oquist, Minister –Secretary for National Policies in the Presidency of the Republic of Nicaragua.