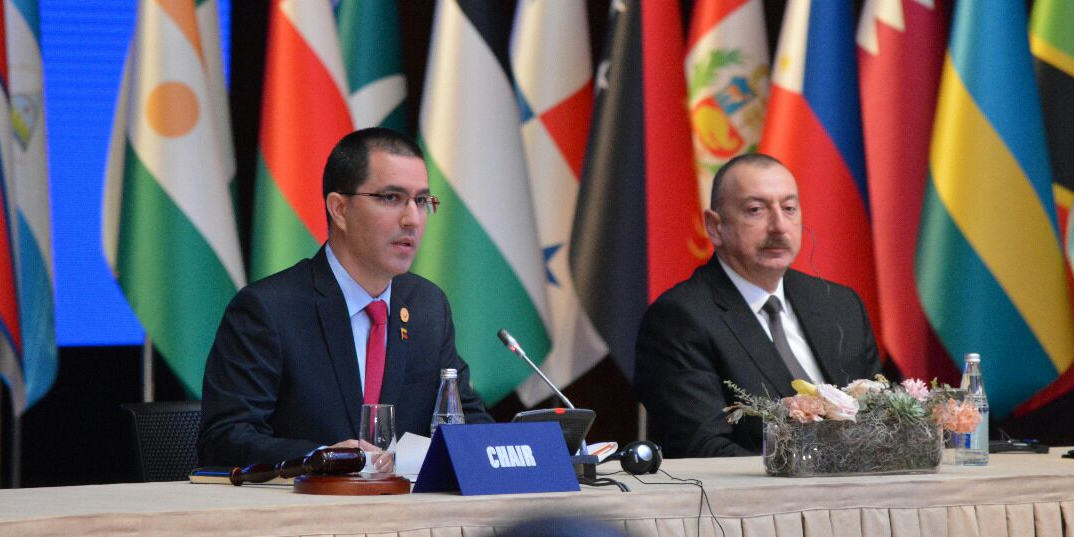 1. It is an honor for the Bolivarian Republic of Venezuela to take the floor on behalf of the 120 Member States of the Non-Aligned Movement (NAM).

2. First of all, we would like to express our gratitude, Mr. President, for calling this High-level Meeting on a topic of great importance for our Movement which is tireless working to reinforce its role as an antiwar force and a peace lover. Likewise, we want to thank those who precede us in taking the floor for their valuable interventions.

3. Furthermore, the Member States of the Movement take advantage of this opportunity to commend on the transparency and inclusion by the Permanent Representatives of Bangladesh and Lithuania, in their capacity as co-facilitators of the intergovernmental negotiations of the A/72/L.49 resolution project, in leading the negotiation process of such text, which included the active participation and constructive spirit of the Non-Aligned Movement (NAM), under the full leadership of the Kenya delegation.

4. Currently, we live in a world that faces new emerging, multiple and complex threats, as well as challenges that attempt against international peace and security, which shall be addressed through multilateralism, in the framework of the international law.

5. One of the main objectives of the Non-Aligned Movement (NAM) is the adoption of effective actions to end with aggressions and other violations to peace, with the purpose of defending, promoting and encouraging the resolution of international controversies through pacific means, so as to avoid any risks to international peace and security or justice. Therefore, we consider that preserving, promoting, reaching and keeping international peace and security shall continue to be the main priority of the United Nations agenda. This is why the international community shall not spare their efforts in the field of conflict prevention and peacekeeping.

6. Preventing the outbreak, continuation and recurrence of conflicts is therefore a collective responsibility, and even more important, it is a national responsibility that could benefit from the objective and impartial assistance and from the support that the United Nations may provide, with prior request, and in collaboration with the regional and sub-regional organizations and with other pertinent actors, accordingly.

7. Furthermore, the Non-Aligned Movement, even though it recognizes the different tools in the hands of the international community and the United Nations to guarantee peacekeeping and international security, including preventive diplomacy, it also highlights the importance of using these tools in good faith and not as an instrument to interfere in the domestic affairs of the Member States, strictly respecting the principles of international law regarding the relations of friendship and cooperation among States, in conformity with the UN Charter.

8. Likewise, we highlight the need of the participation and inclusion of all the society sectors in the processes of peace, including women and young people, who play an important role in preventing and resolving conflicts, as well as in the efforts to keep and consolidate peace, and in the development of peaceful and resilient societies. Integration is key to progress in the processes and objective to consolidate national peace, with the purpose of guaranteeing that the needs of all the sectors of society are taken into account.

9. The Non-Aligned Movement reaffirms its commitment to the promotion of peaceful resolutions of disputes, in conformity with Article 2 and Chapter VI of United Nations Charter, as well as to all pertinent UN resolutions and international law as a whole, so as to contribute to the strengthening of international peace and security and to safeguard future generations from the scourge of war and armed conflicts, even through the strengthening of the United Nations’ role in the peaceful resolution of controversies, prevention and resolution of conflicts; confidence building, national reconciliation and peace building; rehabilitation, reconstruction and post – conflict development.

10. In this regard, allow us to underline that during the 18th Ministerial Conference of Non-Aligned Movement (NAM), held just a few weeks ago in Baku, Republic of Azerbaijan, the Ministers highlighted that the root causes of conflicts must be addressed in a coherent, well planned, coordinated and exhaustive way, together with the other political, social, economic and development instruments. Likewise, they emphasized that the United Nations should pay due attention to the manner in which these efforts can be carried out from the first stage of United Nations participation in post – conflicts situations, and should continue without interruption after the starting of the United Nations peacekeeping operation, so as to ensure a smooth transition towards peace and lasting security, as well as sustainable development. In this context, they underscored the need of synergies improving between peacekeeping and peace-building activities in order to achieve the ultimate goal of sustaining peace.

11. Our stance is of great relevance, taking into account that in most cases, the structural causes of conflicts such as inter alia poverty, hunger and inequalities – including those related to gender – human rights violations and fundamental freedoms, injustice, lack of employment and access to education, deficiencies in terms of accountability and mismanagement of natural resources, constitute basic elements of an integral objective and the process to peacekeeping.

12. The Non-Aligned Movement (NAM) has taken note of the Secretary General approach on the improvement of the interrelationship between United Nations political commitments and peace operations deployed on the ground. There is no need to exaggerate the need to break compartmentalized structures inside the Organization, even for the maintenance mandates and peace building and operations to be well calibrated in the framework of wide political and development objectives in peacekeeping.

13. On the other hand, the Member States of the Non-Aligned Movement have also taken note of the efforts of the Secretary General to integrate their proposals for the reform on peace and security, development and internal management into a coherent narrative. We have also taken note of your concrete proposal regarding the United Nations peace-building architecture, including the Peace-building Support Office, to serve as a starting point for the promotion of comprehensive coherence of the peace-building and peacekeeping system, as well as proposals for improved, predictable and sustainable resources that coincide with United Nations effective approach and its work in consolidating and keeping peace. We hope to maintain the momentum created on this occasion and engage in deep discussions in order to consider all these proposals and recommendations, including their follow-up and implementation, in preparation of the 2020 Peace-building Architecture Exam.

14. Finally, the Non-Aligned Movement (NAM) emphasizes that there can be no development without peace and that there is no peace without development; therefore, we must work together, redouble our efforts and improve synergies between peacekeeping and peace-building activities, as appropriate, to achieve the ultimate goal of keeping peace, which will be fundamental to fulfill the commitments agreed by our Heads of State and Government after adopting the 2030 Agenda for Sustaining Development, which seeks inter alia to strengthen universal peace.