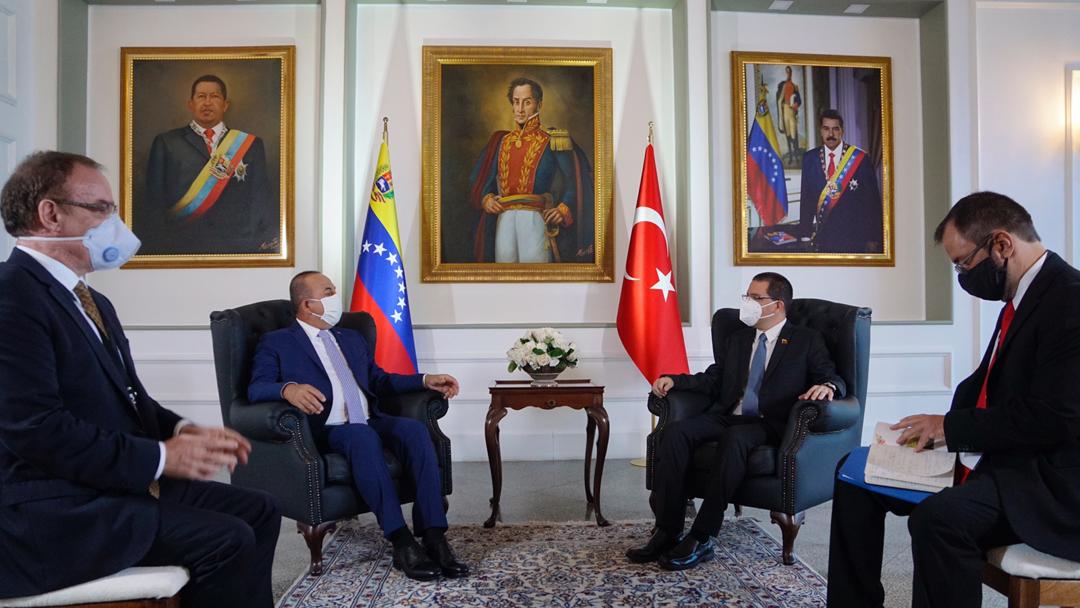 On the occasion of his official visit to the Bolivarian Republic of Venezuela, Minister of Foreign Affairs of the Republic of Turkey Mevlüt Çavuşoğlu held a meeting on Tuesday with his Venezuelan counterpart Jorge Arreaza to boost the friendly relation and bilateral cooperation between the two countries.

Foreign Minister Arreaza highlighted the importance of Turkey’s solidarity with Venezuela amid the COVID-19 pandemic and its rejection to the escalation of aggressions of the U.S. empire.

In this regard, Arreaza said that in the difficult times of the global sanitary emergency, when the Government of the United States and its ally countries have stepped up their unilateral coercive measures and aggressions against Venezuela, Turkey’s fraternal stance has been of great importance.

“Today, we will see concrete results in the health area thanks to the true, humanitarian, disinterested, sincere cooperation, without hidden agendas, that Turkey has shown us in recent years,” said Foreign Minister Arreaza, referring to agreements endorsed in the health area.

“A week ago, we received almost 20 tons of supplies and equipment to face COVID-19 in Venezuela,” said Arreaza.

On the other hand, Foreign Minister Çavuşoğlu explained that Turkey and Venezuela are friends “in good and bad times,” and foresaw a fruitful agenda in the South American nation, where important cooperation agreements will be endorsed in areas such as health, economy, and culture, among others.

After his arrival in Caracas, the Turkish diplomat will be received by Venezuela’s President Nicolás Maduro.

During the visit, the Venezuelan and Turkish foreign ministers signed different bilateral agreements to commemorate the 70th anniversary of diplomatic relations between Ankara and Caracas.

Venezuela’s and Turkey’s bilateral alliance is based on a policy to build a multicentric, multipolar world fostered by the Bolivarian Revolution under the principles of mutual respect for sovereignty and non-foreign intervention.