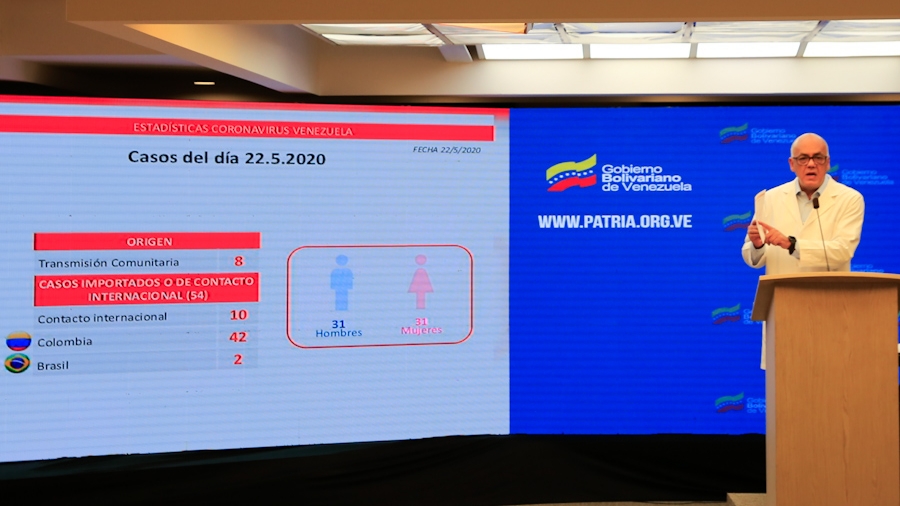 Number of infections by COVID-19 amounts to 944

After the detection of 62 positive cases by COVID-19, in the last 24 hours, the total number of infections rose to 944 in Venezuela, reported the Sector Vice-president of Communication, Culture and Tourism, Jorge Rodríguez.

Of the new cases registered, 54 are imported (42 from Colombia, 2 from Brazil and 10 as a result of contacts with international travelers), while 8 were detected by community transmission, Rodríguez explained, offering a balance of the strategies implemented by the National Executive. for the prevention and containment of the virus.

The recovery rate is 262, which represents 27.8% of the total number of infections. The 672 active cases are receiving medical care distributed as follows: 331 in sentinel hospitals, 325 in Comprehensive Diagnostic Centers and 16 in private clinics, while the death toll remains at 10.

He stated that 19 million 688 thousand 488 Venezuelans have answered the survey regarding COVID-19 in the Patria system.

Regarding the control of the entry of compatriots across borders, he explained that 47 thousand 123 have returned, of which 554 have tested positive for respiratory infection, which has represented 79% of the cases announced in recent days.

The United States, remains the epicenter of contagion with a record of 1 million 644 thousand 646 infected and the highest number of deaths with 97 thousand 635.

Meanwhile, Brazil is positioned as the center of proliferation of COVID-19 in South America with 330,890 cases and the sum of 21,848 deaths.

For its part, Peru reached 111 thousand 698 infections and 3 244 deaths, while Chile has 61 thousand 857 affected patients and a death rate of 630 people, Ecuador reports an underreporting of 35 thousand 828 cases and 3 thousand 56 deaths and Colombia 19 thousand 131 affected of which 682 have died.