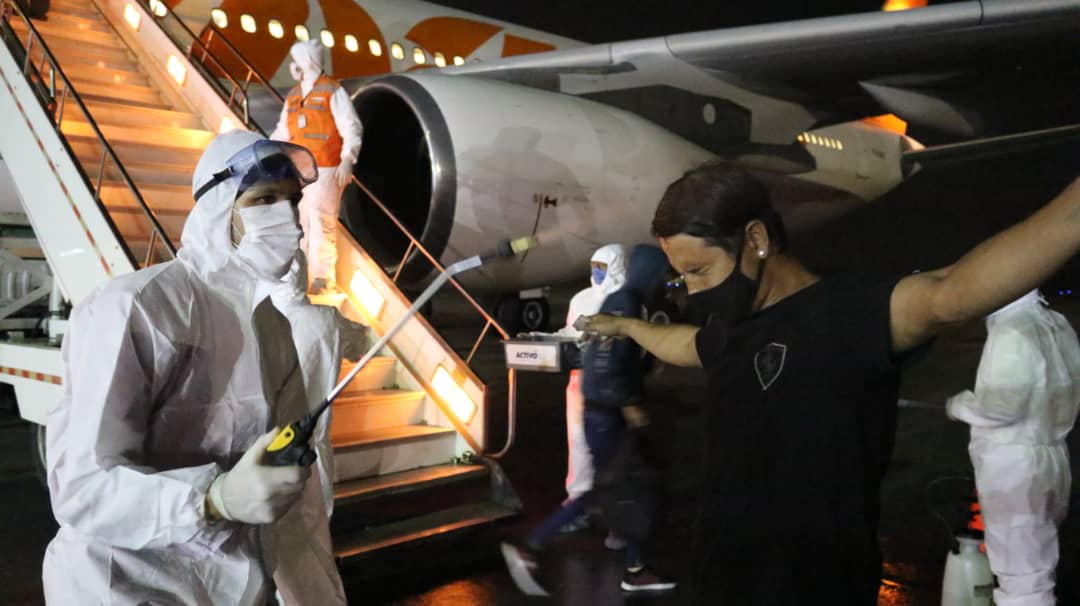 This Friday, a total of 210 compatriots arrived in Venezuela from Lima, Peru, on a special flight enabled by the state airline Conviasa, and channeled by the National Government.

The provision, framed in the special operations of the Plan Vuelta a la Patria announced by President Nicolás Maduro, responds to the demand of a significant number of compatriots who requested to return to their country of origin, amid the contingency measures decreed to combat the spread of Covid-19.

They were received with the pertinent medical-sanitary attention to diagnose possible cases -before boarding the plane-, and all the prevention protocols were followed to avoid the spread of the virus in the Bolivarian Republic of Venezuela.

Upon arrival at Maiquetía International Airport, the director of Consular Relations of the People’s Power Ministry for Foreign Relations, Eulalia Tabares and the Vice-minister for Latin America, Rander Peña, were in charge of receiving them and giving the welcoming words to Venezuelans.

“We have received 210 Venezuelans from Peru, 2 of them Hiam and Naim, 3 and 5 years old, who after months without their mother Rosangel who was illegally deported from that country separating her from their children, today they are reunited thanks to President Nicolás Maduro”, Vice-minister Peña wrote through his Twitter account @RanderPena.

In a statement last Thursday, the Executive Vice-president of the Republic, Delcy Rodríguez, reported that 29,193 Venezuelans have returned to the country across the borders, to whom the protection of their health have been guaranteed through protocols for sanitary and epidemiological control. implemented by the Head of State, Nicolás Maduro.

It should be noted that Conviasa and the Plan Vuelta a la Patria have been put at the service of the contingency in the countries where Venezuelans are waiting to return, and after President Nicolás Maduro reported the activation of measures to support the nationals who are under pressure outside the national territory due to the health emergency caused by Covid-19.

Just as it is expected to be done with Venezuelans in the United States, for which the Head of State has instructed to deploy a search device for people who could not return due to the suspension of flights that would bring them back, however, In this case, the pertinent permits by the US authorities are awaited.