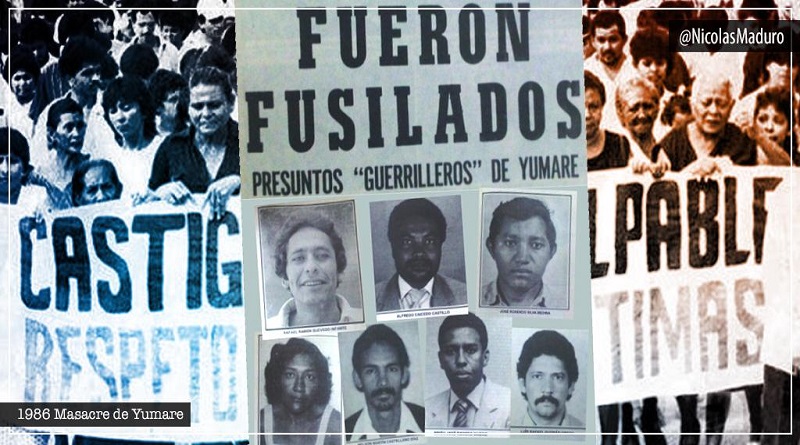 Friday, May 8, 2020 marks the 34th anniversary of the Yumare Massacre, and the instruction handed down by Commander Hugo Chávez to “never forget” is  today more relevant than ever as it can be related to the recent attempted armed incursion against Venezuela led by opposition sectors that inherited the repressive, mercenary violence of the Fourth Republic.

On May 8, 1986, nine left-wing social leaders were captured and killed by agents of former state security agency, DISIP, headed by Henry López Sisco during the government of Democratic Action’s (AD) Jaime Lusinchi.

The incident took place in the Barlovento sector, La Vaca village, in the current Manuel Monge municipality, in Yaracuy State.

President Nicolás Maduro paid tribute to the memory of these nine revolutionaries who were killed. On his Twitter account, he described the Yumare Massacre as a fascist, terrorist policy.

“It is the true face of the domestic oligarchy, one that tortures, does away with and kills those who think differently. This will never happen again in our homeland,” he wrote.