The President of the Bolivarian Republic of Venezuela, Nicolás Maduro, sent this Monday a communication to more than 100 leaders and social movements in the world, through which he denounces the serious events that are taking place against peace and stability of the Latin American country from the United States. “As is of public knowledge, on March 26 the Government of the United States announced a very serious action against a group of senior officials of the Venezuelan State, including myself, as Constitutional President of the Bolivarian Republic of Venezuela”, specifies the letter that was read in a statement to the press by the People’s Power Minister for Foreign Relations, Jorge Arreaza. This action, explains the Venezuelan Executive in the letter, consisted in the presentation of a formal accusation before the US judicial system, which is not only illegal in itself, but also aims to support a false accusation of drug trafficking and terrorism, with the sole objective of simulating the alleged judicialization of the Venezuelan authorities. In this regard, he recalled that the Venezuelan government denounced on March 25 the development in Colombian territory of an operation aimed to assassinate the President of the Republic, his family members and high-ranking officials of the State; This operation also considered attacking Venezuelan civil and military targets. President Nicolás Maduro alerted world leaders to “the reckless and criminal steps that the Donald Trump administration is taking” that, despite the fearful acceleration of the growth of the Covid-19 that affects the American people, “seems determined to go deeper its policy of aggression against sovereign states in the region, and especially against the Venezuelan people”.

After reading the communication, Foreign Minister Jorge Arreaza denounced the infamous persecution by the United States government against President Nicolás Maduro and other high-ranking officials of the Venezuelan state, on the basis of unfounded accusations. The diplomat demonstrated that the American harassment lacks evidence and foundation. On the contrary, he suggested, it resembles McCarthyism implemented after World War II as a method of persecution for political intolerance and diverse thinking.

“Today it is simply a whim, without any evidence whatsoever, he describes anyone as a drug trafficker or a terrorist. Much more shamefull are the data that the United States government handles, its institutions that are experts in traffic control and supervision of drugs, which demonstrate that 90% of the drug that enters the United States is produced in Colombian territory”, he stressed.

The former United Nations undersecretary, Pino Arlacchi, completely discredited these indications when affirming that “there is no illegal drug trade between Venezuela and the United States, except in the twisted fantasy of Trump and his associates”. The diplomat, who between 1997-2002 headed the United Nations Office on Drugs and Crime (Unodc), based his assertion on the latest report of this office and the latest document from the Drug Enforcement Administration of the United States (DEA). According to the latter, 90% of the cocaine introduced into the United States comes from Colombia, 6% from Peru and the rest from unknown origins. “There is no trace of Venezuela on any page of the two documents”, said the former UN secretary. Foreign Minister Jorge Arreaza warned that these events threaten the peace of Venezuela, but stated that “no one will deviate our determined will to protect the Venezuelan people”, especially at this stage of the fight against Covid-19, in which context the unjustified accusations were made. 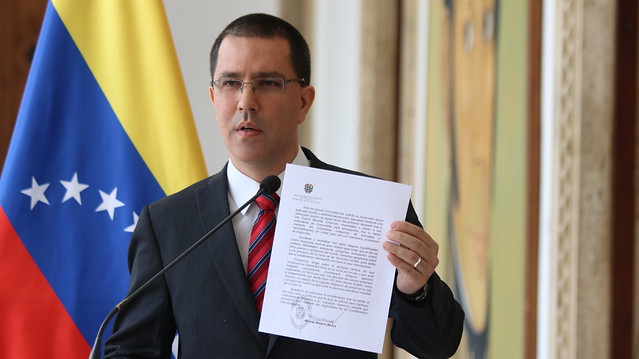