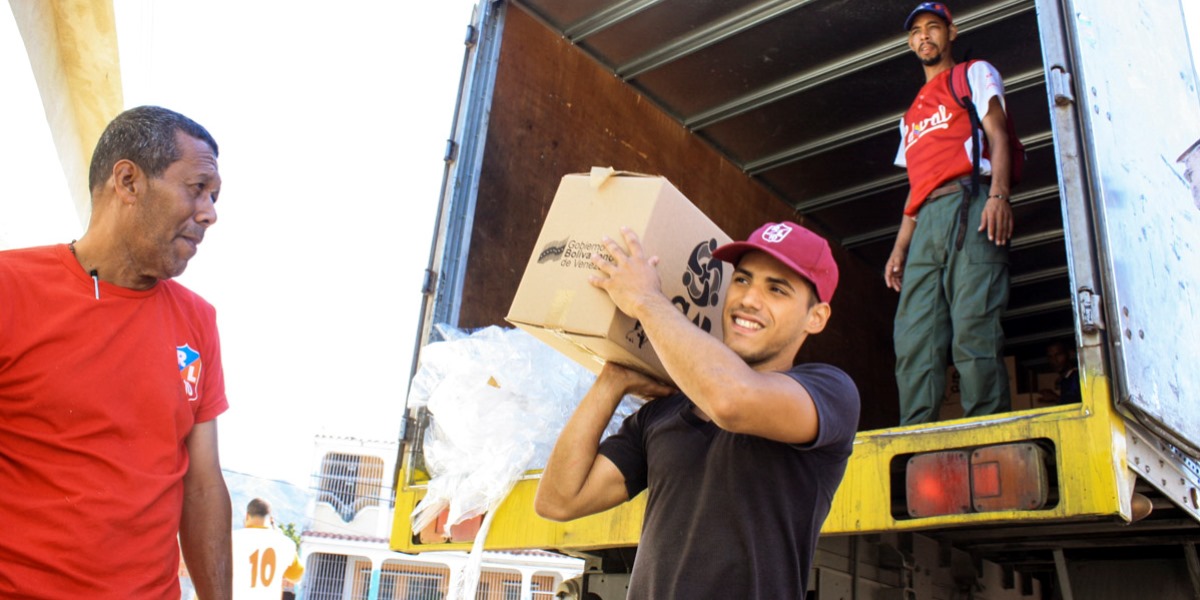 CLAP, an instrument of food sovereignty in the face of the imperial onslaught

Since 2014, Venezuela faces the incessant and illegal attacks of the United States (US) government day by day, with the sole objective of defeating the Venezuelan people.

In this siege, the North American hegemon has targeted the sovereign peoples’ food, so, in counteroffensive, the President of the Republic, Nicolás Maduro Moros, on March 12, 2016, created the Local Supply and Production Committees (CLAP), which has resulted to be a miracle for more than 6 million vulnerable families throughout the country, benefiting 24 million people with food at subsidized prices.

Obsessed about Venezuela, they attack this social protection policy from the White House with blocks to prevent its effective development.

Given this, the Bolivarian Government has created mechanisms to combat and resist the attacks of the criminal blockade, as well as the impact of unilateral coercive measures on the right to food and the effects on the food production system.

It has been 4 years in which the protagonist has been the Popular Power, leading the economic revolution in the system of food delivery to the Venezuelan people.

For this year, all the necessary mechanisms are applied to achieve the goal of 100% CLAP of national production, with the help of small and large producers, in order to achieve food security and sovereignty.

These figures reflect the efforts of the National Executive to overcome the economic difficulties to which countries in the region are joining, preventing exchange relations and affecting the lives of millions of Venezuelans.

With the CLAPs, the strategic vision of productive expansion is combined with the People’s Power, the public and private productive sectors, and a model for the manufacture and distribution of basic necessities is generated throughout the country.

Venezuela raises the flags of social inclusion and demonstrates to the world the respect for human rights with the creation of the CLAP, as a defense method against interference factors.

Bolívar’s Homeland has received important recognition from the Food and Agriculture Organization of the United Nations (FAO) for decades, for reducing hunger and extreme poverty by more than 50 percent throughout the country. Other multilateral organizations join, such as the Economic Commission for Latin America and the Caribbean (ECLAC), which recognized the effort to reduce levels of undernourishment.

This has allowed to demonstrate to the world the humanistic efforts to achieve the food supply that the Bolivarian Government executes and how it protects the people from the brutal economic blockade of the United States.

The greatest triumph of the Bolivarian Revolution has been to embrace the people in difficulties and fight to maintain food security.

In the context of unilateral coercive measures that the US government vilely applies to the Bolivarian people, these are considered crimes against humanity.

In the path of legitimate defense undertaken by the National Executive, sufficient arguments are presented before the International Criminal Court (ICC), located in The Hague, Netherlands, to file a complaint for crimes against humanity by the government of the United States against the Venezuelan people, product of the illegal unilateral coercive measures that it has implemented since 2014.

The people join from all areas to account to the world for these infamous aggressions that attack 30 million Venezuelans, to whom the Pentagon seeks to curtail the right to food, health, education and access to goods and services with criminals blockades.

Today, on a new anniversary of the creation of the CLAPs, the Bolivarian Government flies the flags of humanism and peace, and works to guarantee food for the most humble.