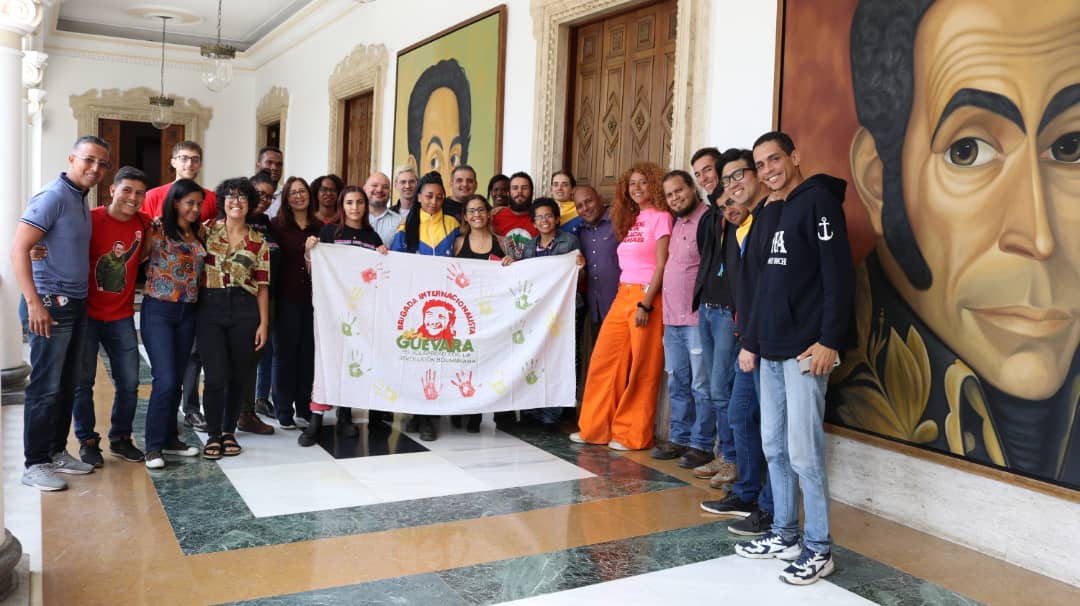 The Internationalist Brigade Che Guevara participated in “Our struggles” Forum, which was held this Friday at the Casa Amarilla Antonio José de Sucre, this forum exposed the challenges of the Bolivarian Revolution before the economic blockade and unilateral coercive measures imposed by The United States government. This forum was moderated by the Vice-minister for North America, Carlos Ron.

With the objective of advancing in the articulations that promote the diplomacy of the peoples, the different perspectives of strategic struggles undertaken by the Bolivarian people and Government were presented to the brigade members.

It should be noted that these battles are also fought at the communication level, in this sense, the planning director of the Telesur television station, Iría San Vicente, reported on the permanent siege against its informational signal (Telesur), as well as the challenges of the campaign in defense of a channel that has been avant-garde in the fight against hegemony.

For his part, the external director of Petróleos de Venezuela (PDVSA), Ricardo León, addressed the consequences generated by the embargo on Citgo, a subsidiary of PDVSA, in the United States.

Economists Hemmi Croes and Pablo Jiménez also participated in this forum, who gave a brief review of the harmful effects of coercive measures on the Venezuelan economy, which in turn have placed the country in financial difficulties by imposing a blockade on all transactions with Venezuela.

One of the sectors that has been most punished by unilateral coercive measures has been the LGBTI community in Venezuela, since they have been denied access to medicines and retrovirals that are of vital importance for the treatment of people with HIV positive. This problem was deepened by the feminist lawyer and political scientist, Maikely Ferrer, and the activist for human rights and sexual diversity, Alexis Bolívar.

At the end of the day, the members of the Internationalist Brigade “Che Guevara”, made an anti-imperialist tour and oath at the Cuartel de la Montaña, in Caracas, where the remains of Commander Hugo Chávez rest, also received a decoration in recognition of their struggles, by the mayor of the Bolivarian Libertador Municipality, Erika Farías.