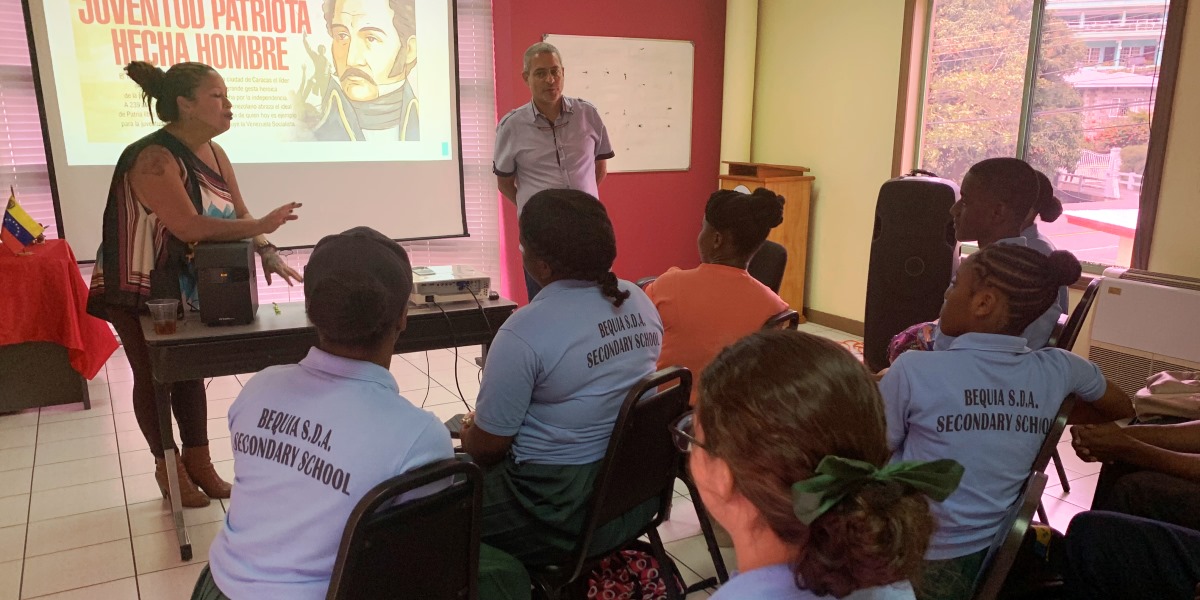 The Embassy of the Bolivarian Republic of Venezuela in Saint Vincent and the Grenadines, through the Venezuelan Institute for Culture and Cooperation ‘Hugo Chávez Frías’, gave the conference “Patriotic Youth made Man” to the students of the High School “Bequia”, In the framework of the commemoration of the Battle of La Victoria and Youth Day.

Andreína Bermúdez, academic coordinator of the Institute, welcomed the Spanish students from the “Bequia” island, located in the Grenadines, and showed them through videos, photographs and an exhibition of indigenous crafts and objects, part of the Venezuelan culture and the history; the independence struggles, and the heroes of the Homeland as the Liberator Simón Bolívar.

He explained to the group of students that Venezuela is celebrates every February 12 the Youth Day, in commemoration of that group of young people who accompanied José Félix Ribas during the Battle of La Victoria in 1814, where he managed to stop the royalists at command of José Tomás Boves, with “an army formed mainly by students, many of them from the University of Caracas. Most were very young, like you, they were not more than twenty years old. In Venezuela we have a long history of independence struggles and still, today, we continue to resist imperialist attacks”.

Francisco Pérez Santana, head of the Venezuelan Diplomatic Mission in the Caribbean country, talked with the students of “Bequia” High School about the Bolivarian Revolution and the great challenges facing youth today; He explained the multiple attacks of the US government against the Venezuelan people and how youth have faced and resisted these attacks.

The diplomat took the opportunity to encourage the group of young people to continue studying the Spanish language, reminding them that it is the second most spoken language worldwide. “I want to congratulate you for your interest in learning the Spanish language; learning a new language will serve you for your personal and professional growth and development; travel, study, meet people from other parts of the world; it is important that you continue practicing and introduce yourselves more in all forms of learning”.

These student visits to the Institute are part of the policy of the Diplomacy of Peace of the Bolivarian Government of Venezuela, which seeks to strengthen the knowledge of the culture and history of the Venezuelan homeland among the peoples of the Caribbean and the world.