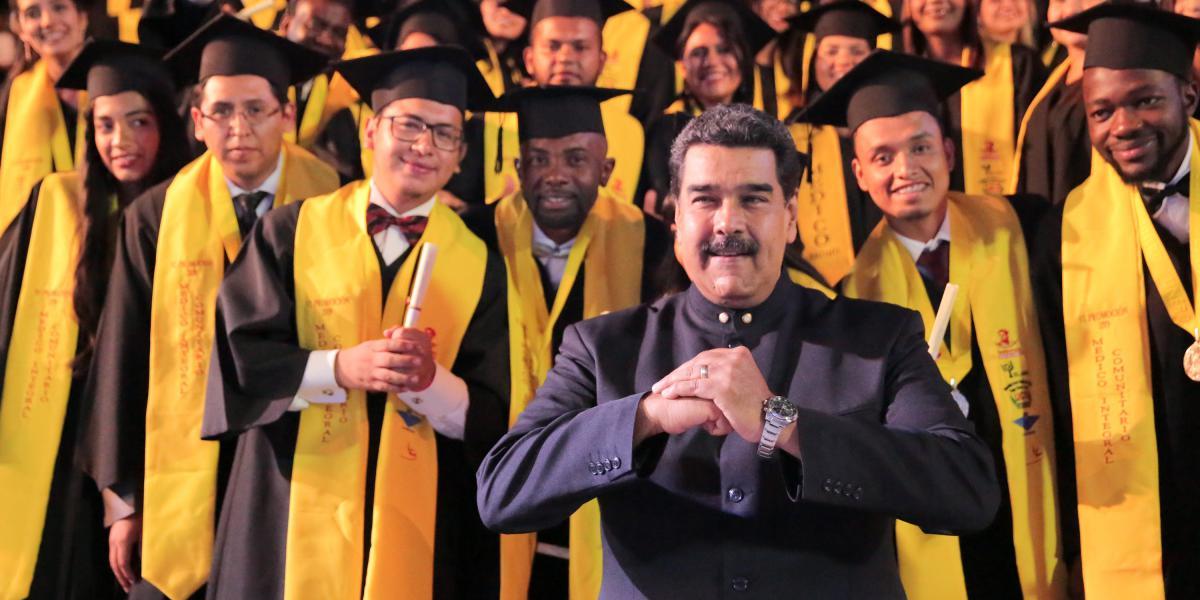 The first one began on January 23, 2019, with the right-wing leader Juan Guaidó, when he, being president of the National Assembly, declared himself the first national president during an open town hall held in eastern Caracas, without having any legal basis nor constitutional to do so.

It is noteworthy that Maduro never stopped working for the country, despite the direct threats of Donald Trump, president of the United States, and the other top leaders of the North American country.

The main weapon of the United States, in its eagerness to attack the Bolivarian Revolution to overthrow it, are unilateral coercive measures, one of them affecting Petróleos de Venezuela (PDVSA).

Another important action was against the Central Bank of Venezuela (BCV), which prohibits all financial institutions in the world from carrying out transactions with the national banking entity, since they are subject to freezing of accounts. Also it can be added all the direct threats of US imperialism to invade the country.

Another aspect of the external and internal attack was the electromagnetic and cyber sabotage against the National Electric System (SEN) that began on Thursday, March 7, 2019, causing the biggest electrical problem in the history of Venezuela, lasting in some states between five and seven continuous days.

The first year in his second term, the President continued to receive disproportionate attacks on the bolivar currency, through the parallel dollar, which is taken by merchants to speculate on the prices of essential commodities for the people.

But the important thing in this fact is that the Bolivarian Revolution, through its Economic Recovery, Growth and Prosperity Program, achieved that little by little the economy was self-regulating.

For many analysts, the fundamental policy that has served to strengthen the Bolivarian Revolution is the Bolivarian Diplomacy of Peace, to such an extent that important victories in the international arena were achieved.

One of the triumphs was reached on April 27 with the departure of Venezuela from the Organization of American States (OAS), in a dignified response to the constant aggressions of the agency through its Secretary General, Luis Almagro, and then an important step for the consolidation of national peace.

US imperialism always seeks to subjugate governments that are not docile to their opinions and that is why they also block the accounts of nations abroad, inhibiting them to make payments that serve to Buy medicines, food, mechanical spare parts, among others.

Below are the steps of the financial blockade against Venezuela:

2. All transactions related to the provision of financing and other transactions in any digital currency or token are prohibited.

6. The Central Bank of Venezuela is prohibited from conducting transactions in US dollars. It also limits and interrupts operations in international banks inside and outside the US. This has resulted in higher transaction costs and loss of value that must be assumed by Venezuela. In addition, the situation has forced the use of other emerging market currencies (Turkish Liras, Dírhams and Yuanes), which has generated millions of financial losses due to the exchange rate variations regarding to the US dollar.

7. Blocking of financial assets, capitals, subsidiaries and companies associated with Venezuelan state-owned companies, mainly the state-owned oil company PDVSA and its subsidiaries, such as Citgo, which has three refineries in the United States, a network of pipelines and more than 5,000 gas stations.

8. Appropriation of resources denominated in dollars and other currencies in international banks, which had the condition of being international reserves of the Central Bank of Venezuela.

9. There are also penalties for high-level officials of the Venezuelan Government, but these lack information. They do not detail in which bank the frozen accounts are or how much money they had. nor do they say which goods were confiscated and in what part of the US. (or the world) they are.

During 2019, there were many difficulties generated by the Public Health System (SPS) due to the economic, financial and political actions of the national and international right, but the Constitutional President of the Bolivarian Republic of Venezuela managed to defeat them and with programs such as the Great Mission Barrio Adentro I, II and III, Humanized Childbirth Plan, National Vaccination Plan, Cuba-Venezuela Agreement, among others, boosted and increased attention to national citizens.

Another important aspect was the constant policy of graduation of new doctors that increase the army of white coats that assists the most vulnerable in the different hospitals, Integral Diagnostic Centers (CDI) and other such facilities in the nation.

Petro is the first cryptocurrency in the world that is issued by a government, in this case the Venezuelan, and that was the original idea of ​​Commander Hugo Chávez and consolidated by his successor, Nicolás Maduro Moros, for this, the president executed a number of measures that have consolidated this cryptoactive during its first year in the second presidential administration. These are:

-With a receipt of 350 billion, the state-owned company Petroleos de Venezuela (PDVSA) will support Petro with the commercialization of 5 million barrels of oil per year by 2020.

-Also, the production of food items such as rice, grains and animal protein will be promoted, as well as the export and distribution of medicines demanded by the Venezuelan people.

-On the other hand, the Bolivarian Government authorized the delivery of a license in Petros to the Valeven Venezuela company to operate as an exchange house, thus reaching 11 such institutions operating in the country.

-Delivery of Petroaguinaldo and use of the BDV BioPago, as well as other transactions in the National Platform and PetroApp.

It is worth mentioning that these types of policies seek to generate in the country a real recovery of its economy with the union of private and public sectors in order to complete and continue with the Bolivarian Economic Agenda dictated by the Social Cabinet.

At present there are more than 18 million people who have registered in the Carnet de la Patria, an instrument that has been fundamental for the construction of the Economic Recovery, Growth and Prosperity Program to give the people maximum happiness possible.

The Carnet de la Patria allows to strengthen the socialist programs, born in the heat of the national government, especially the José Gregorio Hernández Mission, Humanized Childbirth, Chamba Juvenil, Homelands and Breastfeeding, among others.

Undoubtedly, the most successful social program of recent years in the Bolivarian Revolution has been the Great Mission Vivienda Venezuela (GMVV), which has allowed the 2 million housing solutions completed and delivered to Venezuelan families during 2019.

Finally, this 2020 is seen as a very good one in every way for the national president and the Bolivarian Revolution, so that he continues to consolidate the legacy of the Eternal Commander Hugo Chávez.