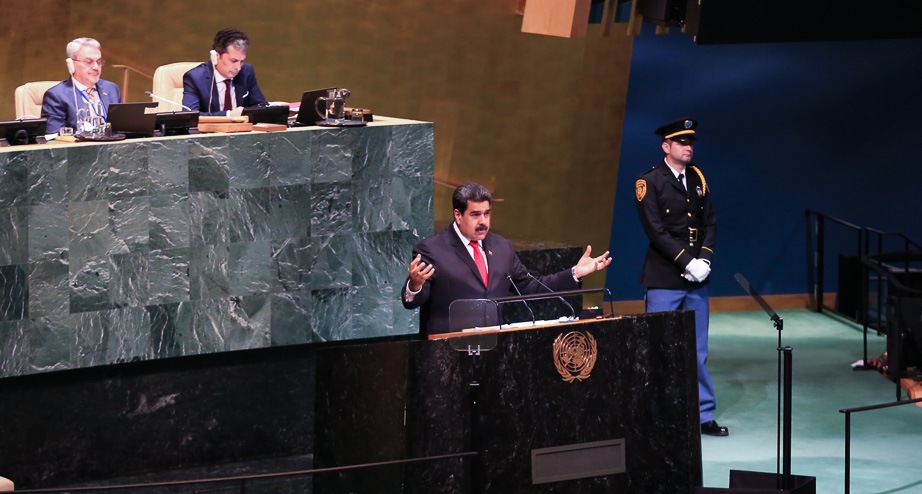 Venezuela victorious with the Bolivarian Diplomacy of Peace

Venezuela scores important victories in the Bolivarian Diplomacy of Peace, led by the constitutional president, Nicolás Maduro, and in the ongoing battle he raises as head of state and driver of foreign policy, against the aggressions of the administration of Donald Trump, in collusion with satellite governments in the region, to destabilize the country.

2019 closed with a diplomatic balance in favor, in the face of a terrible multiform war that surrounded all forms of attack on the Republic and the interference of power groups that have tried to apply interference measures.

One of these national triumphs, was reached on April 27 with the departure of Venezuela from the Organization of American States (OAS), in dignified response to the invariable attacks of the agency through its Secretary General, Luis Almagro, and then obtained an important step for the consolidation of the peace of the country.

Previously, on May thirty-first, 2016, Almagro makes true adventures, in tune with vassal governments, to activate the Democratic Charter against the nation but President Nicolás Maduro denounced this conspiracy and summoned the constitutional precepts to leave the multilateral organism and defend the homeland from a military intervention.

The management for the exit of Venezuela from the OAS was carried out by the then Foreign Minister of the Republic, Delcy Rodríguez. It was an epic battle of Venezuelan diplomacy that was fought to avoid the alteration of the democratic and constitutional order in Venezuela.

As a wing of the OAS, already defeated, the self-appointed Lima Group is born, composed of elite governments of the United States, promotes an unconstitutional exit of the Bolivarian Government, encouraging aggression policies, commercial and financial blockades, as well as supporting unconstitutional structures created by the Venezuelan ultra-right.

The Bolivarian Peace Diplomacy has repeatedly defended respect for the self-determination of the peoples and the free and sovereign decision of Venezuela to leave the OAS, obeyed the rejection of the coup and neo-colonial doctrines, and this is a triumph built with the ideological referent of the Eternal Commander Hugo Chávez.

Another memorable achievement of the Bolivarian Diplomacy of Peace, was to reach last October 17, a seat in the Human Rights Council of the United Nations Organization (UN), victory that was consolidated thanks to the confidence of most of the Member states. Venezuela won with 105 of the 193 votes.

Thus, Washington’s claims to immobilize Venezuela’s diplomatic relations with the UN member countries failed once again and although intimidation was the weapon to pursue, the representatives of the nations entrusted Venezuela with the defense of the Human Rights of the peoples of the world

In addition, Rodriguez denounced new forms of economic terrorism that plague the people and how Venezuela is the best example of this with the coercive and unilateral measures applied by the White House, which also uses the dollar as a mechanism of domination and terrorism to progressive economies.

“We have had a great victory at the UN, in New York. Venezuela has been elected by the world for a permanent position in the United Nations Human Rights Council. Victory for our Bolivarian Diplomacy of Peace”, Nicolás Maduro 10/17/2019.

The world said No More Trump

Another victory for peace was the collection of 13 million signatures for the national and international campaign, “No mas Trump, No more Trump”, which started in August as a protest against the interference policy and the vile blockade suffered by the nation.

The certification of the signatures was delivered on September 27, 2019, by the Vice-president of the Republic, Delcy Rodríguez, to the UN Secretary General, Antonio Guterres.

The people’s response was the repudiation of the genocidal, racist and xenophobic attack by Donald Trump on free and sovereign nations.

Relationship of respect and cooperation with the world

Venezuela’s relations with economic powers and peoples of Latin America and the Caribbean continue in consolidation.

In that order, for example the People’s Republic of China, the Asian giant, maintains relations of respect, cooperation and complementarity with the Bolivarian nation and with a vision of the new world geopolitics and the self-determination of the peoples.

There are 45 years of friendship between the two nations that ratify mutual trust and for this, presidents Nicolás Maduro and Xi Jinping, promote the common development and construction of the human development community to face the new historical challenges.

Since 1999, China and Venezuela reaffirmed their intention of cooperation with the signing of the memorandum of understanding for the creation of a joint energy committee, the signing of a treaty with investment protection, the transfer of export credit by the Bank China Development to the country, as well as an agreement for the development of a program for housing construction.

Venezuela transits sovereign free with world powers such as Russia and Turkey and maintains relations of mutual cooperation with Cuba, Nicaragua, the Caribbean islands and the countries of ALBA and Celac, to form a common front against imperial hegemony that attacks economies as a method of war to subdue the peoples. Thus, a multicenter and multipolar world is born with the ideological reference of the Eternal Commander Hugo Chavez and Venezuela raise the flags of victory through the Bolivarian Diplomacy of Peace present in the region and in the world.