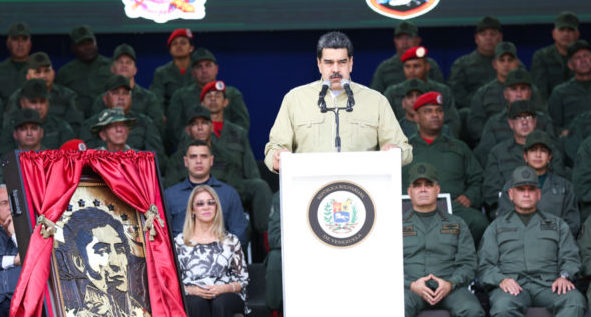 The aggressions suffered by the people of Venezuela with a multiform war are designed and ordered by the White House and the main enemy of the Nation has been established in the Colombian government of Iván Duque, denounced the President of the Republic, Nicolás Maduro, during the New Year’s Eve greetings to the Bolivarian National Armed Forces (FANB) and the people, held in the Courtyard of Honor of the People’s Power Ministry for Defense, in Fuerte Tiuna.

“All this perverse conspiracy, brings the curse of Santander, the betrayal of the Colombian oligarchy and it is from Colombia, where it has been prepared, financed and directed, from the Nariño Palace, that traitor called Iván Duque, to whom the people of Colombia claims to leave”, said the Head of State.

He argued that among the plans pursued by the neo-Grenadian government, encouraged by the factual powers of the region, there is an intention to provoke chaos and confrontations among the people and alerted the FANB about this regional enemy.

He recalled that the antipopular government of Colombia is involved in threats of military invasion of Venezuela, and that through the supposed humanitarian aid generated on February 23, 2019, as a policy of attack on our territory, it was the beginning of a trail of aggressions that persist today to destabilize the country, while congratulating the loyalty of the military body that did not bow to this historical circumstance.

Likewise, he mentioned how by then the opposition managed the resources delivered by the oligarchies to attack Venezuela, as well as the fate of the military who succumbed to the purchase of conscience.

“Then it was shown that the money collected in the cheap show that they set up on February 22, was stolen from each other, the money was spent on brothels, on drugs and it was demonstrated how they abandoned the military deserters and traitors who managed to compare their luck and today some of them are imprisoned by the United States police, on the United States – Mexico border, they have already been detained there for months, lying in oblivion and contempt”, President Maduro said.

An invasion attempt was defeated on April 30

Referring to the events of April 30, 2019, when the opposition sought a coup d’etat, he described it as “a disastrous day where it was intended to fill with death, blood and violence and before the betrayal of a handful of soldiers who joined the Venezuelan extreme right, thte conscience arose again and it was shown what the vast majority of Venezuela, accompanied by the Bolivarian National Armed Forces, want is peace, so we emerged with a great civic – military victory before those who wanted violence”.

He indicated that on April 30, from the White House, a destabilizing plan was expected, which failed thanks to the awareness of the defense of the Homeland of the great majorities.

President Nicolás Maduro said that on April 30, Venezuela gave a moral, spiritual and revolutionary counterattack to the factual powers “Donald Trump was left on the floor, he fell in the corridors of the White House, Bolivarian Knockout”.