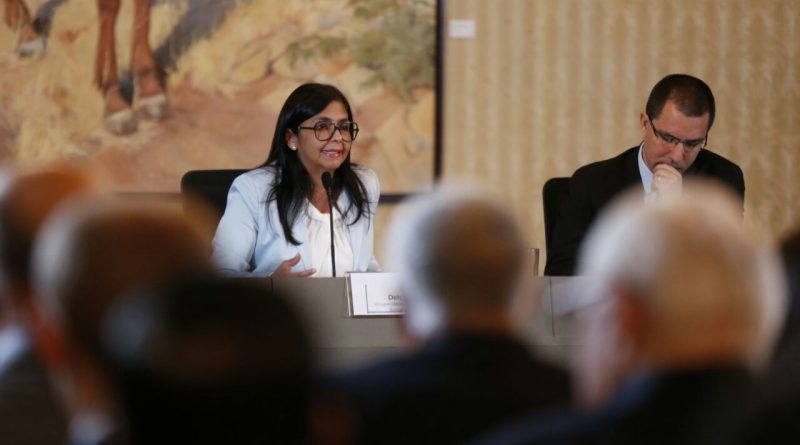 National Government is determined to defend sovereignty and territorial integrity

The Executive Vice-president of the Bolivarian Republic of Venezuela, Delcy Rodríguez, said that the National Government is determined to defend territorial sovereignty and integrity to guarantee the people their right to peace, future and progress.

“Venezuela is currently debating the historic struggle between the capitalist model and the Bolivarian Socialism model, Monrroe against Bolívar again”, Rodriguez compared.

Stressing that no one is going to take sovereignty away from Venezuela, the Vice-president warned that “if they do, we want them to know that here is the Venezuelan people willing to claim and avenge the fascist coup against Bolivia (…) we will avenge the sacred people of Bolivar”.

Rodriguez said that President Nicolás Maduro has ratified and is leading the dialogue.

“The National Dialogue table advances with sectors of the opposition and the Venezuelan right in the search for an agreement for respectful understanding among Venezuelans”, she said, highlighting that several former presidential candidates are currently participating in this peace management.

She also said that Maduro ratifies his willingness to continue on the road to Oslo, and took the opportunity to greet the Motevideo mechanism, where Uruguay, Mexico, the Caricom secretariat, Trinidad and Tobago and recently the invitation to  Argentina to participate.

“They are initiatives for democracy and understanding against war, intervention and there they will always see President Nicolás Maduro as the first dialogueist in the country”. she reiterated.

She recalled that during the meetings of the dialogue in the Dominican Republic, the opposition leader Julio Borges received a call five minutes before signing the agreement between both parties, where he was given the order from Bogotá (Colombia), so he would not sign the document.

She also said that many sectors of the international community, including the government of the United States (USA), have realized the compulsion to the lie that the Venezuelan opposition sector has.

“We know the great inconvenience existing in the high government of that country (USA), due the lies that these gentlemen tell them to be able to keep accessing the resources they steal from the country”, she said during the meeting, held at the Casa Amarilla.