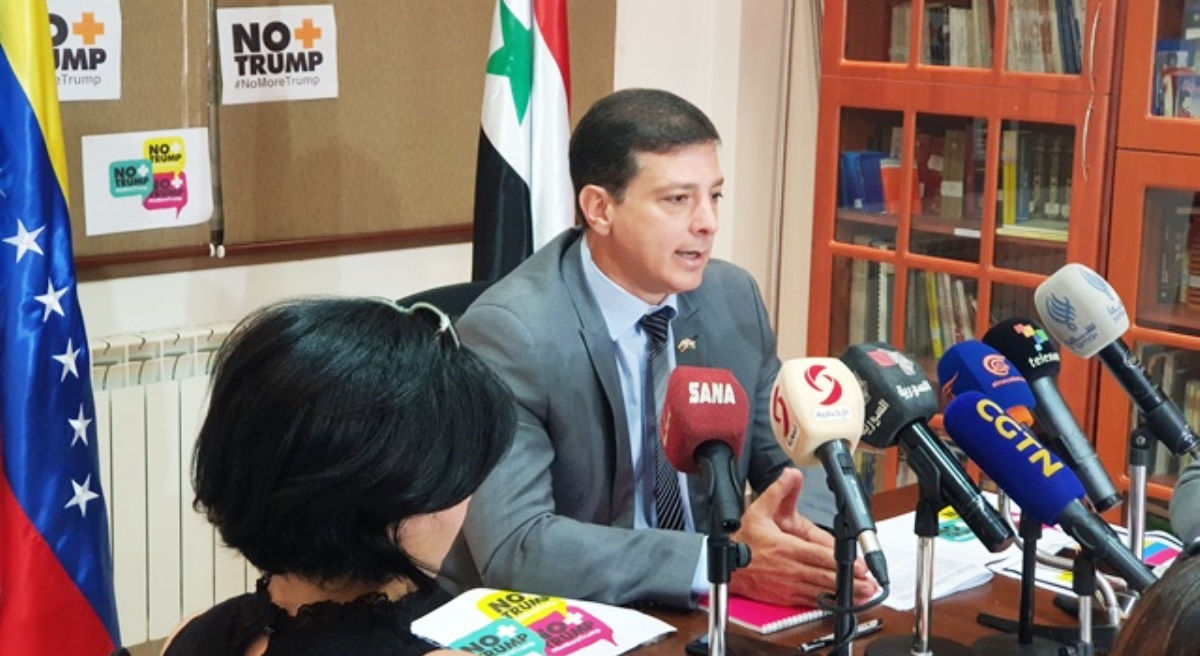 At a press conference from the Embassy in Damascus, the head of the diplomatic mission of the Bolivarian Republic of Venezuela in the Syrian Arab Republic, José Gregorio Biomorgi Muzattiz, reported on Wednesday the difficult situation that the Venezuelan people are going through because of the illegal coercive measures imposed by the government of the president of the United States, Donald Trump, through executive orders that seek to block, freeze, steal the assets and economic resources of Venezuela in that North American country.

The Ambassador said that this series of measures imposed by the US administration does not point to the Bolivarian Government, but to the sovereign people of Venezuela, who stood up and stands firm against the repeated attacks and interference of the government of that country in its internal affairs. The Venezuelan people defend their right to self-determination.

During the meeting with the media, the head of the diplomatic mission referred to the efforts of the Government of President Nicolás Maduro to promote a peaceful and political solution to the situation between Venezuela and the US. He asserted that a sector of the Venezuelan opposition does not have independent decisions, but obeys the instructions issued by the US empire.

Ambassador Biomorgi stressed that, given the failure of President Trump to overthrow the Bolivarian Government and kneeling the Venezuelan people, his government understood that communication channels with Caracas must be opened and the Trump administration has recently made this known.

He also asked the media for its support in spreading among the Syrian citizens the global campaign “NoMoreTrump” “NoMasTrump” to collect signatures, specifying that these rubrics will accompany the “Charter of the peoples of the world”, which will be delivered to the Secretary General of the United Nations, António Guterres, as a sign of popular rejection throughout the world of US persecution policies against the people of Venezuela.

The Ambassador concluded by stating that the Bolivarian Government promotes and practices a peace diplomacy and has always reiterated its support for any effort to resolve differences and controversies through understanding and dialogue.