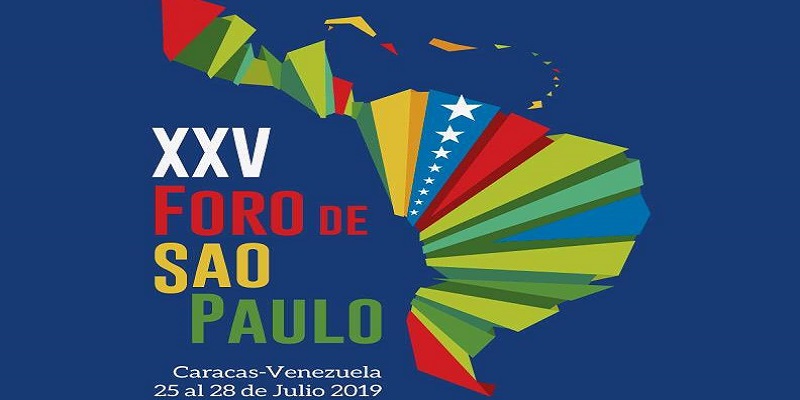 From July 25 to 28, the capital of the Bolivarian Republic of Venezuela, Caracas, will host the XXV Meeting of the Sao Paulo Forum that will be held under the motto “For Peace, Sovereignty and Prosperity of the Peoples”.

In this year’s meeting, debates and reflections are planned on the issues of the progress of neoliberalism and imperialism in the world and in the region, with its consequences such as increasing poverty, threats to democracy and peace, attempts at economic, political, social and even military interference in the region of Latin America and the Caribbean.

The objectives of this edition will focus on the issues of the struggle for peace in Colombia, for peace in Venezuela and for the support of the Norwegian Dialogues, for the Campaign Free Lula and persecuted politicians of the region, for the end of the economic blockade of Cuba, among other matters of collective interest.

This edition of the Sao Paulo Forum will bring together representatives of more than 125 movements and left-wing political parties in the world.

The first Vice-president of the United Socialist Party of Venezuela (Psuv) and president of the National Constituent Assembly (ANC) of Venezuela, Diosdado Cabello, announced on Monday the attendance of more than 800 leaders of political parties and social movements from different regions of the planet.

“Delegations come from Asia, Africa, North America, Latin America and the Caribbean, which will be here accompanying us in these different activities of discussion, analysis and proposals. The anti-imperialist world meets against those who believe they can control the world”, said the socialist leader in a press conference.

The president of the ANC believes that this XXV edition of the Sao Paulo Forum will be “a propitious scenario to show the world the reality of the national territory, which is manipulated by the communication corporations, a campaign recently exacerbated after the report of the United Nations Commissioner for Human Rights, Michelle Bachelet, who presented a deeply damaging text to the dignity of the Venezuelan people”.

“It occurs at a time of political and social situation in Venezuela, as a result of the attacks coming from the United States, in its attempted coup d’etat to overthrow the constitutional president, Nicolás Maduro Moros”, said the diplomat.

Since its inception in 1990, the Sao Paulo Forum meets regularly to exchange experiences and share ideas to strengthen the struggle of our peoples for sovereignty, democracy, social justice, sustainable development and social inclusion in our region.