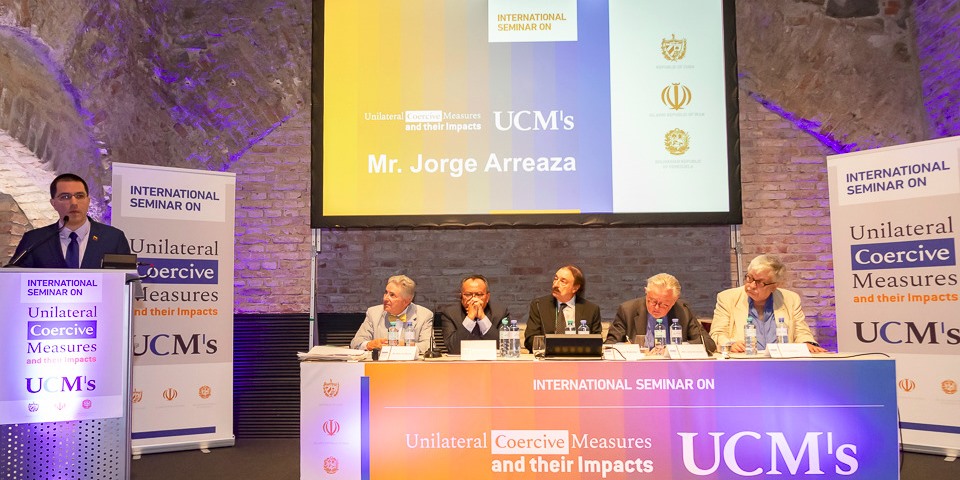 The unilateral coercive measures adopted illegally by the US government aim to avoid the independence of national processes and impose a model that obeys to their economic interests, emphasized Thursday the Foreign Minister of the Bolivarian Republic of Venezuela, Jorge Arreaza.

During his speech at the International Seminar on Unilateral Coercive Measures (MCU) and its Impacts, which took place in Vienna, the Venezuelan diplomat denounced the harmful effects of the arbitrary sanctions that Washington has imposed on Caracas.

“What kind of moral or legal authority a State intends to impose, even sanction, another country. In which article of the UN Charter a government is allowed to unilaterally pressure another through economic means to achieve the objectives of that country”, he questioned.

FM Arreaza cited, in this context, the report on the effects of illegal measures in the Venezuelan economy recently developed and disseminated by US economists Jeffrey Sachs and Mark Weisbrot, whose conclusions suggest that at least 40,000 Venezuelans have died as direct consequence of the sanctions of the United States.

In the financial field, he reiterated that the economic siege directed by the White House has resulted in the blockade of some 5 billion dollars of the Venezuelan State in European banks; Most of the assets, equivalent to € 1,543 million, are retained in Portugal’s Novo Banco.

The Venezuelan Foreign Minister also reaffirmed that these resources would be used for the purchase of medicines, food and other basic products to meet the needs of the population, as well as the purchase of materials to guarantee the functioning of the national oil industry.

In the same discursive line, the People’s Power Minister for Foreign Relations denounced the illegal confiscation of Citgo, a subsidiary of the state-owned Petroleos de Venezuela S.A. in the United States valued at more than 30 billion dollars.

“In early January, the Trump government decided to confiscate Citgo, take control of the company and say it is under the authority of a parallel government that they tried to impose earlier this year in Venezuela. We could not repatriate the profits of Citgo in 2017, nor 2018 nor now, nor be able to invest the resources of Citgo in the Venezuelan oil industry”, he recapped.

The diplomat maintains that the US, in addition to promote and support the conspiracies in Venezuela, intends to apply the thesis of the “hunger” of the Venezuelan people, with the purpose of creating a situation of generalized discontent that leads to the overthrow of the national government.

Foreign Minister Arreaza stressed that the effect of the coercive measures imposed by the United States against the Venezuelan economy, which could not be hidden by the United Nations High Commissioner for Human Rights, Michelle Bachelet, in her recent visit to the Latin American country.

“Ours is a continent in dispute and Venezuela is at the center of the dispute, because it is blessed with riches in almost inexhaustible natural resources”, he added.

The International Seminar on Unilateral Coercive Measures and its Impacts was co-organized by the permanent missions of Cuba, Iran and Venezuela in the Austrian capital, and experts such as Alfred de Zayas, Idriss Jazairy and Rahmat Mohammad participated.