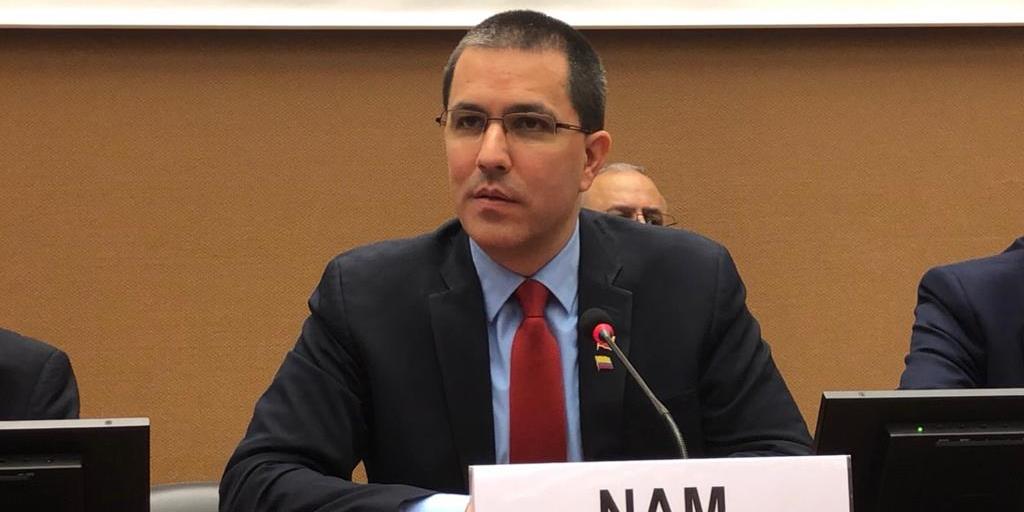 Venezuela denounces to Mnoal threats of US intervention

In the framework of the 40th session of the Human Rights Council of the United Nations (UN), the Foreign Minister of the Bolivarian Republic of Venezuela, Jorge Arreaza, held an important meeting on Wednesday with the ambassadors in Geneva of the States members of the Movement of Non-Aligned Countries (Mnoal), whose pro tempore presidency is held by the South American country.

In a broad speech, the Venezuelan diplomat denounced the interventionist policy adopted by the US government against Caracas, which has intensified during the administration of President Donald Trump.

“Venezuela is currently experiencing an unparalleled aggression in our history, we are being threatened by the most powerful army in the world, its Commander in Chief (Donald Trump) threatens the use of military power to force a regime change in Venezuela and they do it openly”, he emphasized.

In this area, he synthesized the harmful effects of the unilateral coercive measures imposed by the US government on Venezuela, which prevent the State from acquiring basic goods to meet the needs of the population.

“It’s a lot of hypocrisy, they block you and then they tell you they’ll send you humanitarian aid”, he reflected.

A coup plot with a stamp in Washington

During his speech, the People’s Power Minister for Foreign Relations also outlined the coup plan that has been tried to run in the Bolivarian Republic based on ignoring the presidential elections held in May 2018 and, consequently, President Nicolás Maduro.

In this regard, he recalled that the presidential elections emerged from an agreement in the dialogue process that took place last year in the Dominican Republic between representatives of the national executive and the opposition, which the opposition delegation later refused to sign.

“There was activated a plan directed from the United States: that the elections be held without the participation of a part of the opposition and a priori not knowing the result of the elections (…) The idea was to ignore the swearing in of President Nicolás Maduro and eventually recognize an unlawful swearing in of the president of the National Assembly (Juan Guaidó) as president of the Republic. This happened on January 23”, he specified.

Minister Arreaza reiterated his rejection to the matrix of “humanitarian crisis” on which it is intended to justify an intervention in Venezuela and warned the organism composed of 120 countries about the threats of the use of military force that, until now, the administration of Donald Trump does not rule out to unleash upon Caracas.

The meeting was attended by the Foreign Minister of the State of Palestine, Riad Malki and the Deputy Minister of Foreign Affairs of the Republic of Cuba, Marcelino Medina.