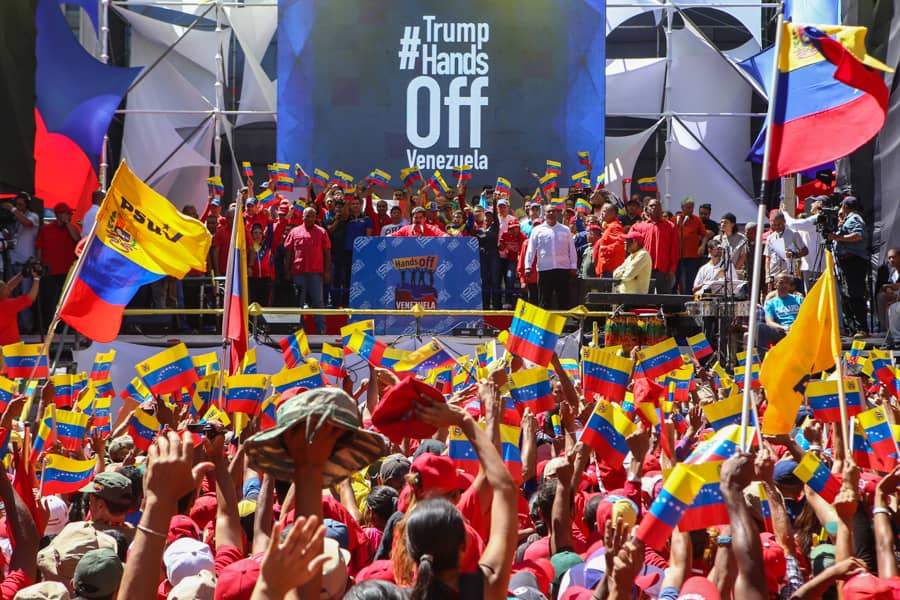 The President of the Bolivarian Republic of Venezuela, Nicolás Maduro, received on Saturday the great Mobilization for Dignity and in Defense of the Revolution, on Urdaneta Avenue of the Capital City.

“The people of Caracas went out to the streets to support peace, to support the civic-military union, to tell imperialism, to tell Donald Trump, to take his hands off Venezuela, Yankee Go Home”, said the Head of State in the beginning of his intervention.

“Tremendous march, tremendous mobilization since the early hours of the morning, the people was already mobilizing. Impressive awareness of the statements of men and women on foot, of the people, the invisible, those who never appear on the television networks, on international television, let us be proud of the strength we have, of courage, of the People’s Power, feel proud , because we, the invisible in Venezuela, are the indestructible”, he said.

The President highlighted that the country is fighting for the right to peace, with independence, with national integrity, with justice and social equality and with national dignity.

“We are fighting for the dignity of Venezuela before those who want to kneel the country to US imperialism, to the decadent oligarchy of Bogota, one of the most important battles that has taken place in 200 years, because we are defending the borders of the Homeland, the territorial integrity and the right to be free, sovereign and independent, that is the true defense of the Homeland”, he said.

He indicated that thirty days after the self-proclaimed president the defaulted deputy, Juan Guaidó, he asked himself: “what have you achieved? The elections should be today as mandated by the Constitution. Where is the call for presidential elections? We are waiting for the clown with a thousand faces. I challenge him to call elections”.

Likewise, the President of the Bolivarian Republic of Venezuela stated that 30 years later, the coup d’état has failed. “We have defeated them. They have failed and what are they going to do now? They will continue to play interventionism. Today they pretended another show. God’s time is perfect. There will be justice”.

“Traitors to the Homeland will dry up before the eyes of the people. The plan is unveiled. Trump is contemplating a military invasion in Venezuela”, he said.

Maduro called on the Venezuelan people to be aware, to reject threats of invasion and to raise the banners of peace.

In addition, he asserted that “I will never give up, I will always defend our country. To all the FANB I say to you: if someday you wake up with the news that they have done something to Nicolás Maduro, go out to the street, do not doubt it for a second”.

He said that peace will triumph in Venezuela with sovereignty. “We will be consolidating a great victory this year, I see it in the people. The hatred that has awakened a minority is very great. Trump hates Venezuela and the peoples of Latin America”, he said.

“The problems of Venezuelans must be solved by Venezuelans at home, without threats or the use of force to impose on a State. We are on the right side of history defending the Constitution and sovereignty”, he concluded.