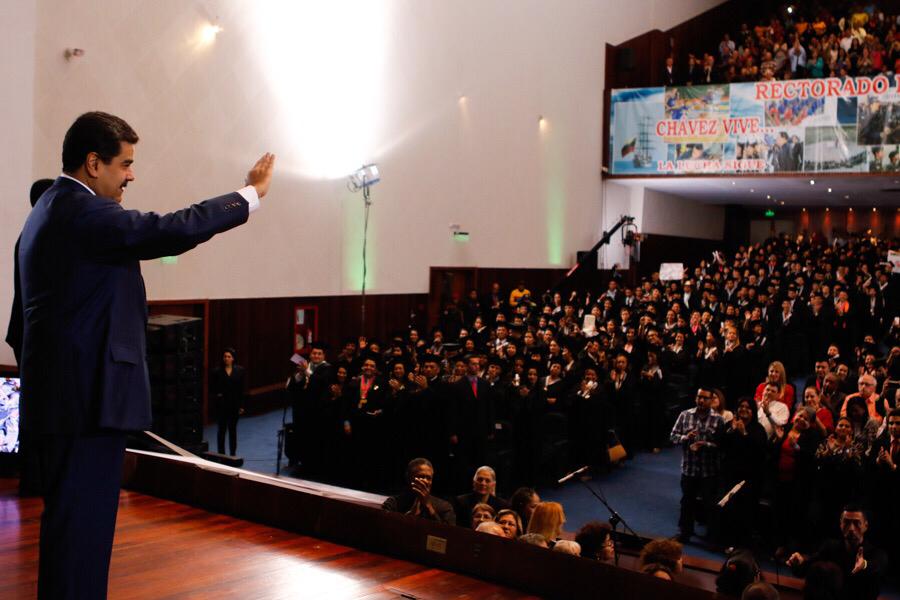 The president of the Bolivarian Republic of Venezuela, Nicolás Maduro, conferred on Thursday the titles to 880 graduates of the Simón Rodríguez educational micromission in different areas of teaching, in an event held at the Theatre of the Military Academy in Fuerte Tiuna, which included the presence of Foreign Minister Jorge Arreaza; the People’s Power Minister for Education, Aristóbulo Istúriz, and the People’s Power Minister for University Education, Science and Technology, Hugbel Roa.

During his speech, the National President highlighted the achievements in the educational field obtained by the Bolivarian Revolution in cooperation with the Bolivarian Alliance for the Peoples of Our America-Treaty of Commerce of the Peoples (ALBA-TCP).

“We are in the global vanguard, countries need education, culture, love and investment for life. In Venezuela we have reached the 90% of schooling and we have to go to the goal of 100%”, he said.

In addition, he assured that the Venezuelan education system is emerging as one of the best in the world.

“You will be the young generation that builds the scientific education, humanist, public, free and of the highest quality in the world, which will be the Venezuelan education for the years and decades to come”, he said.

While handing over the titles, the proposal presented to the first secretary of the Central Committee of the Communist Party of Cuba, Raúl Castro, was announced, in order to strengthen ALBA and therefore regional integration.

Regardig to the decolonization process that the new stage of the Revolution is proposing, President Maduro indicated that it must have concrete expressions in the education and in the way of life of our society. “Independence and decolonization that is the way”, he concluded.