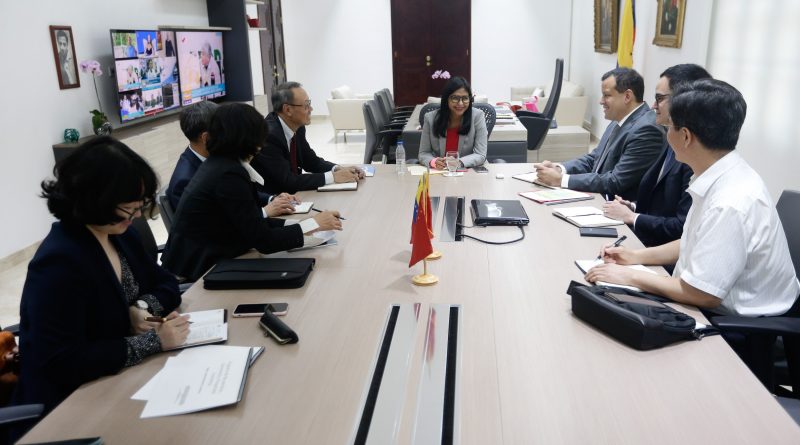 The Executive Vice President of the Republic, Delcy Rodríguez, held a strategic meeting with a delegation belonging to the China Development Bank (CDB), to strengthen the economic alliances between both nations, thus allowing the re-impelling of the 15 Productive Engines plus the Petro of the Bolivarian Economic Agenda.

This meeting was scheduled during the recent visit of the Head of State, Nicolás Maduro, to the People’s Republic of China, within the framework of the Economic Recovery, Growth and Prosperity Program.

In the activity, developed at the headquarters of the Vice Presidency of the Republic, were the advisor of the CDB, Tian Yunhai; the general manager of the Marketing Research of CDB Caracas, Hu Jianping; the general manager of Operations Coordination of CDB Caracas, Li Yi; the Deputy Directors of the Evaluation Department, Li Yue and Duan Jia; in addition to China’s ambassador accredited to Venezuela, Li Baorong.

It should be noted that during the presidential tour in the Asian country, Maduro met with the president of the CDB, Hu Huaibang, as well as with the head of the National Petroleum Corporation of China (CNPC), Wang Yilin, with the vision to deepen and expand the multidimensional relationship that both countries have built.

At the day’s closure, the National Head of State described as a “total success this state visit at the highest level. From a structural, reactive point of view, it relaunches China-Venezuela relations”.

In addition, during the closing of the XVI meeting of the Joint Commission, held in Beijing, 28 new strategic cooperation agreements were signed in the areas of oil, energy, mining, gold, iron, technology, education and culture.