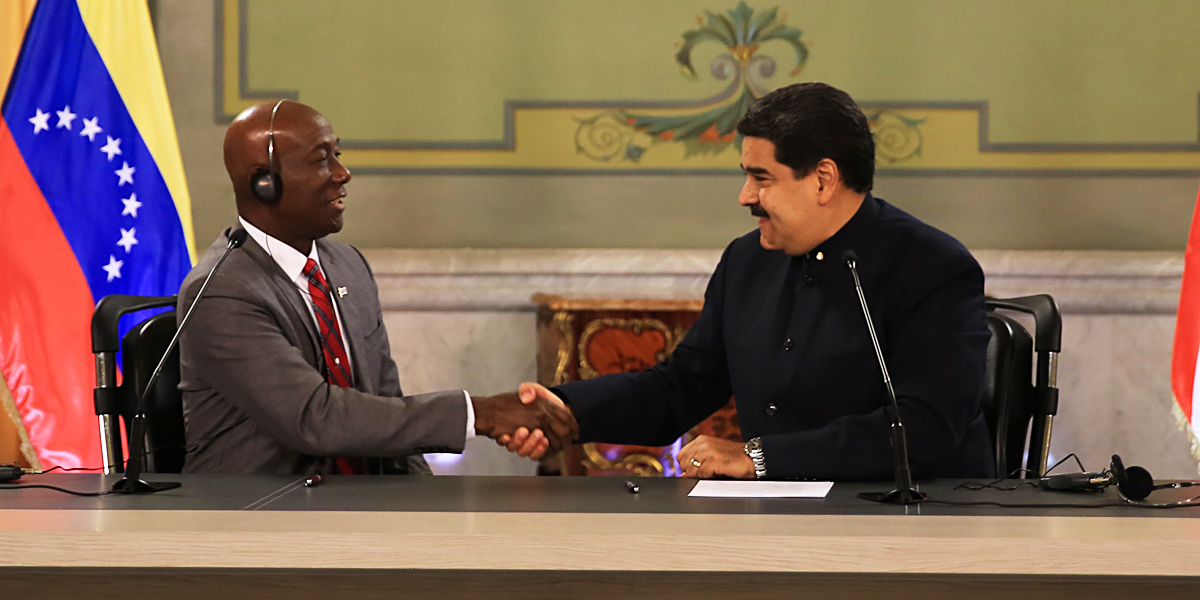 The Bolivarian Republic of Venezuela and the Republic of Trinidad and Tobago have ratified their willingness to strengthen their bilateral relations by signing energy agreements last Saturday during a meeting held in Caracas between President Nicolas Maduro and the Prime Minister Keith Rowley.

From the Miraflores presidential palace both parties signed the term sheet for the drafting of the gas export contract from Venezuela to the insular country; through such contract the binational energy integration shall be consolidated, based on the principles of reciprocity, solidarity, complementarity and respect for sovereignty.

Apart from this document, the parties signed a Joint Declaration strengthening the brotherly and cooperation bonds that have historically guided both nations, allowing the continuity of policies that contribute to the well-being of both peoples.

In this context, President Nicolas Maduro announced that Venezuela and Trinidad and Tobago have agreed to further develop a comprehensive partnership in the energy field which shall include, among other projects, the exploitation of oil, the development of the refinery process and the use of gas in all its forms.

“We share borders, we have common oil deposits and we shall exploit them in peace so that such wealth found in the grounds would benefit both peoples in peace; it is a great message that we are giving”, emphasized the Head of State who also instructed the Minister for Oil and president of PDVSA, Manuel Quevedo, to visit the insular nation soon with the aim of advancing the documents and agreements to consolidate the comprehensive energy partnership.

The Venezuelan president availed himself of the opportunity to highlight the need to cultivate good neighborly relations between both nations and move towards brotherly and solid cooperation relations.

During his address, he thanked the Prime Minister Keith Rowley for his efforts in the attainment of such agreements and he also thanked the company Shell which has joint the negotiations on this project.

“We are ready to work and do so well; if you want to come and invest, then invest all your resources in Venezuela”, added the president, referring to the company Shell.

On his part, the Prime Minister of Trinidad and Tobago highlighted the historical, geographical and geological ties binding both nations.

Likewise, he noted the importance of a consensus between both parties since the cooperation model between Venezuela and Trinidad and Tobago “has immense promises for our cooperation relations in different areas”.

In March 2017, the signing of the Framework Agreement on Gas Supply with Trinidad and Tobago took place in Caracas; such agreement included the creation of work committees between PDVSA and the Trinidadian state-owned company, National Group Gas, to establish gas supply mechanisms from Campo Dragon, located in the north of Sucre state, around 40 kilometers from the Paria Peninsula.

Thereafter the parties have met several times to negotiate the gas price, which shall enable to proceed with the export of this energy resource from Venezuela to Trinidad and Tobago.