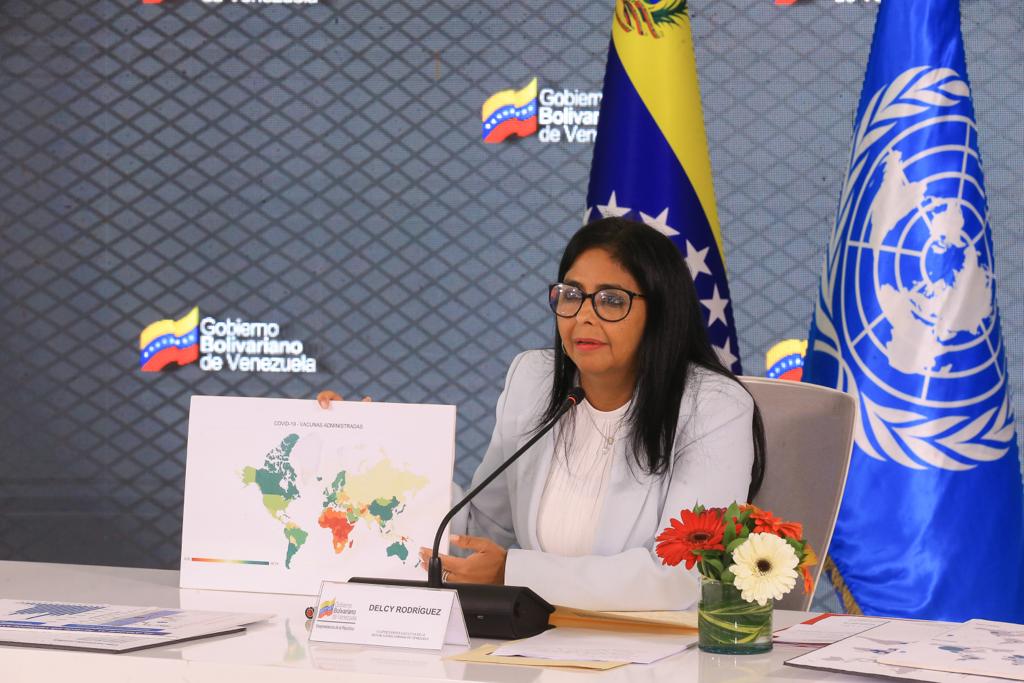 During the presentation of the Universal Periodic Review before the United Nations Organization (UN) in Geneva, Switzerland, the Executive Vice-president, Delcy Rodríguez Gómez, raised her voice to denounce, on behalf of the Bolivarian government, the negative impact of 502 unilateral coercive measures, applied by the White House against Venezuela, which have impeded the enjoyment of the fundamental rights of the people.

The diplomatic session before the UN Human Rights Council was held virtually and was conducive to making the world aware of the progress that Venezuela has achieved in terms of promoting and guaranteeing fundamental rights. Rodríguez highlighted the achievements of the social plans developed by the National Executive in favor of the great majority, to combat poverty and effectively address the Covid 19 pandemic, despite the sanctions imposed by the US government.

Unilateral coercive measures and their impact in Venezuela

Rodríguez made a chronology of the imperialist aggressions that Venezuela has suffered since the signing of the Barack Obama Decree, who declared Venezuela an “unusual and extraordinary threat to the foreign policy and national security of the United States” in 2015.

“It was the foundation of a network of coercive and unilateral measures and other types of restrictive and punitive measures without any basis, nor foundation in Public International Law that generated a network of illegal and illegitimate sanctioning measures against the entire Venezuelan people”.

Rodríguez denounced before Federico Villegas, president of the UN Human Rights Council and before the representatives of the 116 countries that signed up to participate in this third Universal Periodic Review.

The Vice-president reiterated that after these unilateral measures Venezuela has had less access in the field of Public International Law and in the full right, exercise and enjoyment of the Human Rights of the Venezuelan people. She also denounced the theft of Venezuela’s assets abroad and financial persecution by the United States.

Rodríguez pointed out that the Government of the United Kingdom, present in this Council, has adopted the illegitimate decision to seize the gold of the Venezuelan people, which has been denied even to attend the humanitarian situation generated by the COVID-19 pandemic.

Rodríguez warned about the neocolonizing and aggressor model that tries to coexist in the UN Human Rights Council and called for its revision:

“I think, president, dear representatives, that something is wrong when in the same room, in the same world house of guarantee and protection of human rights, both aggressors and victims of this type of hegemonic domination policies coexist”.

Faced with the serious human rights violations suffered by Venezuela and other peoples of the world due to coercive imperialist measures, the Vice-president denounced “indifference and complacency” in the face of measures that violate International Public Law. Likewise, she recalled that Venezuela denounced the US administration before the International Criminal Court (ICC) for the measures that violate human rights against the nation.

In this sense, Rodríguez highlighted that Venezuela signed a Memorandum of Understanding with the International Criminal Court to strengthen the capacities of the Venezuelan justice system in guaranteeing human rights through technical assistance. Likewise, she highlighted the cooperation of Venezuela with the Office of the High Commissioner for Human Rights of the UN.

Delcy Rodríguez made these complaints and presented the Universal Periodic Review to Federico Villegas, president of the UN Human Rights Council.