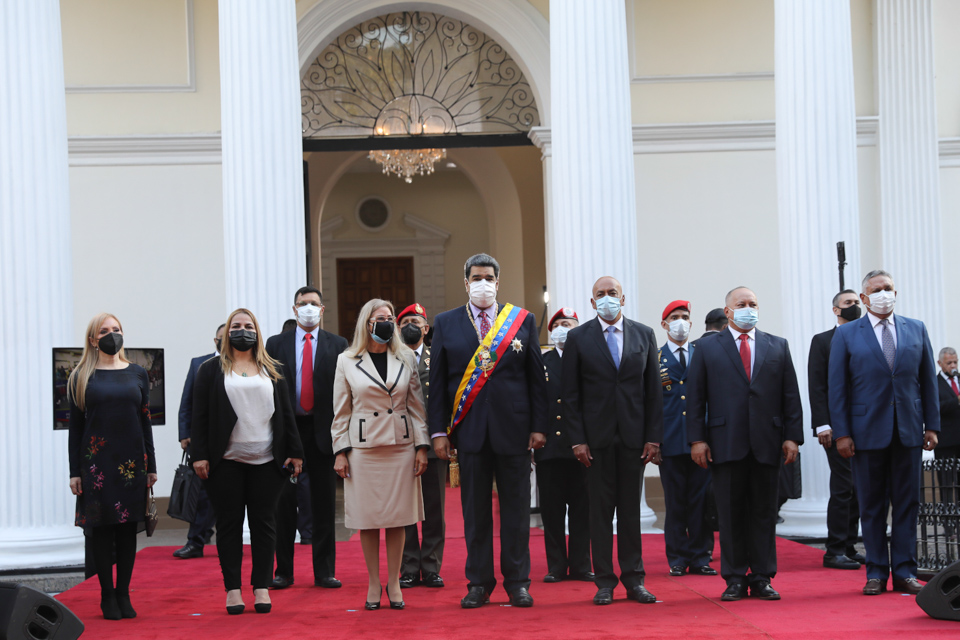 According to the Constitution of the Bolivarian Republic of Venezuela, President Nicolás Maduro delivered on Saturday his Annual Address to the Nation at the National Assembly, whose 2022 period of ordinary sessions was opened on January 5.

“Annually, within the first ten days following the installation of the National Assembly, in ordinary session, the President of the Republic shall present personally to the Assembly a message by which he will render account of the political, economic, social and administrative aspects of its administration during the past year,” reads Article 237 of the Constitution of the Bolivarian Republic of Venezuela, passed in 1999.

At 17:00, the Venezuelan head of State, in the company of First Combatant (First Lady) and member of the National Assembly Cilia Flores, arrived at the Federal Legislative Palace. On this occasion, the Annual Address took place in the open spaces of the Parliament as a biosecurity measure in the face of Sars-CoV-2.

In his New Year’s Eve address, broadcast on December 31, the Venezuelan president said that “the people’s protection will be our priority in the years to come,” which is why 76% of the National Budget will be allocated for social investment.

“The only thing that changed over the years is our effort to do it better, and only one thing is calling us all: the economic recovery of our country,” stressed Maduro.

In an interview with Spanish journalist Ignacio Ramonet, President Maduro said that “2021 has been the best year (in the fight) against the economic war,” something that’s evident in the reactivation of the domestic and foreign market, as well as in the gradual recovery of oil production.

By the end of 2021, Venezuela registered a daily production of 1 million barrels despite the aggressive economic, commercial restrictions imposed by the United States. Likewise, a new monetary expression of the Bolívar was established by eliminating six zeros, thus strengthening, “from a psychological point of view, the use of the Bolívar within a general context of economic improvement.”

Regarding COVID-19 prevention and control, the country managed to vaccinate over 905 of the population through a comprehensive campaign that includes children younger than 2 years old and adults older than 60 years old. This action was complemented by a house-to-house search of positive cases, hospitalization and treatment for mild, moderate and serious cases.

The year 2022 has been marked by the adoption of a new government’s management method called “1×10,” whose goal is to improve “our ways to connect with the people and find an interactive method of permanent communication and solutions.”