President Maduro to Algeria's Ambassador: 'It's been six years promoting the unity among the peoples' - MPPRE 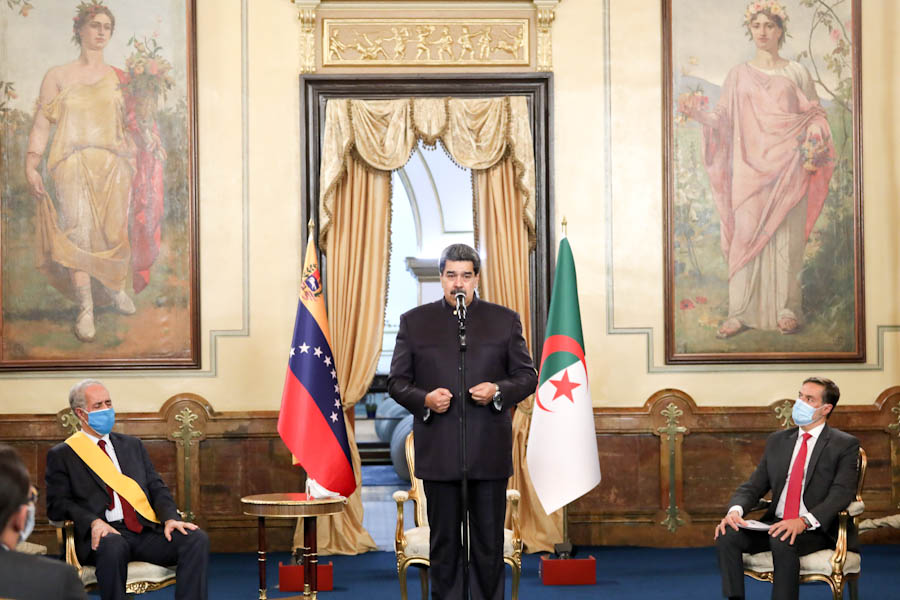 “It’s very important, to me personally, to recognize a man like Ambassador Ben Moussat, who arrived in Venezuela on February 28, 2015, and it’s been 6 years promoting cooperation and unity among the peoples from Algeria, Venezuela, Africa, South America,” said President Nicolás Maduro at a farewell event to honor the Ambassador of the People’s Democratic Republic of Algeria to Venezuela, Ben Moussat Ghaouti, who’s terminating his diplomatic mission to take on other responsibilities.

Maduro stressed Moussat’s initiative for the union of the people and his work as a defender of the countries’ sovereignty.

“Ambassador, you played a leading role in the initiatives to move forward towards the consolidation of the Africa’s House in Venezuela project. We think that the day Africa and South America manage to set up a network of relations in maritime, air public transport, exchange of merchandise, trade, energy, investment, culture, politics and the interaction among peoples, another world will be possible,” said the Venezuelan president.

Maduro thanked the Diplomatic Coprs for attending this event to recognize the Algerian ambassador, and reiterated that the two nations are on the right side of history.

“We, Mr. Ambassador, are on the right side of history because we want peace, cooperation, the survival of the planet, justice, equality and joint progress […], the 21st century will be the end of hegemonic empires,” he said.

Ambassador Moussat thanked President Maduro for the ties of love and friendship that have been consolidated in the last years.