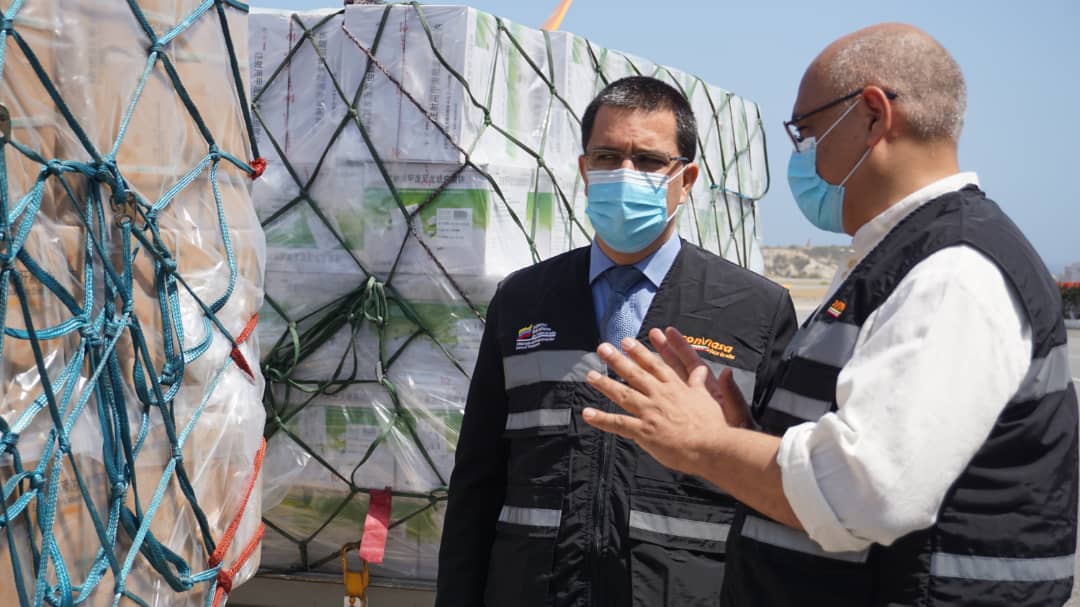 On Tuesday, the tenth flight of the permanent air bridge established with the People’s Republic of China arrived in Venezuela, within the framework of the technical cooperation for the prevention and control of COVID-19, carrying around 25 tons for a total of over 246 tons of supplies since March 2020.

At the “Simón Bolívar” International Airport of Maiquetía, the reception of the cargo, transported in an aircraft of the state-owned Conviasa airline, was in charge of the Minister of People’s Power for Foreign Affairs, Jorge Arreaza, and Health, Carlos Alvarado.

Foreign Minister Arreaza highlighted that these 25 tons of treatments and clinical supplies would allow the nation to continue offering Venezuelan COVID-19 patients the best care free of charge.

Arreaza added that this tenth flight completes the 246 tons coming from the People’s Republic of China. More than 550 tons of the shipments arrived through the cooperation and purchase agreements signed by the Venezuelan State with other countries and multilateral organizations.

The Venezuelan foreign minister also stressed the extraordinary effort made by the Bolivarian Government to purchase and acquire these supplies, considering the blockade, the obstacles, and Venezuela’s frozen money abroad as a result of the unilateral coercive measures imposed by the United States and servile governments, which have had a devastating impact on the Venezuelan people, according to the appreciation of the UN rapporteur, Alena Douhan, during her recent visit to the Caribbean nation.

Likewise, Minister Carlos Alvarado thanked the Chinese people and Government for the arrival of this new flight, with supplies mainly destined to intensive care units of healthcare centers authorized to attend to COVID-19 patients.

He also said that the Sputnik-V vaccination of health personnel directly involved in the care of those infected with the new coronavirus is progressing successfully.

Thanks to the permanent air bridge between Venezuela and China to address the COVID-19 pandemic, which began in March last year, 28,450,304 supplies have arrived in the country, including more than 2 million rapid detection tests, 978,504 PCR diagnostic kits, more than 9.6 million masks, as well as more than 1,520 medical kits and more than 7 million units of medicines.