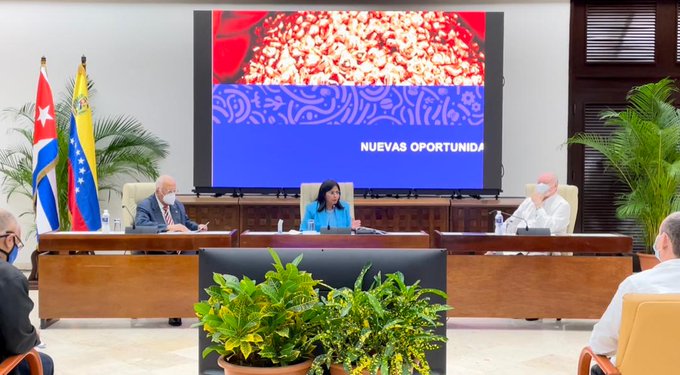 The Executive Vice-president of the Bolivarian Republic of Venezuela, Delcy Rodríguez, presented this Saturday to the Republic of Cuba the advantages and benefits of the Anti-Blockade Law for National Development and the Guarantees of Human Rights, promoted by the Head of State, Nicolás Maduro, for the protection of the Venezuelan people.

The intent of this law is to effectively protect foreign investors and thereby prevent their prosecution by the United States Government.

In this sense, Rodríguez held a working meeting with representatives of the Cuban government and businessmen, in which she addressed the commercial and financial opportunities that Venezuela offers to the sister nation of Cuba in terms of trade, telecommunications, tourism and health, among other sectors.

The high level of bilateral trade relations between both countries was seen as a threat by the North American empire, which now applies a set of measures to hinder the economic development of the Homeland.

Given this, the Antiblocking Law is called to protect the people of Venezuela, partners and investors, under new forms of association, in addition to having special forms of information protection for those who come to invest in Venezuela.