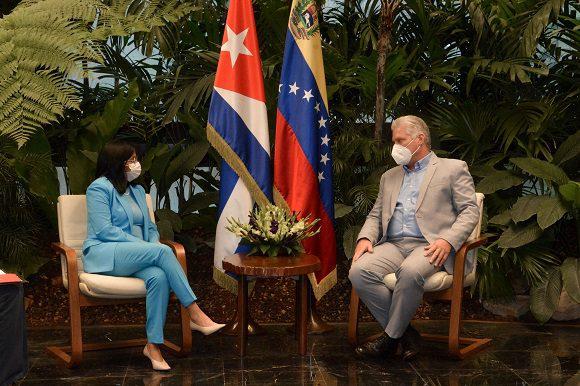 The Executive Vice-president of the Bolivarian Republic of Venezuela, Delcy Rodríguez, held this Saturday a broad and fruitful meeting with the President of the Republic of Cuba, Miguel Díaz-Canel, in which they expressed satisfaction with the excellent state of bilateral relations between the two countries and their upward development.

About the visit instructed by the Venezuelan Head of State, Nicolás Maduro, Díaz-Canel extended his congratulations to the Executive Vice-president for the recovery of the National Assembly (AN) under the democratic exercise of the vote, which once again demonstrated the political maturity of the Venezuelan people.

Likewise, he sent a fraternal greeting to President Maduro with the commitment to continue consolidating the alliances between both nations, for the benefit of the peoples.

Cuba and Venezuela consolidate two decades of relations of mutual cooperation, based on respect for the self-determination of the peoples, the cooperation and humanism that the historic revolutionary leaders, Fidel Castro and Hugo Chávez, sowed and which today the presidents Nicolás Maduro and Miguel Díaz-Canel maintain as an irreducible legacy.