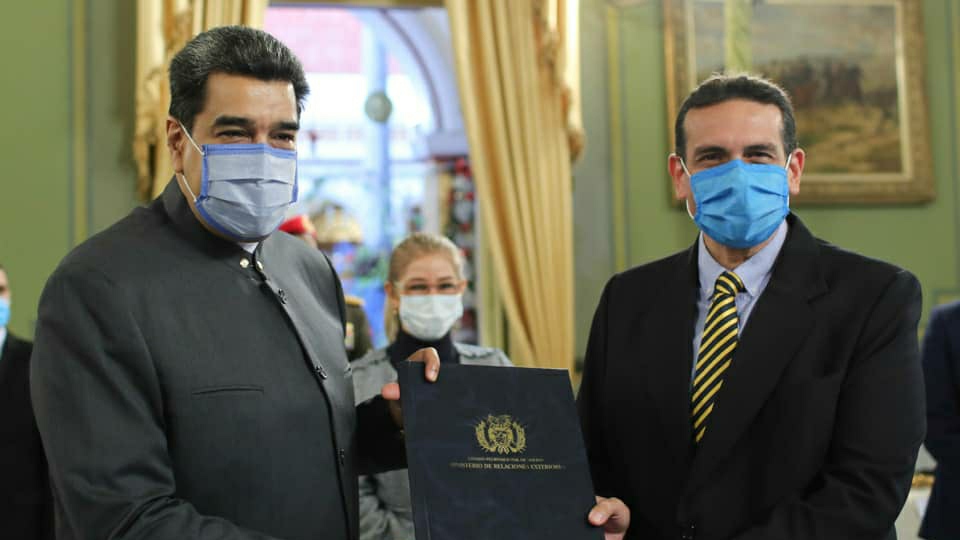 The Head of State and Government, Nicolás Maduro Moros, received from the hands of His Excellency Sebastián Rodrigo Michel Hoffmann, the Credentials that designate him as extraordinary and plenipotentiary Ambassador of the Plurinational State of Bolivia, before the Bolivarian Republic of Venezuela.

The diplomatic management is carried out on the afternoon of this Thursday, January 14, after the appointment issued by the President of Bolivia, Luis Alberto Arce Catacora, who through his Government maintains relations of friendship and reciprocity with the Bolivarian Republic of Venezuela.

In a ceremony held in the Sol del Peru room, in the Miraflores Palace, the national president held the meeting with the honors corresponding to his investiture.

Venezuela, through the Bolivarian Diplomacy of Peace, ratifies the principles of humanity, solidarity, cooperation and respect for the self-determination of the peoples with the governments of the world.

Especially with the Plurinational State of Bolivia, brotherhood relations have been cultivated through the Latin American and Caribbean integration blocs such as the Bolivarian Alliance for the Peoples of Our America – Peoples’ Trade Treaty or ALBA-TCP and the Union of South American Nations (Unasur).

During the government of the former president, Evo Morales, who demonstrated his attachment to the brotherhood between the peoples of Bolivia and Venezuela, Michel Hoffmann, served as Bolivian ambassador to the Venezuelan nation, from January 5, 2018 to November 15, 2019.

Both nations raise the flags of Bolivarianism, the anti-imperialist struggles and the just causes of the peoples of the world and align themselves in the construction of a multicenter and pluripolar world.