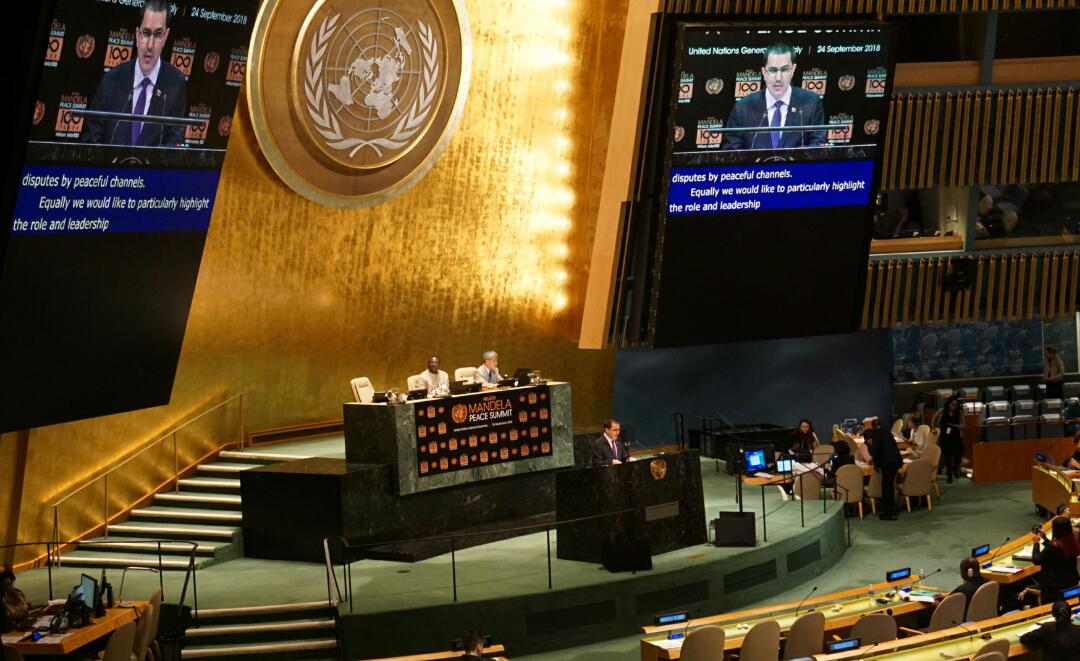 Thank you very much, for the Bolivarian Republic of Venezuela is an immense honor to speak on behalf of the 120 member States that make up the Non-Aligned Movement in this historic Peace Summit, which serves to commemorate Nelson Mandela’s centenary. During the 18th Midterm Ministerial Conference of the Non-Aligned Movement held in April 2018 in the city of Baku, Azerbaijan, the ministers adopted a special declaration to commemorate the centenary of the birth of Nelson Mandela, in which the international community was urged to use this occasion to intensify efforts aimed to manage, among others, the challenges posed by poverty and underdevelopment and promoting the peaceful resolution of conflicts. On that occasion, the ministers also reaffirmed that the life lessons of Nelson Mandela coincide with the fundamental principles, values ​​and objectives of the Non-Aligned Movement. What are these principles? Mutual respect for the sovereignty and territorial integrity of the others, the non-aggression and non-interference in the internal affairs of the others, equality and mutual benefit. Peaceful coexistence and the settlement of international disputes through peaceful methods. Similarly, we cannot emphasize enough the role and leadership that Nelson Mandela played in conjunction with our Movement, which he presided between 1998 and 1999, on the struggle against colonialism, racial discrimination and apartheid, particularly in South Africa which liberation constituted a decisive milestone in the life of our Movement. Nelson Mandela is one of the immense leaders of our era, his legacy continues to be a source of inspiration through his example of courage, service, forgiveness, reconciliation and compassion. In this sense and what is most important, in order to honor his legacy, we must translate our words into actions. As Nelson Mandela himself signed in 2004, «peace is not only the absence of conflict», therefore we must redouble our efforts to establish the conditions that lead to a sustained peace and to genuinely promote a culture of peace in the whole world, including, among others, the healing of root causes of terrorism and extremism, poverty in all its forms and dimensions, discrimination and xenophobia, intolerance and social injustice. In this regard, the member states of the Non-Aligned Movement are faithful to their commitment to strengthen their role and position as an anti-war and peace-loving force, and to establish a peaceful and prosperous world; as well as a fair and equitable world order, considering that the 2030 agenda for sustainable development offers a margin of action in favor of people, humanity, the planet and prosperity, in which no one is left behind. Also looking to strengthen universal peace as greater freedom. At the same time, it is also recognized that the eradication of poverty in all its forms and dimensions, including extreme poverty, constitutes the greatest global challenge and is a prerequisite for achieving sustainable development. Hence, today we use this opportunity to renew our commitment to the effective implementation of this beautiful 2030 agenda to reaffirm our promise that no one is left behind. We also reiterate our commitment to honor the legacy of Nelson Mandela and to keep his principles alive, including solidarity and selfless dedication to the serve humanity. In particular in the areas of conflict resolution, interracial relations, the promotion and protection of human rights, reconciliation, gender equality, the rights of children and other vulnerable groups. In the struggle for democracy at the international level and the culture of peace throughout the world, as well as in favor also of the poorest and most underdeveloped communities. To conclude, the Movement of Non-Aligned Countries looks forward to the different activities and initiatives to be held in the framework of the peace decade Nelson Mandela 2019-2028, while calling for the active participation of the international community. Let’s commit ourselves, as Madiba said, «with the construction of a complete, just and lasting peace», let’s do it for present and future generations, and if they allow us, for the Bolivarian Republic of Venezuela is a privilege to be able to do and be part of this tribute, of this resolution for Nelson Mandela. Madiba is a founding member, reference of the Bolivarian Revolution, of all the beauty of humanity. And for us it is not an act of diplomacy, nor an act of hypocrisy, nor a simulacrum, nor a pose, it is being able to pay homage to one of our parents, Nelson Mandela. The man of solidarity, the man of equality. A socialist in the best term of the word, an integral socialist who fought for peace, for the beauty of humanity. Thank you very much.
Buscar