Speech by Alexander Yánez, vice minister for Multilateral Affairs at the Conference on Disarmament 2020 - MPPRE 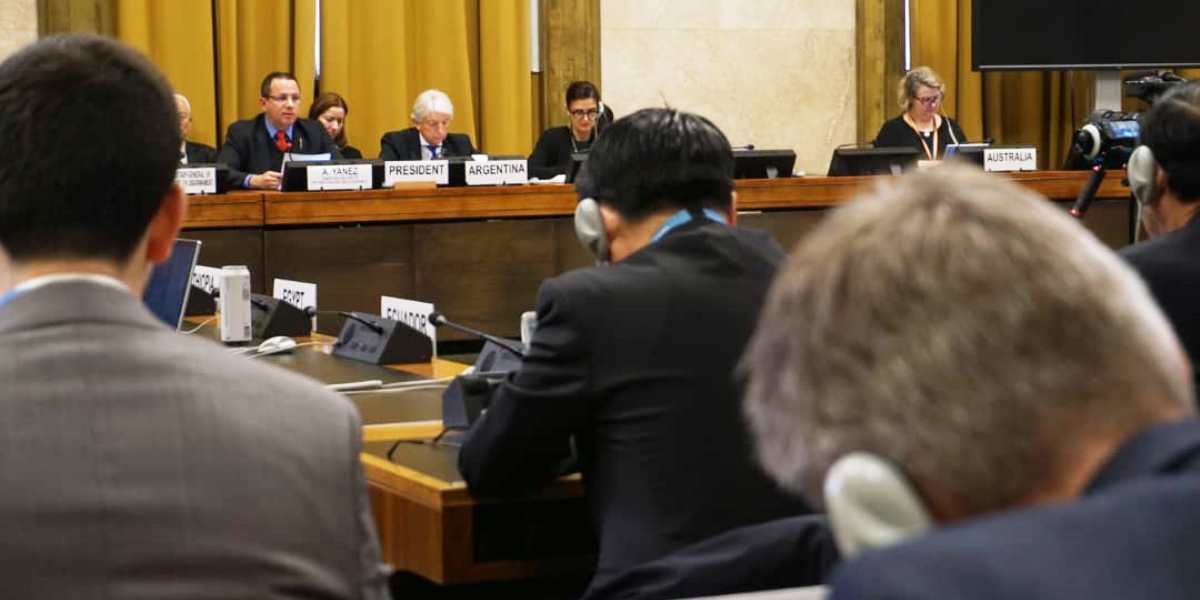 SPEECH BY ALEXANDER YANEZ, VICE MINISTER FOR MULTILATERAL AFFAIRS AT THE CONFERENCE ON DISARMAMENT 2020

Greetings to all delegates present. The Bolivarian Republic of Venezuela congratulates the Argentine Republic on taking the Chair of the Conference on Disarmament at its 2020 session.

The 2020 Review Conference of the Parties to the Treaty on the Non-Proliferation of Nuclear Weapons (NPT) will provide an opportunity to assess the status of implementation of political and legal commitments on non-proliferation, disarmament and the peaceful uses of nuclear energy.

The NPT, which Venezuela has taken on with determination, is the legally binding instrument with the greatest number of accessions in the field of general arms control. The Non-Aligned Movement (NAM) has strongly advocated the need to fulfill its commitments.

As a non-nuclear-weapon country, Venezuela, with its Bolivarian Diplomacy of Peace, advocates the implementation of Article VI of the NPT, through which the States Parties undertake to pursue negotiations in good faith on effective measures relating to cessation of the nuclear arms race and to nuclear disarmament, and on a treaty on general and complete disarmament under strict and effective international control.

This year 2020, alongside the NPT Review Conference, the Conference on Disarmament has an obligation to pave the way for a world free of the threat of nuclear weapons, in support of compliance with article VI of the NPT.

This will only be possible if there is the political will of States to recognize disarmament priorities, to negotiate and to effectively commit themselves to fulfilling their obligations. The NPT Review Conference must work in that direction.

The security environment should not prevent further progress on nuclear disarmament. Venezuela is convinced that disarmament, non-proliferation and arms control, together with the enhancement of confidence-building and restoration measures, can contribute to reducing existing tensions.

Today, more than ever, it is necessary to take full advantage of the potential that exists in the disarmament machinery in all its extension and capacities.

All previous speakers have emphasized the importance of this Conference and its special nature as the only body with a specific mandate to negotiate legally binding instruments in the field of disarmament. It has enough potential to proceed immediately in that regard.

It is imperative to start negotiations on binding instruments banning the production of fissile material for nuclear weapons, with specific verification provisions covering stocks of such weapons, the prevention of an arms race in outer space, as well as negative security assurances.

The Bolivarian Republic of Venezuela advocates general disarmament, non-proliferation and the peaceful use of nuclear energy and, therefore, calls on the Conference to recover its mission by urgently adopting a comprehensive and balanced work program that takes into account disarmament-related priorities.

It is clear that the stagnation of the Conference, for more than twenty years, is not due to defects in the working methods or in its Rules of Procedure.

The evidence indicates that in recent years the Conference has not made progress in fulfilling its mandate because one Delegation, guided by supremacist purposes, has made the negotiation of legally binding documents on the revision of the working methods. The Biological Weapons Agreement and the Chemical Weapons Agreement were successfully conceived under these same regulations.

Only the complete elimination of nuclear weapons can ensure the self-preservation of humankind. Venezuela supports all initiatives aimed at achieving general and complete disarmament. It considers that these weapons represent a denial of the human beings and of life on the planet.

The Bolivarian Republic of Venezuela supports all regional measures that can contribute to the establishment of a universal multilateral commitment to disarmament.

Latin America and the Caribbean is a peace zone, free of nuclear weapons. This was established by the 1967 Treaty of Tlatelolco and declared by the Summit of the Community of Latin American and Caribbean States (Celac), held in Havana, Cuba, in 2014. There the Heads of State and Government undertook the commitment not to allow or give space to the devastating nuclear or any other type of weapons. Nuclear-weapon-free zones are an efficient means of strengthening the concept of a global ban.

Venezuela welcomes all regions to make a determined effort to become mirrors of this essential international value and firmly condemns any attempt to promote and facilitate armament in any of its manifestations.

The year 2020 began with the aggression of a nuclear-weapon country against a non-nuclear-weapon country. A great Iranian military leader, General Soleimani, an emblem of the fight against terrorism, was assassinated, in contravention of the most elementary principles of international law. It was, without a doubt, an act of terrorism of state that generated new tensions in the region.

In this sense, Venezuela is suffering the application of criminal unilateral coercive measures, imposed by the government of the United States causing death, pain and suffering to the Venezuelan people. These measures constitute crimes against humanity; therefore, the government of President Nicolás Maduro Moros submitted a complaint to the International Criminal Court. We hope that those guilty of these crimes will pay for them This Conference is the appropriate forum to strengthen those initiatives that contribute to build consensus for the creation of legally binding instruments aimed at preventing arms race and nuclear war, protect the non-nuclear-weapon countries and ban the placement and use of weapons in the space.

Venezuela reaffirms the relevance of promoting multilateralism, as an elementary principle for negotiations concerning disarmament and non-proliferation. In this regard, Venezuela reaffirms the relevance of the convening of the Fourth Special Session of the United Nations General Assembly devoted to Disarmament (SSOD-IV). This remains the most appropriate forum to promote the priorities established by SSOD-I, including nuclear disarmament as the highest priority for the international community.

The Conference on Disarmament cannot continue to postpone the start of its substantive work. The urgency with which we undertake this task will determine the validity and even the relevance of this forum. We must begin by reaching agreement on the work program and a timetable of activities.

We are confident that during the year 2020 the Conference can make progress in building the consensus necessary to ensure international peace and security.