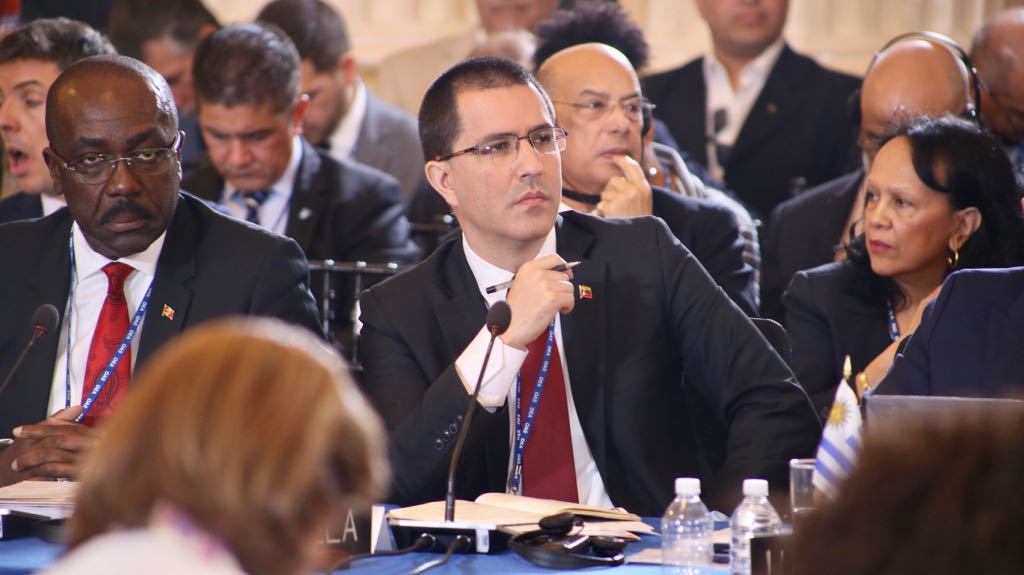 An attempt is being made here to organize a strategy against Venezuela. It is illegal, spurious; it does not exist in law. It is undignified, ethically and openly in violation of international law, the United Nations Charter and this organization’s own Charter, as we said throughout the morning. It is a tragedy. The tragedy of an organization that is useless. I repeat, useless to attend to the great problems of our peoples. It has unfortunately recovered its role as the Department of Colonies of the U.S. Empire. And what is the comedy, you may ask. The comedy of this story is that they are attempting to expel, to suspend, Venezuela when Venezuela is already no longer part of this organization. All of you know that Venezuela, in legitimate use of its sovereignty, on April 28, 2017, denounced the OAS Constitutive Treaty and began the process for its formal withdrawal. Is this not tragicomic? To approve the expulsion from, a sanction by, an organization from which the State had already decided to withdraw in a sovereign manner. That is why, upon ratifying our denouncing of the Constitutive Treaty of these bodies, we denounce the United States as being the country that has perverted this organization. Today the OAS is a multilateral organization that practices unilateralism, where a double standard reigns: the arrogant behavior of a State against that of the majority. Let us recall that Venezuela had already denounced the Inter-American Treaty of Reciprocal Assistance (TIAR, by its Spanish language acronym) in 2009. We decided to withdraw from the Inter-American System on Human Rights and the Inter-American System of Justice in such a way that the step we took last year was the next logical step in what for us is a failed Inter-American System. We also denounce the fierce pressure received by some sibling governments, some of whom are small countries, to attack Venezuela and join the initiative of bigger countries. All sorts of pressure. It reminds us of those years when Cuba was also attacked by this institution, when great pressure was applied to finally make that grim decision. The Vice President of the United States, Mike Pence, was right here. He gave instructions; he orders and the gentlemen who have joined together against Venezuela, the governments who have joined together against Venezuela, tomorrow want to tell Mr. Pence and Mr. Pence, as they say in the military: mission accomplished. We did what you ordered us to do. It is outrageous. Just as it is outrageous to consider that Caribbean countries, as the U.S. Ambassador said here, Caribbean countries have to do what the United States wants, and that the U.S. will no longer offer support to those Caribbean countries who decide for themselves. Our response to the U.S.: Keep the OAS. We are not interested in it. We will give it to you. We can tie a nice bow around it and give it to you. For us, withdrawing from the OAS is a cause for joy; it asserts our sovereignty, our independence. And we are proud to no longer belong to this institution. Last year, on August 8, President Trump threatened Venezuela with the use of force, in violation of a founding principle that appears in the first clauses of the United Nations Charter. What was the reaction by the OAS? None. Simply put, the greatest military power in the world threatened a member of the OAS , a member of the United Nations, and our friends at the OAS were not concerned in the least. Article 21 – not of the Democratic Charter but of the OAS – establishes that the territory of a State is inviolable. It cannot be subject to military occupation nor to other forceful measures taken by a member State directly or indirectly, regardless of the motive, even if it is temporary. I have here the minutes, and with this I will begin to conclude, of the conference, the Tenth Meeting of Consultation of Foreign Ministers, this was in the years 1965 to 1970, regarding the invasion of the Dominican Republic. Note what they resolved:

“To address an urgent appeal to all member states to place at the disposal of the General Secretariat of the Organization of American States, to the extent of their capabilities, trained medical personnel, food, medicines, and medical supplies to be sent immediately to the Dominican Republic for the humanitarian purpose of giving succor to the population of that country, according to their needs and without regard to their participation in the disturbances.”

The Humanitarian Crisis. And what did they immediately resolve?

“To request governments of member states that are willing and capable of doing so to make contingents of their land, naval, air or police forces available to the Organization of American States, within their capabilities and to the extent they can do so, to form an Inter-American force that will operate under the authority of this Tenth Meeting of Consultation.”

What was that? When you search an encyclopedia or on the Internet for what happened in the Dominican Republic in 1965, it is the United States invasion, endorsed by this organization. How many years have passed? And now they are attempting to do the exact same thing with Venezuela. We insist that Venezuela is a country that is able to defend itself. Its people are absolutely aware of the need to defend the country and nothing like this will ever occur. Because if they suffered defeats in Vietnam, they will suffer a thousand defeats in a Latin America on fire, should there be an attack on Venezuela. Since 2014, fourteen legal instruments have been issued: laws, decrees or regulations that sanction the Bolivarian Republic of Venezuela. In just two years, the administration of Donald Trump has already enacted four rounds of sanctions. Since 2017, the U.S. has opted to punish Venezuela through the application of unilateral and coercive sanctions, particularly in the economic and financial fields, of the same form they have applied against countries the U.S. Empire has conflicts with, like Cuba, Russia, Iran and Syria, among others. These measures, sirs, are harming the Venezuelan people. When we cannot acquire medical supplies, medicine, supplies for production, raw materials, when we cannot trade our bonds to lift our finances, when we receive no types of loans or lines of credit from international bodies, it is precisely due to these sanctions. What are they playing at? Why this cynicism? As I said to Mr. Pompeo this morning: why this cynicism? They wish to strangle, to besiege, to isolate Venezuela and then they say: No, we will send humanitarian aid to Venezuela. It is all a screen, a guise to justify aggression against Venezuela. The U.S. orders banks to retain funds or block accounts of natural and legal Venezuelan persons, as well as foreigner who wish to maintain commercial relations with Venezuela. They also bring the European Union along with them, for them to sanction Venezuela. The measures by Washington and its international allies against the Bolivarian Republic of Venezuela are causing pain and suffering among the Venezuelan people. This is cynical behavior, it cannot be hidden from impartial observers, and it is a new attack on the principles that govern coexistence among States, on the principles of the constitutive charter of this organization. We will never again be a colony. The humble peoples of Latin America, led by Simón Bolívar, threw the era’s biggest empire out from this continent. We know how to do it, and as such we are not intimidated in the least by the threats, the militarist, supremacist, racist rhetoric from Washington. If the U.S. and its satellite government wish to help the Venezuelan people, they need do only one thing: immediately dismantle this farce and this campaign of aggression; withdraw the sanctions; cease the financial persecution and end the economic and political aggression against the Venezuelan people; respect Venezuelan democracy and its institutions; and return to relations of cooperation with our country. We insist – President Nicolás Maduro has said it a thousand times – that if you wish to discuss Venezuela’s problems, we have the CELAC, the Community of Latin American and Caribbean States. Let us meet there. President Nicolás Maduro will defend the truth about Venezuela in all its aspects and in all fields, but do not assault Venezuela. How many of you, how many of your president have called President Nicolás Maduro? To ask him how to help, how to cooperate, how to come up with solutions. It is truly sad. It is sad. We will continue denouncing the construction of Mr. Trump’s detestable wall, a political and human aberration, a monstrosity of an anachronistic, anti-historic mentality, as well as the expulsion of migrants and the suspension of TPS that attack the peoples of our America. It is a time for unity in Latin America and the Caribbean. Never before has there been such a brazen, imperialist government that insults, as they have insulted the peoples of Our America. Insults that we cannot repeat here. It is time to close ranks among us. Let us not give in, friends, dear friends of the Greater Homeland. Here we are in the main hall of the OAS. So it is good to remember Bolívar today, right here, to invoke his infinite example in the struggle for the independence and liberty of our peoples, his vision of the future. That is why I wish to close with a quote from The Liberator Simón Bolívar, which gives us hope and for which we have struggled. “Peace will be my port, my glory, my reward, my happiness and all that is beautiful in the world.” The Liberator said that on July 23, 1820, and Venezuela, upon withdrawing from the OAS – we are counting down the days – on withdrawing from the OAS we are guaranteeing our country’s peace. Thank you.
Buscar