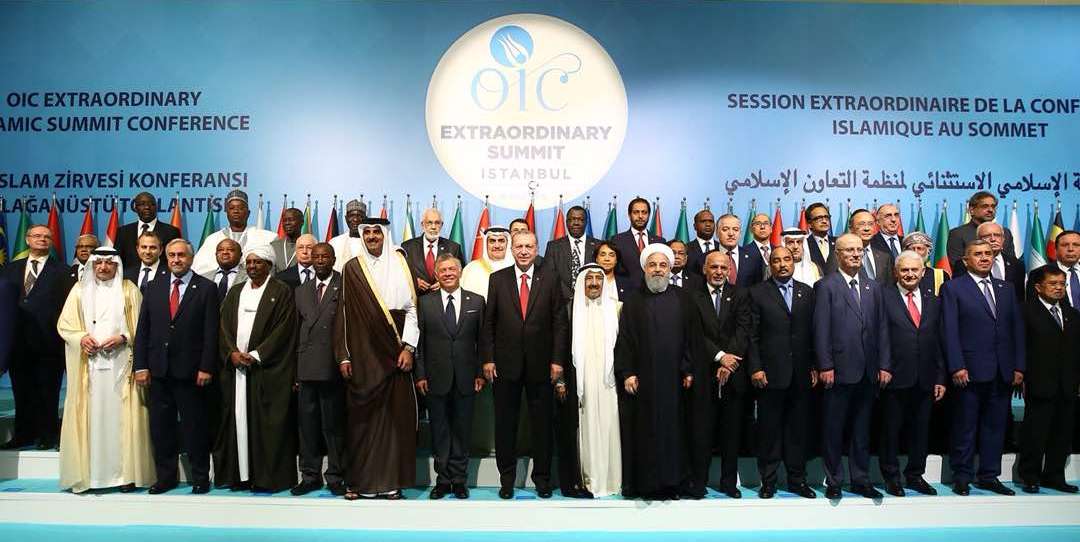 Statement by his Excellency Mr. Samuel Moncada, Ambassador, Vice-Minister for Foreign Affairs of the Bolivarian Republic of Venezuela on behalf of the Non-Aligned Movement, during the 17th Extraordinary Islamic Summit Conference on the cause of Palestine and the status of Jerusalem Istanbul, May 18th, 2018 Mr. President, With a great sense of responsibility, the Bolivarian Republic of Venezuela speaks on behalf of the Non-Aligned movement (NAM), during this emergency Summit of the Islamic Cooperation Organization, in order to address a historically important cause for us. Mr. President, More than five months ago, the Non-Aligned Movement Coordination Bureau published a communiqué expressing its profound concern about the continuous violations in the Occupied Palestinian Territory by Israel, as the occupying power, the attempts aimed at changing Jerusalem city demographic composition, status and nature – particularly, the recognition of the sacred city as the “Capital of Israel” – and the stated purposes and plans announced, in that opportunity, by the government of the United States of America about relocating its embassy from Israel to Jerusalem city. In that occasion, the Movement clearly warned that such provoking, unilateral and illegal actions would only increase tensions with potential high-impact consequences. Unfortunately, the Movement member States were right. Last April, tensions increased in Gaza after the participation of hundreds of Palestinians in the “Great March of Return” – a peaceful civil protest against the illegal occupation, the oppression and the half-century dispossession of the Palestinian people by Israel – resulting in several deaths and injuries. Now, the most recent violence event on the Occupied Palestinian Territory, particularly on the Gaza-Israel border, took place amidst a volatile context marked by tensions due to the unilateral and provoking relocation of the United States of America Embassy from Israel to Jerusalem city, on may 14th, 2018, in violation of the provisions established by the corresponding resolutions adopted by the Security Council whereof the USA is also a permanent member. During the last hours, peaceful protests have left the regrettable result of at least 58 casualties, including children and more than 200 injured. Such massacre is the result of repression by the occupying power security forces against Palestinian civilians. In this regard, it is necessary to conduct an independent and transparent research; otherwise, this action will only encourage Israel to implement policies and practices aimed at consolidating its control and the illegal de facto annexation of the city. In this sense, we say that the current situation is unsustainable. Tragic events on the Occupied Palestinian Territory, including East Jerusalem, are proof of the need to increase efforts by the international community to find a fair, long-lasting and peaceful solution to the Palestinian cause in every aspect and in conformity with the international right. It is necessary to preserve and find a two-State solution considering the borders existing before 1967, in the framework of respect towards the long-standing reference terms supported by the international community, and in conformity with the corresponding UN resolutions, the Principles of Madrid – including the Peace Principle for Territory – the Arab Peace Initiative and the Quartet’s Road Map. Mr. President, Before finishing, let me reaffirm five (5) elements and highlight, once again, that only a peaceful and integral solution to the Palestinian cause will lead us to reach the so much desired peace in the East region. This week marks the 70th anniversary of the tragic Nakba for the Palestinian People in 1948. In this light, the Non-Aligned Movement reaffirms its permanent solidarity with the heroic Palestinian people and the unwavering support to their fair cause, in their legitimate struggle for justice, dignity, peace and the exercise of their inalienable rights, including their right to self-determination and freedom in the independent Palestinian State, with East Jerusalem as its capital and the achievement of a fair solution to the suffering by Palestinian refugees, based on the 194 resolution (III). We shall bring the tragedy and the prolonged suffering by the Palestinian people to an end, without further ado. Also, the Non-Aligned Movement reiterates its profound concern due to the lack of accountability on the violations by Israel, since it promotes impunity and, more so, destabilizes the situation on the ground, diminishing the peace perspectives. In this light, the Movement calls for an international action, particularly by the Security Council to guarantee the accountability to stop violations perpetrated by the occupying power. Israel shall comply with its obligations and responsibilities by virtue of the international right. Also, the international community shall guarantee the protection of Palestinian civilians in Gaza and the Occupied Palestinian Territory, including East Jerusalem to face the serious insecurity situation of the occupied population and avoid the loss of more innocent human lives. The Non-Aligned Movement reaffirms the validity of all the corresponding resolutions adopted by the Security Council regarding the Palestinian cause, including the Statute of Jerusalem, which are legally binding for the UN Member States; thus, they shall be completely and effectively implemented. It is necessary to respect UN resolutions particularly 476 (1980), 478 (1980) and 2334 (2016) to calm and rectify the current situation and improve the perspectives of peace. Also, the Security Council shall comply with its established obligations by virtue of the Chart and shall, consequently, act to defend its own resolutions and maintain its credibility. In consequence, the Non-Aligned Movement reaffirms that Jerusalem is a final status issue in the peace process in the Middle East. Thus, we urge the diplomatic representations to withdraw from the Holy City, in conformity with the provisions by resolution 478 (1980) of the Security Council and, more recently, by resolution ES-10/19 of the General Assembly, adopted last December 21st, 2017 by most of members. Finally, the Non-Aligned Movement reiterates its call to the government of the United States of America to revert its decision on December 6th, 2017 and the relocation of its embassy in Israel, last May 14th 2018, as well as to act in conformity with the UN corresponding resolutions in order to save the perspectives of a fair solution and guarantee a future of peace, security, prosperity and dignity for both the Palestinian people and Israel people. Thank you very much, Mr. President.
Buscar