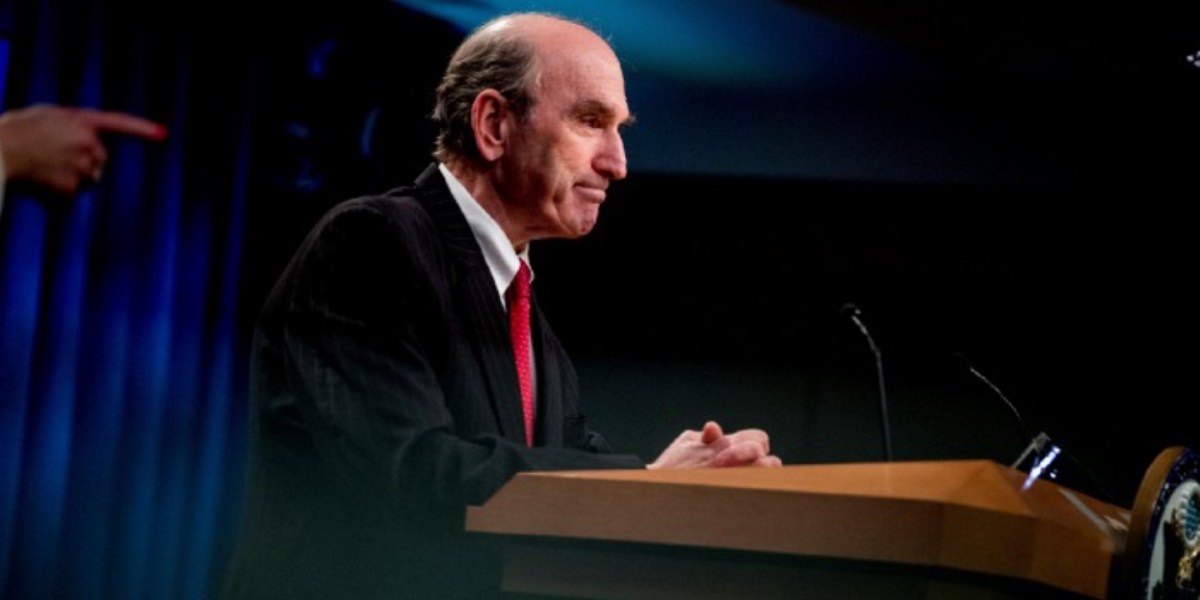 In the Spanish-speaking world, there is a very peculiar children’s song: “Let’s Tell Lies”. Through the hilarious repetition of verses and a catchy melody, there is a succession of absurd situations that delight children. Comedy is an exercise where reality is alienated so that laughter is achieved. The song made us remember what took place in recent days in the United States Senate, during a hearing of the ineffable Elliott Abrams -who despite greatly resembling a known villain of a children’s program who unsuccessfully chases blue pixies, continues to be Donald Trump’s macabre political operator. That country’s Senate asked Abrams for explanations in face of the inefficiency of this erratic strategy to achieve a change of government in Venezuela. The performance they carried out in the Senate goes beyond the limits of comedy in order to play the role of a tragedy of enormous dimensions.

It is a two-fold tragedy: on one side, because of the sad role of Mr. Abrams, with his eagle-like features, confronted by the accumulated defeats against Nicolas Maduro and the resistance of the Venezuelan people, stammering unintelligible excuses, making up magic words in an attempt to divert attention and guarantee the endeavor’s success. However, what is most worrisome is the tragedy that we see as all of the actors in this parliamentary performance are disconnected from reality. In order to make coherent and assertive decisions, one of the fundamental values in politics is to start from truthful premises of the situations that make up the political game, the actors, the ideological reality, concrete reality. Hollywood has made the world believe that the dominant elite in Washington has all the means to rely on truthful information on whatever issue you can imagine. Reality is quite different. Each of the Senators’ interventions questioning Elliott, with his disjointed smile, resounded like that children’s song, absurdity after absurdity, lie after lie, trying to draw the complex reality of the Latin American continent.

Kentucky Senator Rand Paul, surrendering any contempt for ridicule, displayed his ideological ignorance by questioning poor Elliott – who gazed in disbelief, always in defeat, not knowing quite what to reply – on the concern about substituting President Nicolas Maduro’s socialist government with another by Guaido who, in his view, “is also a socialist and his party is recognized by the Socialist International.” Unbelievable! He is convinced that the puppet created by the Trump Administration to plunder Venezuelan wealth whose only personal accomplishment will be obtaining a few crumbs and the scorn of the Venezuelan people; he who attempted to carry out a coup d’état and only managed to stain his shirt with green plantains; a firm enthusiast of empires, specially the North American one; that character, for Senator Paul, is a socialist. He would need to start by reading a bit about the real ideals of a philosophy that places the human being at its center, rescues people’s dignity, doesn’t sell out to the highest bidder, recognizes people’s work and distributes resources equitably to achieve a dignified and gratifying life. It would be to his advantage to study a bit of history about Latin American popular struggles, the blood shed by the coca farmers in Cochabamba, the suffering of the Mother of Plaza de Mayo who still recall the ghosts of military indignity, the sacrifice of Chilean miners against the capitalist maelstrom of copper. Socialism, paraphrasing Che Guevara, is carried in one’s heart to die for it, not in one’s mouth to profit from it. This Senator is ideologically lost in space.

But the nonsense doesn’t end there. New Hampshire Senator, Jeanne Shaheen, invoking the spirits of McCarthyism, complains to a beaten Elliott so that he promotes sanctions on Turkish companies carrying food to Venezuela. It is not enough with the suffering already felt by Venezuelans while confronting the blockade and the huge difficulties to acquire that which people need, Senator Shaheen also pretends that businessmen form other countries are also relentlessly persecuted for supplying food to Venezuela. The Senator attempts against the most fundamental principle of humanity, but also against a value that her own capitalist spirit defends without looking back: free trade. In this case, she finally requested that Abrams deliver to her a list of Turkish businesses that would be subject to sanctions by Trump and his thieves; for her, people don’t have the right to procure the possibility of food provisions, and the so-called free trade should always be limited to the approval of the United States and its capricious way of conceiving the world.

Finally, Senator Tim Kaine – who according to his Twitter profile – plays the harmonica in his spare time, ends the string of nonsense contained in this concatenation of errors from the U.S. elite. In a tragicomic sentence of the world turned upside down, this brainy representative from the state of Virginia, indicates that Colombia must be contrasted with Venezuela as an example of a good democratic government. Nothing more and nothing less than the country which exports drugs and violence to all the latitudes of the continent – specially to the United Sates which is the main consumer of Colombian drugs -, where the State is involved in, to say the least, in the dubious annihilation actions against its own population in the hands of irregular groups promoted by the government party itself. The country where the disappearance and murder of journalists and activists is so common that it has been normalized as a constant by public and published opinion. Colombia, where paramilitary groups are created and trained to invade the sovereignty of neighbors. Colombia, the country whose reality pains all the peoples of Our America. To pretend to present Colombia as a role model can be labeled as the most insane ogre summoned by these Senators without thinking about what they are saying.

We acknowledge there was a notable exception among the Senators. The intervention of Democratic Senator Chris Murphy rendered a questioned Gargamel speechless. This Senator shamelessly exposed how his government has been behind every destabilization operation and action in Venezuela in recent years, all of them, by the way, in violation of Public International Law and of the Constitution of the Bolivarian Republic of Venezuela. Using the first-person plural, Senator Murphy was the discordant note of the evening. He didn’t concentrate in lying or repeating ideologized narratives. He tried to prove how his government has unsuccessfully attempted to overthrow the Venezuelan government and labeled the strategy employed until now as failed. From his arrogant mouth, only truths came out about a policy built on false premises, disconnected from Venezuelan reality and destined to fail from the first day.

From Venezuela we could laugh in front of such an out of key song of lies and nonsense of this new aggression from the U.S. Senate against our sovereignty. No matter how much it resembles a humorous script, it comes short of it the moment in which they express it with proud seriousness, inside the greatest halls of a State that acts as the clearest political expression of world imperialism. The utter failure of the maximum pressure campaign against Venezuela is totally incomprehensible. They know nothing about Venezuela, and even less about Chavismo and its historic, political and social role. Their sources are fictitious, the information upon which decisions are made is not even inaccurate, it is false, absurd, and ideologized to the fullest. The Trump Administration has extended its Miami-oriented and Manichean script, its intemperate spiel and its irreflexive aggression, to large part of the extremities of his country’s political body. But our conviction, with the truth and dignity, remains unwavering. President Nicolas Maduro obtains new victories everyday against the offensive of the Trump Administration and the cataclysmic vocation of that caricature called Elliott Abrams. They haven’t succeeded against Venezuela and they won’t be able to. The Venezuelan people not only resist but advances as well. It is unstoppable. It knows not about surrender. It knows how to struggle and win.