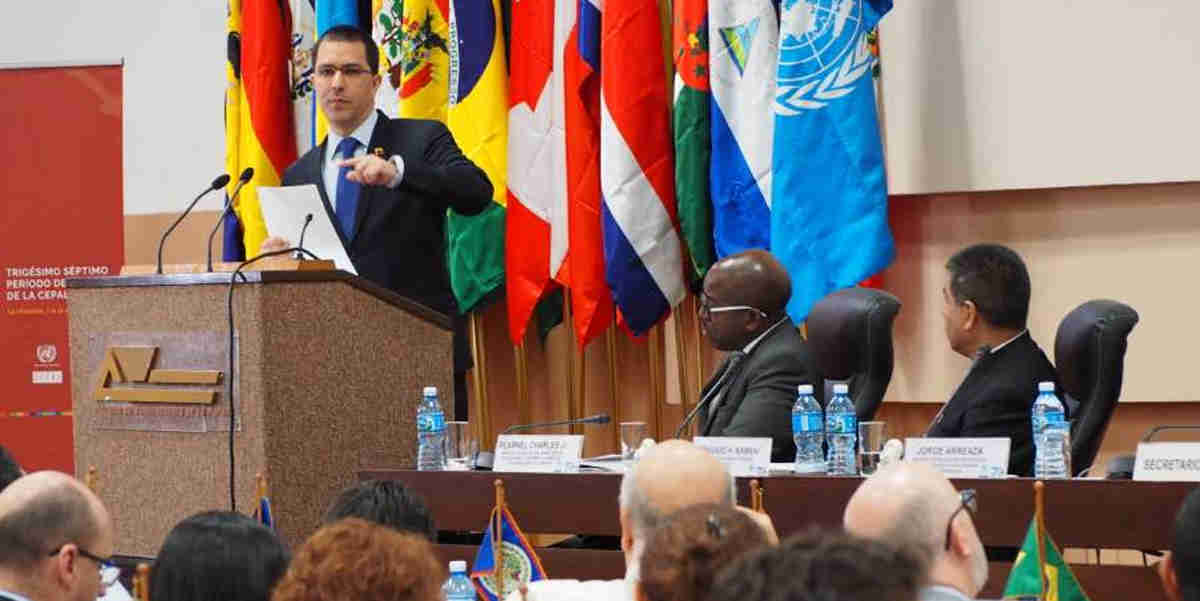 “The global and regional challenges of multilateralism, the role of ECLAC and the 2030 Agenda for Sustainable Development”

Please allow me to begin my speech by conveying the affectionate, sincere and Latin American greeting from the Constitutional President of the Bolivarian Republic of Venezuela, Nicolas Maduro Moros, who also conveys a warm congratulation to ECLAC for its 70 years, to the Executive Secretary, Alicia Barcena, and her working teams. How many ideas and contributions; how many processes has ECLAC produced in these 7 decades. How much will and willingness I see in the search of paths towards equality starting from solidarity and productive activation of our economies.

How many contributions represented those imports substitution programs promoted in the 80’s. How many trials, successes, as well as errors and lessons learned?

I would like to start by saying that today we are celebrating in Venezuela, as mentioned -in his intervention- our brother Bolivia’s Foreign Minister Fernando. Allow me to share with you a story about equality: In 1999, a German artist went to Gran Sabana in Venezuela, and decided unilaterally to take, steal a beautiful pink stone and that is a sacred stone of our indigenous Pemon people.

When the grandmothers of the Pemon people from Mapuri community, in the area of ​​San Francisco de Yuruani – Bolivar state, went to pay homage to the Grandparents couple, Grandmother Kueka was missing –a stone of 30 tons had been taken without authorization of the indigenous peoples. As from that same day a struggle began: The struggle of our indigenous peoples.

A Deity of the Pemon people had condemned Grandfather Kueka and Grandmother Kueka to live together forever because they had violated the laws: They could not get marry because they came from different communities which had a feud. Today, this morning, Pemon grandmothers arrived in Berlin and at this very moment they must be performing the first ritual of healing in that park, in order to be able to begin the process of repatriation of that sacred being for our Pemon people.

We are, therefore, happy, that is why we also thank the Executive Secretary Alicia Barcena, the Deputy Secretary General of the United Nations and our friends foreign ministers, for sharing this beautiful opportunity.

The international circumstances and the unbridled voracity of the great power concentrators and, consequently, generators of inequality, mean that today, as never before, we have the human obligation to defend multilateralism and the parameters that the international community has given to open avenues and paths to a world of peace, prosperity, work and knowledge.

Violations of multilateral methods are more frequent every day, and the most elementary rules of the game are ignored. This situation puts peace, security, human development and even life on the planet at risk. We cannot turn multilateral forums into spaces for the subordination and adoration of governments that intend to impose unilateralism as a norm, no longer as an exception -if there is room for exceptions-.

In this regard, we express our concern for the submissive, paralyzing and fractionating effect that the unilateral whims of the imperialism have produced in several of the integration mechanisms of Our America. Despite the differences that may exist and assuming the challenge that diversity implies, these are times for unity, to close ranks with sovereignty, right to peace, development and equality of our peoples.

Each wall, each alleged sanction, each supremacist, racist, warmongering and discriminatory action of the U.S. government or any other government that acts like that, must be fuel for the union and the joint construction of our own regional social and economic development strategies.

We cannot allow that in these 70 years of ECLAC, after the great advances that took place in the first decade of this century, our region continues in stagnation and in danger of not progressing as a bloc.

Hence, we insist on unity within the diversity. We insist on continue promoting multi-polarity through multilateralism based on equality among States, so as to confront and overcome poverty, deep inequalities, and at the same time, we join actions in the region to repudiate the imposition of extraterritorial unilateral coercive measures, and to continue rejecting economic, financial and commercial blockades –that are totally anachronistic and violate the International Law.

Honorable delegates, special guests and observers present, allow me to quote the words of Mrs. Alicia Barcena in the foreword of the document submitted in this session, entitled “Inefficiency of Inequality”, where she states: “… the social gaps and lags have a negative impact on productivity, taxation, environmental sustainability and the greater or lesser spreading of the knowledge society. In other words, inequality is inefficient; it is an obstacle for growth, development and sustainability.”

Venezuela firmly adds to this quote that inequality; poverty and exclusions of our peoples are not fortuitously generated. Inequality comes from nothing. Inequality is the product of colonialism and neocolonialism.

Yesterday in Caracas, we held a meeting with the presence of delegations from Africa, Latin America and the Caribbean on the Reparations for the African descent peoples and we were able to assess through the interventions -I especially remember a very clear one made by the Ambassador of Gambia to the United Nations- but also the speech of Comrade Ralph Goncalves, Prime Minister of Saint Vincent and the Grenadines. How colonialist slavery has structural effects that exist to date, not only culturally but also structurally, in the economies of the countries that were subjected to slavery as well as in the countries to where the enslaved people were taken.

“Only the people save the people”, Commander Hugo Chavez constantly repeated to us. Hence, let us open the paths and give the resources and tools of the government to the organized peoples, so that they will be the ones who build their own paths towards equality, productivity and happiness.

In the last 19 years, the Bolivarian Revolution has endeavored to trust in the People. Yesterday, President Maduro was allocating to families from Nueva Esparta state the house number 2,854,000 under the Grand Mission for Affordable Housing. We may say: Today, over two millions families -over ten millions of compatriots- have a worthy own house. Most of these houses were built by the People’s Power with the support of the Revolutionary Government and thanks to the redistribution of the wealth mainly generated by the oil rent.

As it happens with housing, we also have achieved to fully cover our elders’ right to pension, in spite of the merciless continued aggression against our country, represented by financial blockades, imperialist threats of use of the force and political strategies aimed at isolating us. There are over three million of grandparents receiving their pensions. From the 100% of pensions granted, only 30% are contributive and the remaining 70% derive from social justice and are paid for the Bolivarian Government.

We have developed a strong social protection system through our Missions and Grand Missions. We have made this system efficient by employing technology. Today, Venezuela –thanks to the Homeland Card initiative– has a rigorous registry of the subsidies and social policies, and access to missions as well.

Today, at least one of two Venezuelans use the technology tools, virtual wallets and online registrations in order to receive benefits and co-responsibly participate in guaranteeing their social rights and of their families.

74% of the National Budget is destined to social investment. The right to free education at all levels remains and even it is broadened. The right to primary medical assistance is guaranteed. We should thank to the Cuban Revolution for its kindly contribution in the healthcare for our people, especially during the first years of our revolution, and for the training of over 35 thousand community comprehensive medical doctors, being 10 thousand of them specialized in comprehensive general medicine, so far.

Cuba’s contribution to our missions and grand missions system are invaluable and the ALBA contributions as well. Thanks to Cuba; thanks to Fidel; Raul; the President Diaz-Canel; and thanks to every missioner, collaborator, and every Marti-Bolivarian people who has taught us to be not just a little bit better person but a much better and specially, much less selfish person.

Three weeks ago, we reached the figure of one million children taking part in the Children and Youth Choirs and Orchestras System, a work built by Maestro Jose Antonio Abreu, a great man who demonstrated for over 40 years that music is inclusive and contributes to overcome poverty. One million souls that set themselves free and grow based on culture, music and the noblest sentiments of humanity.

Dear comrades, everything what I have told and described to you, have been achieved precisely due to the highest value granted to equality by the Bolivarian Revolution.

The Bolivarian Republic of Venezuela considers -before the characteristics of oppressive and naturally unequal of the economic system imposed globally- that the United Nations 2030 Agenda and its Sustainable Development Goals represent a necessary and imperative proposal. In the event that the majority of the countries could achieve these goals, we will be in the presence of a true, fair and unquestionable world’s social and economic revolution.

Therefore, the Homeland Plan draft presented to our country by the President Nicolas Maduro –intended to be implemented during the next six-year-term and which will be submitted to the people during the next elections on May 20th, for its endorsement– has been intentionally and transversally impregnated by the 30 Sustainable Development Goals and fueled with the wise contributions of millions of citizens by employing an original methodology of consultation to communities and organized groups from the people grassroots.

Just as Venezuela believes in multilateralism, we also firmly trust in South-South cooperation as a fundamental basis of collective action towards equality. We have demonstrated it through the initiatives developed by the Bolivarian Alliance for the Peoples of Our America – Peoples’ Trade Treaty (ALBA-TCP), as well as with the promotion and expansion of PETROCARIBE.

It is unquestionable the wellbeing provided by those two mechanisms in the region. Therefore, we seize this opportunity to reiterate our conviction that only by means of cooperation and harmonization of common strategies of the Southern peoples, we will be able to substantially overcome all those barriers and restrictions that prevent us to freely access to development.

ECLAC continues to be essential for our region. It has demonstrated its significance during these 70 years through thousand of concrete proposals and publications; technical cooperation projects; and diagnoses, analyses and support to its members. Every mandate given to ECLAC by the States have been undertaken with passion, which allows us to keep our trust in this organization, hence it can continue contributing to the overcoming of economic and social challenges in order to achieve prosperity and the living well of our peoples.

During its different stages and times, ECLAC has demonstrated that it has always committed to study our societies and economies in order to –quoting the Liberator Simon Bolivar– activate the two essential levers: Work and knowledge; and following the Liberator’s phrase: Thus achieving the challenge of making the men and women honest and happy.

Once more, we convey our congratulations to our ECLAC, to its Executive Secretary Alicia Barcena and her working teams.

Lastly, in spite of our current global geopolitical environment -and particularly our regional one- everyone present here today must remember that Latin America and the Caribbean continues to be the Region of Hope, the ZONE OF PEACE.

Thank you very much! United, we shall always prevail!