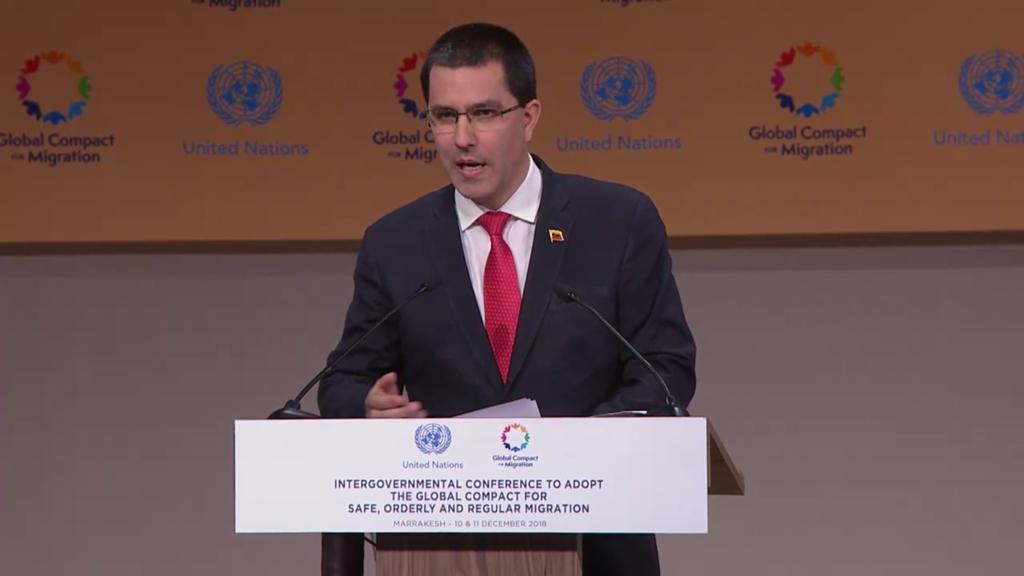 Speech by the Foreign Minister Jorge Arreaza at the Intergovernmental Conference to Adopt the Global Deal on Safe, Orderly and Regular Migration

Firstly, I wish to thank His Majesty Mohamed VI, the Kingdom of Morocco, and the Minister of Foreign Affairs Nasser Bourita, for extending us the invitation to attend this Conference of the Global Deal on Safe, Orderly and Regular Migration.

The Deal, which is the reason of our meeting today -although it is not perfect and we still have a long way to go-, represents a minimum basis and a common roadmap to guide cooperation and dialogue among States and within the society as well. It promotes comprehensive public policies from the Public International Law and respect for migrants’ human rights viewpoint.

Human mobility has been part of us, from the origin of civilizations. Many of our societies are the result of migrations. The cultural diversity from migrations has been constituent element of many national and regional identities. It is a human right and we must protect and guarantee it as such.

Today, we are more, many more and, it is easier to travel. In addition, the international, economic, financial and speculative system imposed in the international system is increasingly generating higher inequality. Add to that the unilateral economic aggressions, which impact on migrations. So, we must conclude that this Deal represents an opportune, pertinent and necessary initiative.

Venezuela recognizes the positive contributions of this Global Deal, which is based on cooperation on migration. However, we must alert that its implementation should be made in strict compliance with the United Nations purposes and principles, so we urge to prevent any attempt aimed at turning it into an intervention mechanism that may be invoked by some States. We should not accept any manipulation or selective interpretation of its objectives, much less relaxing their postulates in order to seek support from those countries that today reject the Deal and withdraw from this fair initiative. This is the first major multilateral effort to prioritize migrants based on their dignity, in order to recognize them as subject of law, as developing agents, and defend such guarantees against any trend aimed at dishonour their contributions to the essence.

Migration is a multifaceted and complex phenomenon, which has benefitted development of our societies, therefore we categorically condemn that some political and economic sectors intend to use the migrants present in their countries as a pretext for refusing the challenges they must face in specific fields of their internal politics. Racism and xenophobia are promoted, as well as criminalization of migration, all this increasingly infringe the most basic migrants human rights. Internal problems are not addressed; instead, other States are judged and the migratory issue is conveniently manipulated.

For example, regrettably, some States decided not to join this significant effort in favour of humanity arguing that it restricts the freedom of speech enshrined in their constitutions, with the perverse purpose of continuing promoting xenophobia, racism, hatred, discrimination and intolerance against migrants. This supremacist and social class-based approach takes us back to the saddest past events that we believed overcome.

We cannot accept the imposition of migration-as-a-security-issue vision. The true crime is criminalizing migrants -no pun intended- and this Deal and the action plans -which we voluntarily agree and coordinate here- must neutralize this reality.

There are no illegal human beings, as President of Bolivia Evo Morales said. This idea is inhuman and contrary to International Law. It is impossible to claim to be an example of promotion and protection of Human Rights in the world when the dignity of thousand migrants is infringed every day; when they are threatened with the use of lethal force; when they are left on their own; also, when ships transporting migrants in the Mediterranean Sea are attacked or their access to port is denied until provoking their death. These are just a few examples.

Are not the central countries -which today attracts significant migratory flows- direct responsible for colonization processes and, currently under way, plunderer neo-colonization processes? These processes have unstructured and dismantled the institutions and stability in African and Latin American countries, that is, they invade us, take away our natural resources and, in several cases, impose their culture and religion; thus subjecting us to poverty and exclusion. However, they criminalize and prevent our migration by all possible means.

Justifying through national regulations the imprisonment of children in cages and separation from their parents whilst intending to question the universally recognized principle of paramount consideration of the best interest of the child by using legal subterfuges, is an opprobrious affront to international community.

It is striking that those countries that promote intervention in different parts of the world have made respect for national sovereignty a point of honor to negotiate this instrument. It is precisely these countries that sully the national sovereignty of sovereign States with interventions, promotion of war, extraterritorially applying their laws and economic blockades to coerce and distort the will of free peoples, promoting warmongering agendas and attempting to force convenient changes of governments, also promoting migration. This is a dilemma that multilateralism must deal with, firmly and decisively.

Venezuela has been a country that has historically welcomed immigrants from all over the world, including countries in Europe, Asia and the Middle East, and especially in our region, neighboring countries, brothers. Millions of Migrants have settled and developed a prosperous life in Venezuela, especially in the last decades. They were never victims of xenophobia or discrimination. Instead, they have enriched our culture, society, and economy, and today and always will continue to be welcomed and guaranteed their social rights. A notable example is the regularization process implemented during the governments of Presidents Hugo Chávez and President Nicolás Maduro, granting Venezuelan nationality to more than five million Colombian brothers and sisters and one million people of other nationalities of origin.

As a result of the unilateral coercive measures currently applied by the United States and other countries against the economy and other fields of my country life and an international campaign of destabilization to overthrow the Government of President Nicolás Maduro through unconstitutional means, an atypical mobilization of Venezuelan nationals particularly to neighboring countries – which far from constituting a humanitarian crisis as some countries interested in promoting an intervention agenda intend to show – represents another chapter of the battle of an aggrieved people. Some governments and multilateral organizations are celebrating, exaggerating numbers, in an unusual scramble for resources to serve Venezuelan migrants. In almost all cases, the number of nationals of those countries who live in Venezuela is three or five times higher than the number of Venezuelans they claim to have recently received. For example, in Venezuela there are 5 million Colombians and we will never use them to request resources from the international system. However, Colombian Foreign Minister comes here and to every forum to speak about the Venezuelan case with the purpose of seeking resources for Colombia.

Finally, I would like to reaffirm as a Venezuelan the commitment of my unbreakable country with the principles of multilateralism, with the spirit of this Marrakesh Deal so transcendent and made available to the United Nations and all States, to always act in the concrete reality and jointly guarantee respect for the rights of migrants, through cooperation. In Marrakech we have made history to guarantee a better present and a dignified and fair future for migrants throughout the world.

Congratulations to all the countries that have joined this initiative. Thank you.