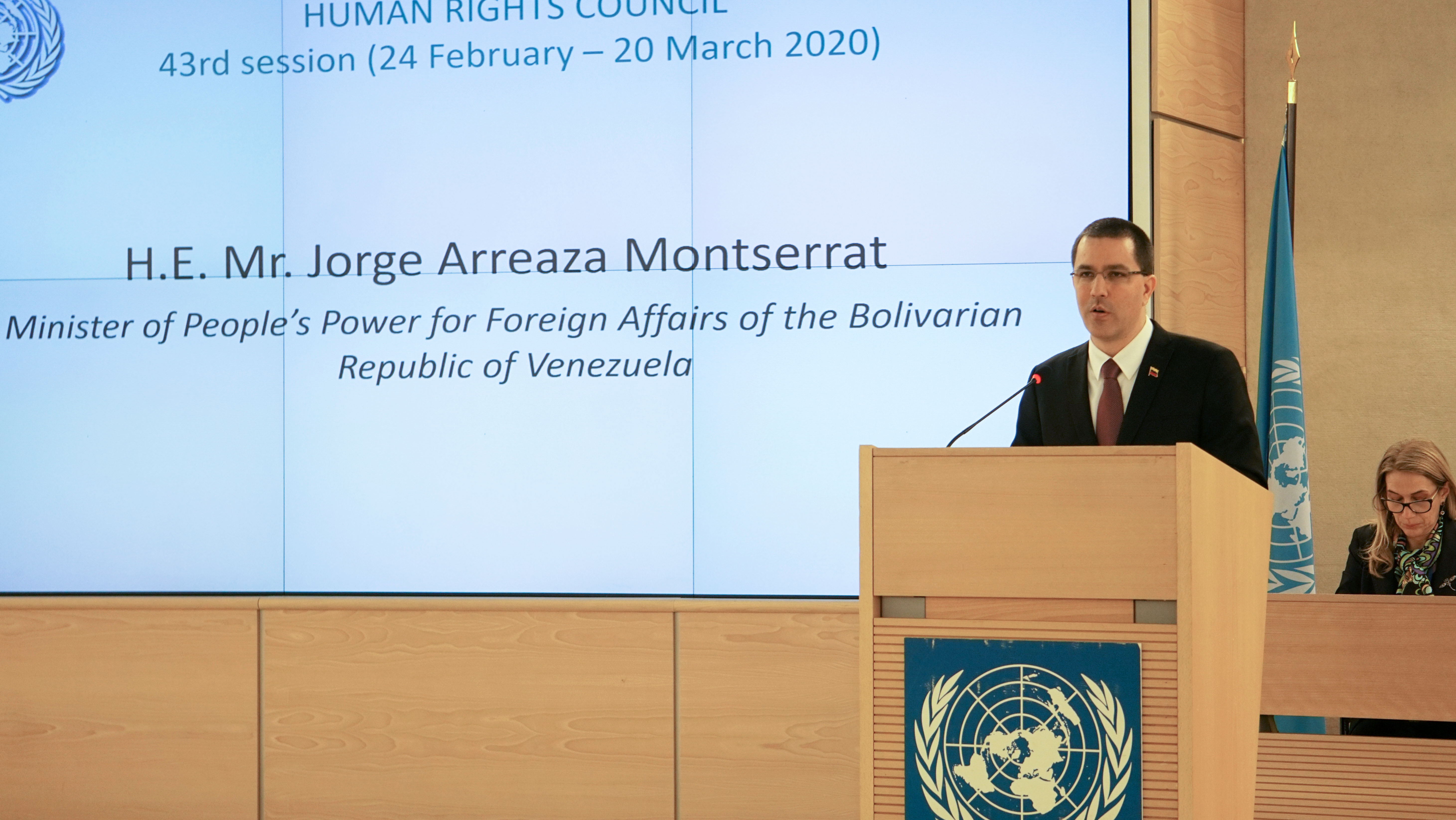 From January this year, Venezuela has rejoined this United Nations Human Rights Council for the third time.

Our election, which should have been a routine procedure within the multilateral logic, was nevertheless turned into a real global battle. The ideological extremism that has taken over the White House sought to deprive Venezuela of its right to join this Council, activating unusual and unprecedented mechanisms of pressure, blackmail and even extortion to member States, both in their capital cities and in these multilateral forums. For this strategy, it also used a group of countries in the region as obedient and subordinate messengers.

On behalf of the Venezuelan people, we thank all the States that supported the Government of the Bolivarian Republic of Venezuela, under such particular circumstances. We won, only together, it was possible. Neither international bullying, nor threats, nor extortion, could subvert the sovereign will of most States of the world. Just as these arbitrary imperialist forces and methods have failed to bend the sovereign will of the Venezuelan people, subjected to the most grotesque intervention and aggression throughout 2019.

Venezuela’s action in the Council will be aimed at promoting respect for human rights and fundamental freedoms for all, without distinction of any kind and in a fair and equitable manner. We will strongly support initiatives to fight against racial discrimination, xenophobia and related intolerance.
We will continue to defend the principles of universality, impartiality, objectivity and non-selectivity, constructive international dialogue and cooperation, to encourage the promotion and protection of rights, including the right to development.

We must save this valuable collective project, this Council, in face of the stubborn and biased claims of some countries to selectively use the procedures of the Council to politically attack some of its members.

Venezuela considers that those governments imposing, supporting or facilitating the implementation of unilateral coercive measures must not be part of this Council. These measures have been repeatedly condemned by the United Nations General Assembly, which considers them to be contrary to international law and the international humanitarian law, the Charter of the United Nations and to the basic standards and principles governing civilized relations between States.

This Council has repeatedly condemned the coercive measures in form of economic sanctions and has expressed alarm at the disproportionate and indiscriminate human costs of these measures and their negative effects on the entire population, but especially on women and children, the most vulnerable sectors.

Despite all these statements, the government of the United States and other governments that decided to support them continue to implement unilateral coercive measures under ideological criteria, with the intention of forcing other States to renounce the exercise of their sovereign rights. They intend to impose their political and economic model, with strategies of forced regime change using these perverse measures, entirely apart from the international law, as a tool to make use of the natural resources of the countries concerned.

Hindering access to food and medicine as weapons for political coercion, depriving entire peoples of their own means of subsistence and development, is clearly a criminal action. The unilateral coercive measures are equal to weapons of mass destruction, hence we denounce this since we suffer it in Venezuela.

This is a masked form of warfare. Tanks, aircrafts, bombs and missiles are replaced by financial blockades and limitations on national production and international trade. The United States Department of the Treasury is today the economic Pentagon that commands this economic war against hundreds of millions of human beings, in the face of the inaction of the multilateral system.

Since 2014, more than 300 unilateral measures have been adopted by the United States to affect the economic performance and undermine the human rights of the Venezuelan people.

Since 2015, Venezuela has repeatedly denounced in this Council this economic aggression and its humanitarian consequences. In order to retain the immense harm that the unilateral coercive measures are making to the people of Venezuela, President Nicolas Maduro has requested the collaboration of the United Nations system to generate a policy to end the blockade, using Venezuela’s oil. However, the United Nations has done little or nothing about this. Meanwhile, the so-called United States sanctions are being multiplied almost daily, aimed at affecting production, blocking all the channels for the commercialization of oil and other Venezuelan goods, generating economic and humanitarian consequences, which is the worst thing, for the entire Venezuelan population. Yesterday, Mr. Elliott Abrams, special delegate of the United States to Venezuela, announced that they are going to chase vessels transporting Venezuelan oil, vessels transferring oil offshore; they are going to chase them and they are going to sanction each one of those companies, one by one.

The United Nations, and particularly, this Council, must defend the right of the Venezuelan people, like the Iranian people, or the Cuban people, or the Korean people, or various African peoples, the South, in short, to have their own resources to meet their social needs, with the political system that they sovereignly choose.

The coercive measures of the United States have resulted in an abrupt decrease in oil income of Venezuela, which has fallen by 90% from about 42 billion dollars in 2013 to 4 billion dollars in 2018. These actions of economic terrorism have generated losses to the country, which already exceed the 120 billion dollars. In addition to this, the valuable assets of the Republic have been plundered and the resources of the Venezuelans abroad have been blocked.

The coercive measures unleash severe social wounds to the population of Venezuela, negatively affecting the entire range of human rights. In turn, they have fostered a migratory phenomenon that is both induced and unprecedented.

The Bolivarian Government has made great efforts to strengthen all its capacities in the area of social protection. We have managed to prevent a famine in Venezuela and, at least, a quadrupling of the effects that would have happened without this socialist shield, without these social containment measures.

This is undoubtedly, a systematic and widespread attack against the Venezuelan civilian population, executed by the United States authorities with clear intent and knowledge of the effects caused and to be caused. In fact, the social and humanitarian aftermaths, are actually well-planned goals aimed to meet the illegal political and economic objectives proposed from Washington. There are no conjectures, as the authors and executors of this destruction tragedy have confessed: Trump, Pence, Pompeo, Bolton and Rubio, all have openly confessed it. A few days ago, a spokesman of the Department of the State said that they were still exerting 50%, 60% pressure on Venezuela, in other words, they have a 50% more hatred and aggression reserved against our country, against our people, and the international community says nothing, does nothing about it. Were the unilateral coercive measures mentioned yesterday among the threats to Human Rights by the Secretary General, Antonio Guterres? We know that they were not mentioned. Hiding or ignoring them is an attack to the millions of innocent human beings who suffer their effects in the face of absolute impunity.

Jeffrey Sachs and Mark Weisbrot, American academic economists conclude their report on the Venezuelan economy for the years 2017 and 2018 by stating: the US sanctions represent a death sentence for thousands of Venezuelans per year. The High Commissioner Michelle Bachelet herself in her reports has recognized this, as well as the special rapporteur for unilateral coercive measures of this Council has recognized it; this has also been denounced in 2017 by the special rapporteur for the fair and equitable international order, Alfred de Zayas, who was in Venezuela and saw the reality.

On February 13, Venezuela – as State Party to the Rome Statute – went to the Prosecutor of the International Criminal Court to request an investigation for crimes against humanity committed by the authorities of the United States, who are responsible for this form of economic terrorism through the unilateral coercive measures; an international criminal investigation to ensure prosecution and accountability of the authorities of the United States who have caused suffering to the people of the Bolivarian Republic of Venezuela.

Venezuela goes to the International Criminal Court to vindicate international law and the validity of multilateral institutions in search of justice. In Venezuela, as in other countries subject to unilateral coercive measures, sanctions have been proven to kill; sanctions are a crime against humanity. This will be demonstrated with evidence before the International Criminal Court and, despite the arrogance and contempt of the United States towards international law, we are convinced that the time has come to stop the madness of the American plutocracy that attempts against peaceful coexistence, against human rights and against the lives of millions of people throughout the world.

Venezuela and other countries subject to sanctions, unilateral coercive measures, do their part with courage and dignity. However, it is up to the United Nations, the entire multilateral system, and this respectable Council, in particular, to lead this humanitarian, legal, urgent containment, against the massive violation of human rights represented by the so-called sanctions, unilateral coercive measures. Time runs, suffering increases. That no one evades or shirk their responsibility in a humanitarian matter as serious as this.

Paraphrasing the great Rosa Luxemburg, from Venezuela we say to the whole world today: Justice or barbarism.