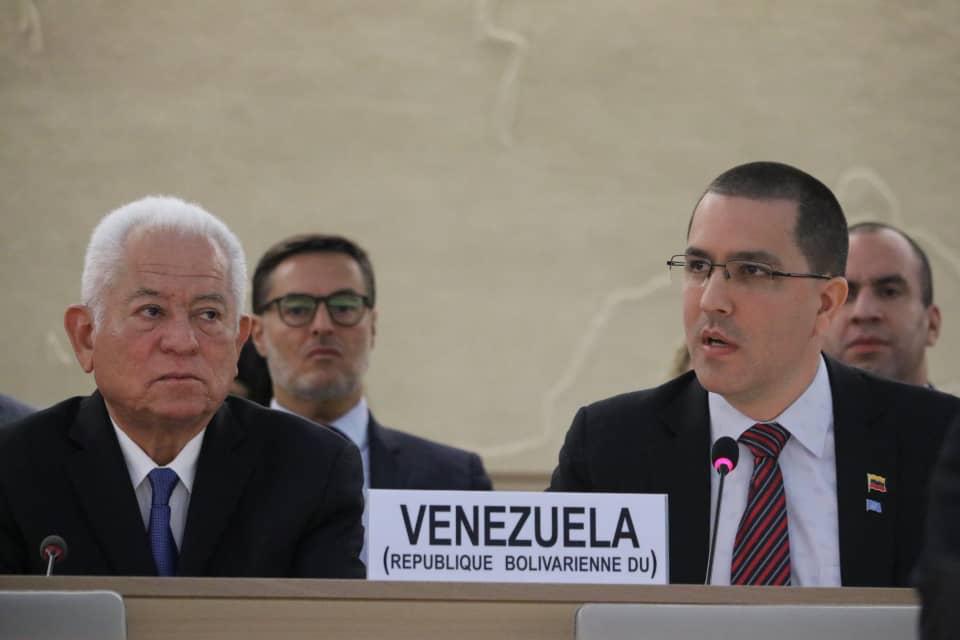 Speech of the Foreign Minister Jorge Arreaza in the 39th Period of sessions of the Human Rights Council on the occasion of the presentation of the former High Commissioner, Zeid Ra’ ad Al Hussein report

Thank you very much, Mr. President, for this opportunity to address the Council.

We are not speaking about Venezuela; we are speaking about Chile. A day like today, forty five years ago, a terrible, fascist, CIA-conducted coup d’état, reversed a beautiful democratic dream; a people’s dream.

Forty five years… Our High Commissioner for Human Rights was one of the many victims of that political, social tragedy in our sister Chile.

However, forty five years after, such phenomena, conducted and directed by the US power, still occur with the purpose of frustrating the dreams of Our America’s Peoples and continuing considering Our America as the “backyard” – that never was and will never be -; but the Peoples keep resisting.

Our generation – I am actually forty five years old – grew up fearing the impossibility of carrying out a People’s democratic project, because our fate would be the same as Chile’s in 1973. However, our Peoples have insisted and will insist in reaching their freedom, independence and equality as the fundamental premise.

Once again, we denounce here the siege against Venezuela, the economical and financial blockade against our country, the unilateral coercive measures by the US government and the European Union seeking at “making scream” our economy as they did in Chile in 1971, 1972, 1973.

They also made it difficult for Venezuela to receive, import and ensure what is fundamental and basic for production and for providing our People with food and health.

Here is one example: right here, Credit Suisse, a Switzerland-based institution, U.S sanctions were imposed on our securities, causing a real loss of their value of 265 million from 2007 until 2018 (we are talking about million dollars).

According to PAHO, Venezuela needs 120 million dollars to guarantee the vaccines for the whole population: antiretroviral drugs, supplies for blood banks, malaria vaccin, TB-vaccin, oncology drugs, medicines against leishmaniasis. It is only one institution, here in Switzerland and more than 265 million losses for Venezuela.

That money belongs to the Venezuelan People and it is blocked to create internal problems.

Also, on August 4, our country witnessed an unknown event that was fortunately unsuccessful: the assassination attempt, not only against President Nicolas Maduro, but also against the entire Political-Military High Command, the Public Powers attending a military event in the center of Caracas, the Venezuelan capital.

Where was this unsuccessful assassination planned? In Miami, USA. Those who took part of this plan were trained in Colombia; they have already confessed and we have enough evidence.

Thus, we shall once again denounce the persecution of our country. Media and political campaigns have been forced. The financial problems have generated an induced migration; a forced migration which is being used to damage Venezuela’s image as well.

The Venezuelan State is ensuring the return of thousands of Venezuelans to their country in a program that President Nicolas Maduro called Repatriation Plan, for they have been subject to labor exploitation, sexual exploitation, human trafficking and all kind of sufferings in some countries they have gone.

We also want to say that we reject the biased reports against Venezuela by the outgoing High Commissioner for Human Rights, Mr. Zeid Ra’ad Al Hussein, who always assumed a personal political position; and that we have full confidence that the new High Commissioner for Human Rights – always respecting her mandate and independence – will be willing to begin a new stage of cooperation, as the Government of the Bolivarian Republic of Venezuela has also expressed, in order to provide all the necessary information in real and relevant time and to fully contribute with the Universal Human Rights System.

The Human Rights Council and the High Commissioner shall enjoy the full collaboration of the Government of the Bolivarian Republic of Venezuela and President Nicolas Maduro.

We turn the page on the last four years and what we experienced with the outgoing High Commissioner.

Yesterday, we had the opportunity to share our thoughts on the independent expert Alfred de Zayas, who visited Venezuela in November and December last year, and who emphasized the reality: the blockade, the sanctions and the harassment against Venezuela.

Our country has a full social protection system which has managed not only to overcome the economic hardship but also to strengthen itself over these years of economic warfare.

Despite such hardship, in Venezuela, the healthcare system is free for everyone, without distinction and counts on doctors trained in Revolution who are always standing alongside the Venezuelan People.

Education is free for everyone, from pre-Kindergarten through university.

Regarding the housing system, we have provided more than 2 million houses in the past 4 years.

More than a third of Venezuelans, 10 to 11 million, are currently studying in the country.

Over the last 20 years, 75% of the national income has been allocated to social investment.

The unemployment rate is below 6%.

Regarding the food system, despite the hardships arising from the crisis, we have managed to ensure food supply for more than 6 million homes in Venezuela, through a program called Local Committees for Supply and Production (CLAP, for its Spanish acronym).

We are making a great effort.

Lastly, I would also like to share that – despite the sanctions, the warfare, the threats against our President’s life, the meetings held between US Government high officials and Venezuelan militaries to generate a coup d’état in our country, as unveiled two or three days ago by the New York Times, the Washington Post and the Spanish ABC; despite the attempted assassination against the President and the blockade against Venezuela – President Nicolas Maduro has launched an Economic Recovery Plan for growth and prosperity which has broken paradigms regarding the traditional economy and anchorage of the Venezuelan economy to the old institutions of the international financial system.

We view with hope Venezuela’s democratic future; a democracy that continues to deepen day by day, based on the efforts of a People in Revolution.

We know that we shall manage to prevail and that events such as that terrible and violent coup that took place forty five years ago, on a day like today – the bombing to La Moneda house which killed Comrade-President Allende –, the end of a dream, the end of a hope in Chile, shall never happen again.

Thank you very much…