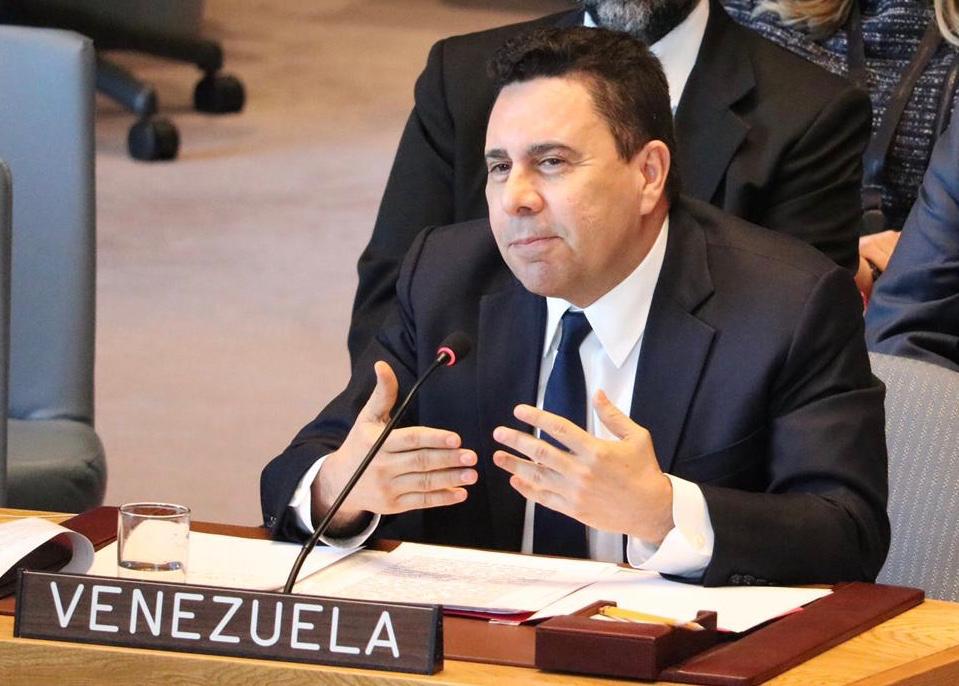 Pence is misleading the United Nations. Yesterday the Organization of American States (OAS) did not accept the designation of a new representative of the Bolivarian Republic of Venezuela. What happened yesterday was that they accepted the designation of a representative of the National Assembly, but it is not clear what that person can do, as the OAS is an Organization of States, represented by National Government, and not of National Assemblies. This legal absurdity took place as a result of the desires of Mr. Pence’s government to carry out a coup d’état in the OAS and another in Venezuela. As such, we suggested that all parties become well-informed over what was adopted yesterday in Washington. We warn that Mr. Pence’s government will try the same trick here, within the General Assembly, and we trust that it will fail.

The humanitarian situation in Venezuela needs to be resolved, but if we err in the diagnosis, we will also err in the treatment. The situation, as has been affirmed here, is the result of human actions. But what has not been said is that these actions are part of a plan for economic destruction designed by the government of the United States and its ally, the United Kingdom, with the goal of strangling the national economy, causing maximum social suffering, eroding the capabilities of our nation to sustain itself and, ultimately, to spark an implosion that will allow for a foreign military intervention based on the nefarious notion of the responsibility to protect, which has been used as an excuse for colonial invasions of countries that have oil.

This is a gigantic, inhumane experiment of unconventional warfare. A policy of calculated cruelty that violates human rights on a massive scale, reaching the point of committing crimes against humanity, all with the goal of justifying pillaging and looting, imposing a local, subordinate government and, in our case, using a racist ideology that arose over 200 years ago, when the United States was a slave-owning nation, which today they promote in violation of international law. We refer to the infamous Monroe Doctrine. Listen to their own words.

On January 9, 2018, spokespersons from the State Department declared “the pressure campaign is working… And what we are seeing … is a total economic collapse in Venezuela. So our policy is working, our strategy is working and we’re going to keep it.”

On October 12, 2018, Ambassador William Brownfield said: “We must treat this as an agony, a tragedy that will continue until it finally reaches an end (…) and if we can do it something to accelerate it, we must do it, but we must do it understanding that this is going to have an impact on millions of people who are already having difficulties in finding food and medicines (…) We cannot do this and pretend that it will not have an impact, we have that to make a hard decision, the desired end justifies this severe punishment.”

On March 7, 2019, Senator Marco Rubio stated that “Over the next few weeks, Venezuela is going to enter a period of suffering no nation in our hemisphere has confronted in modern history.”

On March 22, 2019, John Bolton noted “It’s sort of like in Star Wars when Darth Vader constricts somebody’s throat, that’s what we are doing to the regime economically.”

This is about deliberate economic destruction; it is the systematic application of aggression with the use of financial instrument, undue pressure, and the use of dominant market positions to influence the banking sector, private businesses and other nations that engage in legal trade with Venezuela, including even U.N. agencies. All with the goal of isolating the country from international trade and financing systems. If it were true that the Venezuelan government is killing its people, why would they need a massive wave of extortion to increase suffering? The interest in a social implosion is not ours; it is of those who wish to invade us.

It is a plan in which banks, insurance agencies and ships are used with a destructive power comparable to weapons of mass destruction, but without having those responsible face justice and without them suffering the moral sanctions they deserve. On January 30, 2019, John Bolton said “My advice to bankers, brokers, traders, facilitators, and other businesses: don’t deal in gold, oil, or other Venezuelan commodities,” while on March 29, 2019, Elliott Abrams said “We impose our sanctions. What does the regime do? The regime tries to figure out other ways to get around them. It tries to find new customers. It tries to find new sources of imports. So, what do we do? We watch carefully, and we can see ships moving and we can see new contracts with new companies, and when we do, we talk to shippers or we talk to refiners or we talk to governments and we say you should not be doing that. That’s what we’re doing.”

A repugnant aspect of this criminal policy of mass destruction is that it is accompanied by theft and pillaging that has cost our nation over $137 billion. While they deprive our people of essential goods, provoking maximum suffering, they rob the Venezuelan people of over one hundred billion dollars. The profits from our refineries are used to pay debts to oil companies friendly to the Trump administration. Its friends with Venezuelan sovereign debt bonds receive special licenses to collect their profits from money stolen from our people. They announced a plan to put the country into debt by $70 billion and to use that money to pay for non-certified debts in suspicious financial dealings. We cannot forget that the Bank of England, which stole $1.2 billion in old from our people using the excuses that they do not recognize President Nicolás Maduro and that they are complying with the Trump sanctions. The Bank of England is not an independent institution, as its government affirms; rather it acts as the enforcement arm of policies of conquest and pillage of the governments of Trump and Theresa May. It is the same colonial policy of the British Empire of over 200 years ago.

This is the true cause of the Venezuelan situation; there is no other. Certainly, our people our suffering and our government, as the Secretary General can certify, working intensely with the United Nations system to increase both the number of cooperation projects as well as the volume and capacities of those projects, particularly in the health, food, education, electricity and transportation sectors. The same is happening with regards to cooperation with the International Committee of the Red Cross, whose president met yesterday in Caracas with our Head of State to move forward in a direct mechanism that facilitates true neutral, impartial and independent aid. The same can be said of friendly countries who have provided assistance in peace and in respect for our sovereignty.

An element that can not be underestimated by those who wage war on Venezuela is the strength of our national spirit, which grows in the midst of these difficulties. The macabre experiment of destruction is aiming to prove that economic crime does work, that peoples can be broken and will surrender in the face of an oppressive foreign power. However, they got it wrong in Venezuela. The induced collective suffering is being resisted with the growing organization of our people. Our National Bolivarian Armed Force has not fractured and is more united than ever. Our workers are reacting to the attacks against our vital infrastructure with a discipline that the aggressors had never seen. Yes, there are trouble, but they are not leading to a civil war. Today, our people are setting an example for the world on how to fight for peace.

It would be logical to think that the efforts of our government to overcome the difficulties caused by aggression would be recognized and supported by the international community interested in alleviating suffering. However, what we are witnessing is a new wave of economic extortion that severs our country’s financial flows abroad and impedes action by the United Nation’s own agencies, which at this time have not found a way to receive our money and process the purchases required to meet the needs of our population. Do you know why? Because the Trump administration is waging a terror campaign against commercial and financial agents that touch Venezuelan money. What the United States has attempted to do so far is not humanitarian aid, but a covert operation without the consent of Venezuela, violating our territorial integrity, with a continuous threat of use of force, and openly inciting a military uprising and civil war. This is Mr. Abrams’ specialty.

This Security Council, according to the provisions of Articles 24, 34 and 39 of the Charter, has the responsibility to maintain international peace and security and to determine the existence of threats to peace or acts of aggression. As such, we request that it determine:

The legal basis on which the United States and United Kingdom apply a program of economic destruction on Venezuela, without the express authorization of this Council.

The legal authority to apply the so-called secondary sanctions on countries that legally trade with Venezuela.

The legal basis on which the United States threatens Venezuela with the use of force.

The legal authority on which the United States and United Kingdom can appropriate our riches, making profits through extortion with the mass violation of the human rights of our people.

The legal basis on which the United States can intervene in affairs that are essentially under the internal jurisdiction of Venezuela.

To conclude, the diagnosis for the current situation is the result of a campaign of aggression by the United States and United Kingdom. The treatment cannot be a new dose of aggressive interventionism with a humanitarian façade. The solution is not found in donations from those criminals who wish to portray themselves as saviors; it is not in channels of humanitarian aid designed to provoke armed conflicts; it is not in Donor Conferences that obscure the looting of our nation. The treatment is in returning the money stolen from Venezuela; in the end of the commercial and financial blockade of our people; in the end of the sabotage to our infrastructure through covert operations; in the end of threats of military intervention; and in the end of threats against Venezuelans who wish to engage in dialogue. We must stop Trump’s war. This Security Council must fulfill its mission, guaranteeing Venezuela its right to peace.

Even when they are surprisingly ignored by reports referred to here in this session, including those drafted by U.N. agencies, the criminal, unilateral sanctions have also resulted in an irrefutable increase in the migratory flow of Venezuelans, although we differ on the number mentioned here, considering that there has been a lack of due rigorousness in the methods to acquire such information, nor the timely and verifiable provision of migration data by receiving country.

We should note, fortunately, that Venezuela has not been a recent victim of either a natural catastrophe or an armed conflict. The migration that we see today in the region, which is encouraged by extremist statements and by a psychological war that instills terror regarding the certainty of the future in Venezuela with the goal of weakening the morale of our people, is of an economic kind and is the direct result of a plan for the programmatic destruction of our economy.

We cannot allow a human right like freedom of movement to be securitized or politicized. On the country, this very Security Council would be engaging in a double standard in not promptly convening a session on the humanitarian and security crisis on the border, as declared by Trump on March 15, 2019.