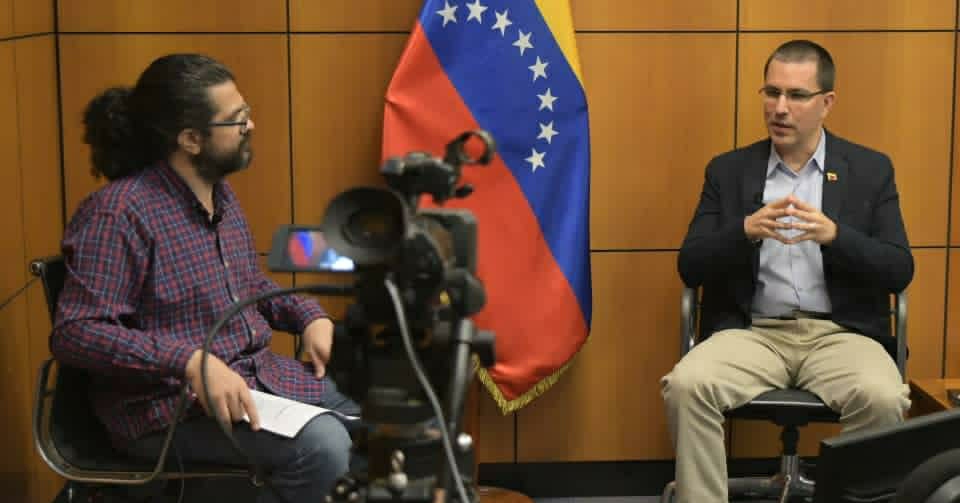 Foreign Minister Jorge Arreaza: ‘The peoples no longer give credit to media transnationals’

On Thursday, Minister of People’s Power for Foreign Affairs, Jorge Arreaza, granted an interview to journalists from domestic and international media in order to strengthen Venezuela’s Diplomacy of Peace in relation to domestic, regional and global media.

The joint interview was conducted by Pablo Kunich Cabrera, from Red Alba TV, and took place in the headquarters of Venezuela’s Foreign Ministry.

During the interview, they addressed issues such as regional integration, the return of democracy in the Plurinational State of Bolivia, the challenges and scenarios for the Bolivarian Republic of Venezuela in the face of the forthcoming parliamentary elections on December 6, and the role of alternative media in fighting smear campaigns against progressive governments.

“It is our duty to communicate with the people’s media to break the media blackout against Venezuela. Only the truth can make it possible,” stressed the Venezuelan minister.

When offering an overview of the region’s political situation and Venezuela’s international relations, Arreaza said that thanks to the Venezuelan people’s resilience, things are happening in Latin American and the Caribbean.

“We’ve got good news. The pots and pans are being bashed against neoliberalism. We can see people mobilizing to stop the corrupt oligarchies (…) The peoples of Bolivia, Ecuador, Chile and Argentina have undergone their processes and can no longer be deceived. They won’t give credit to mass media transnationals anymore. They have learnt how to discern information,” added Arreaza.

Likewise, the Venezuelan foreign minister said that the peoples that rose to power over a decade ago witnessed a new wave of integration that came to fruition with the establishment of mechanisms like ALBA-TCP, UNASUR and CELAC.

“Integration has always been a target of imperialism. The U.S. ruling elite harmed, undermined and sometimes recovered spaces; it tilted the pendulum towards the right, with a massive media operation, military and parliamentary coups. Now the pendulum is back to where it should be,” explained Arreaza.

Regarding Bolivia, he insisted that lessons and reflections must be drawn from the existing relation between the Bolivian State and the country’s military and police forces.

“That is how Bolivia can help us right now,” he said.

Regarding the December 6 parliamentary elections, the Venezuelan foreign minister explained it is of the utmost importance to renew the National Assembly, which, after the right-wing took it over in 2015, has only focused on attacking the Executive Branch, legislating against the Venezuelan people, and eliminating social policies by supporting the imposition of a fictitious government and U.S. unilateral sanctions, causing thousands of deaths.