The president of the Bank of Alba (Banalba) and Vice-minister for the Caribbean of the People’s Power for Foreign Relations, Raúl Li Causi, offering this Friday a balance of the annual management of the multilateral financial entity, affirmed that despite the difficult circumstances generated by the COVID-19 pandemic, Banalba “continues to generate profits that are reinvested in different socio-productive projects in the same region.”

This was expressed by the diplomat at the close of the 23rd Meeting of the Ministerial Council and 77th Meeting of the Executive Board of the Bank of the Bolivarian Alliance for the Peoples of Our America, which he led from Caracas together with the president of the Central Bank of Venezuela, Calixto Ortega.

In the telematic meeting of the highest governing body of the Bank, the Prime Minister of Dominica, Roosevelt Skerrit; the president of the Central Bank of Cuba, Martha Wilson, and the representatives of Bolivia, Nicaragua, Saint Vincent and the Grenadines, and Antigua and Barbuda were present.

Vice-minister Li Causi summarized that they reviewed the financial statements of the bank and the status of several projects financed with Banalba loans, the relaunch of the Antigua and Barbuda airline Liat and the purchase of equipment for the Venezuelan state airline being emblematic Conviasa.

Banalba this year recorded profits that were used to nurture the reserve fund that the Articles of Agreement mandate and cover the pending capitalization commitments of the member countries.

On November 5, 2008, the signing, approval and ratification of the Constitutive Agreement of Bank of Alba was adopted in Caracas by the ministerial representatives of the Bolivarian Republic of Venezuela, the Republic of Cuba, the Plurinational State of Bolivia and the Republic of Nicaragua, to which Saint Vincent and the Grenadines (2011), the Commonwealth of Dominica (2012) and Antigua and Barbuda (2019) joined. 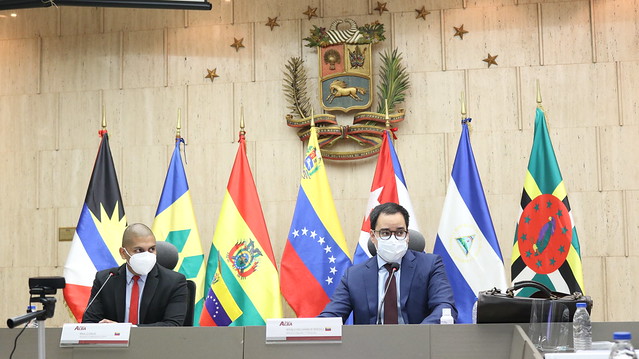