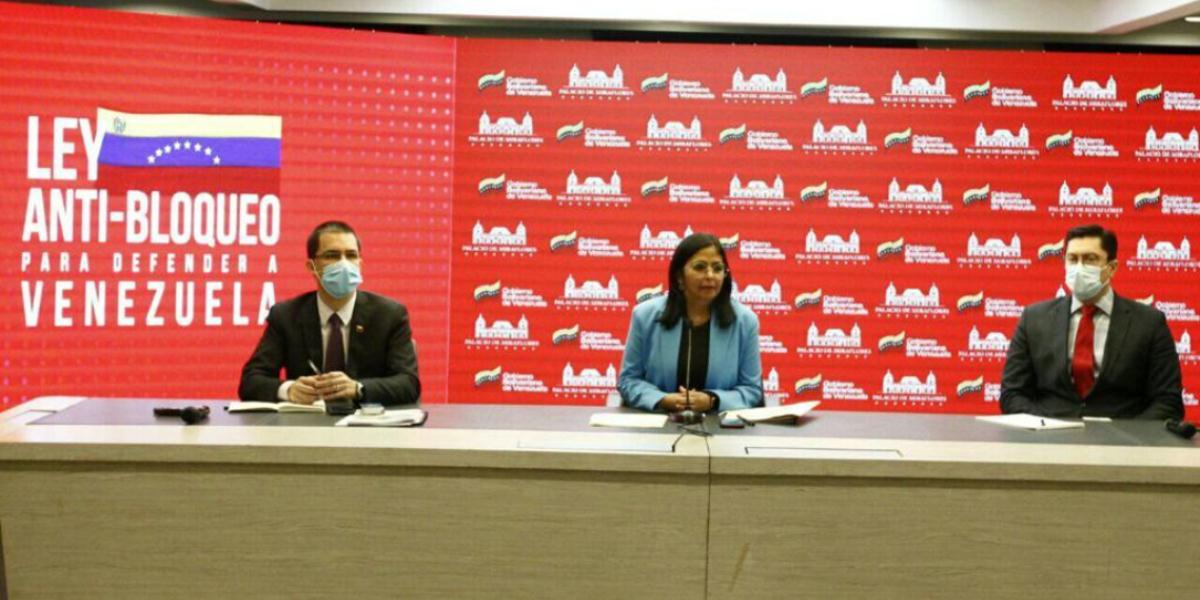 Executive Vice-president of the Bolivarian Republic of Venezuela, Delcy Rodríguez, and Minister of People’s Power for Foreign Affairs, Jorge Arreaza, presented on Tuesday the Anti-Blockade Law passed on October 8 by the Constituent National Assembly to the diplomatic corps to Venezuela and Venezuela’s ambassadors in the world.

In a video conference at the Simón Bolívar Hall of the Miraflores Presidential Palace, in Caracas, the Venezuela authorities informed the diplomatic delegations about this legal instrument promoted by President Nicolás Maduro to fight the aggressions of the U.S. Government against the people’s economic stability and Venezuela’s sovereignty.

In her statement, Vice-president Rodríguez said that the Anti-Blockade Law aims to protect the country’s investments, domestic and international assets, and guarantee the rights of the Venezuelan people, who, she stressed, are willing to defend their dignity and resources in face of imperial attacks, threats and persecution.

“We have provided enough evidence that Venezuela will not give up,” she highlighted.

The Venezuelan vice-president pointed out that when the Bolivarian Revolution came to power in 1998, Commander Chávez started a process of changes and devoted to build a socialist model to strengthen social protection, and he was widely recognized in all those years, standing in the way of the domination interests of the U.S. Government.

In this regard, Rodríguez recalled that between 2015 and 2019, the Venezuelan model was recognized for successfully fighting against hunger by the UN Food and Agriculture Organization (FAO), which turned Venezuela’s social policies in the food area into the Hugo Chávez Plan for the Eradication of Hunger, a model for other countries.

Rodríguez said that in 2018 the South American nation received the habitat award, recognizing the Gran Misión Vivienda Venezuela (GMVV), Venezuela’s housing program, a model built thanks to the country’s oil profits and hard currency incomes amounting to more than $800 billion that were invested in social development.

“The Venezuelan model is all about social inclusion, justice and equality; therefore, we have been widely and internationally recognized. The socialist model was also recognized by other international institutions and organizations. Now, the Monroe model was imposed in 2016 in the White House to counter the Bolivarian process,” she stressed.

The Venezuelan vice-president rejected the executive order signed by former U.S. President Barack Obama that declared Venezuela as an unusual and extraordinary threat to the national security of the United States.

“Since 2015, we have been facing sanctions and a subhuman blockade. The United States wants to asphyxiate Venezuela. In addition, we are facing the COVID-19 pandemic under these conditions against humanity,” added the Venezuelan vice-president.

Rodríguez assured that due to this terrible, criminal, economic, financial blockade, Venezuelan has lost 99% of its income in the last 6 years as a result from these unilateral coercive measures aiming to harm the country’s sovereignty, change the people’s opinion and take over the country’s huge wealth.

Vice-president Rodríguez announced the decision of President Nicolás Maduro to create an International Center of Investments with the Anti-Blockade Law to protect productive investment. This center will feature a basket of projects that will be unveiled for international investment, projects in oil, mining, gas, agriculture, tourism and other areas where Venezuela has a great potential to generate large-scale investment.

Rodríguez explained this Center will also have an observatory of unilateral coercive measures to inform the country about each illegal sanction issued by the U.S. Government with negative impacts on the people. In addition, it will have the Nation Branding Institute to defend and promote Venezuelan products and the Venezuelan people’s identity.

Arreaza stressed the importance of this instrument “to promote investment in Venezuela and guarantee legal and information security to investors.”

Finally, the Venezuelan foreign minister said “this law allows us to face the economic aggression against our country that has been displayed by the U.S. for a long time, especially in the last 5 years, making the performance and development of the Venezuelan economy and international trade difficult.”