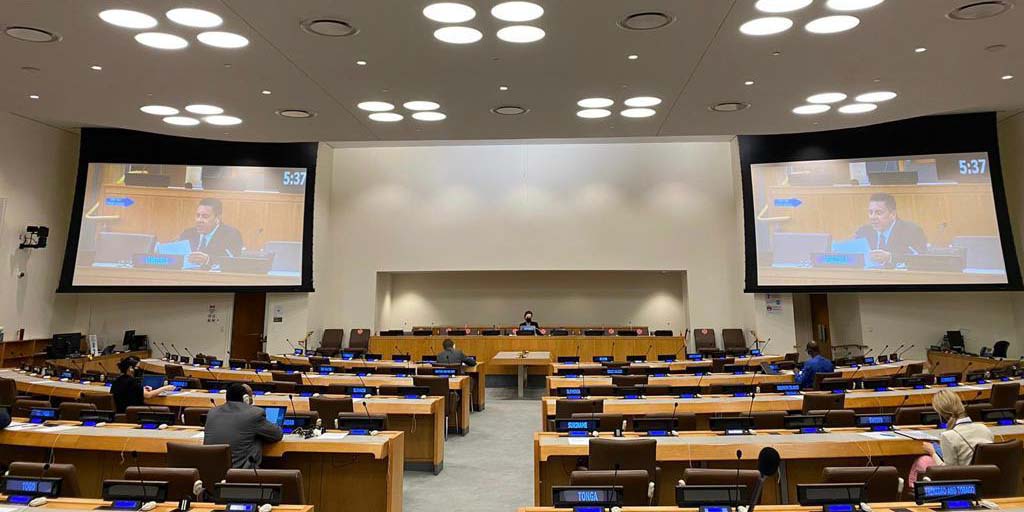 Permanent Representative of the Bolivarian Republic of Venezuela to the United Nations (UN), Samuel Moncada, participated on Thursday at the meeting of the Sixth Committee on the Agenda item 114, entitled “Measures to prevent international terrorism.”

In this context, the head of the Venezuelan delegation condemned the terrorist acts financed, planned and executed from U.S. and Colombian territories to disturb the peace and stability of the Venezuelan people.

“Today we condemn the main threat against the peace and security of our country: The Government of the United States of America. And, on the other hand, we condemn the country that has facilitated support and its territory in the last two years for the organization, training and protection of terrorists and mercenaries who have tried to cause chaos and violence in our country: The Government of Colombia,” said the Venezuelan diplomat.

Ambassador Moncada called on the UN member countries to effectively implement international norms to fight terrorism, especially Resolution 1373 (2001) of the Security Council, which demands States to prosecute or extradite those people involved in terrorist acts, to refrain from providing any form of support, to entities or persons involved in the commission of terrorist acts, and to deny safe haven to those who finance, plan, support, facilitate or commit terrorist acts.

“All terrorism is one and it must be prevented, fought and eliminated without doble standards. There are not good terrorists and bad terrorists. Terrorism does not admit justifications of any kind, much less due to the political motivations or ambitions of colonial domination from those governments that violate their international obligations. This common fight cannot be and should not be used for political purposes. Thus, the use of terrorism and violence to promote the overthrow of legitimate government is clearly untenable,” stressed Ambassador Moncada.

The Venezuelan representative recalled that, despite the efforts to silence the seriousness of the facts to disinform the international public opinion, Venezuela has been victim of international terrorism in recent years, and he highlighted the following facts:

At the meeting of the Sixth Committee of the General Assembly, Ambassador Samuel Moncada condemned terrorism in all its forms and expressions, and expressed Venezuela’s solidarity with all the victims of terrorism around the world.

In this regard, the Venezuelan diplomat pointed out that terrorist acts are criminal acts that contribute to cause terror, destabilize legitimate governments, break constitutional order and impacting on the economic, social development of the peoples through the deliberate destruction of infrastructures and institutions.

“From Venezuela, we highlight the need of relying on a resolute international cooperation among States in order to prevent, fight and eliminate terrorism in all its forms and expressions, and to succeed in our efforts against the financing of terrorism and those discourses and ideologies fueling terrorism, including hate speech, intolerance and the current growing violent extremism of supremacists ideologies that take advantage of the divisions and problems of each nation to encourage the commission of terrorist attacks,” concluded Moncada.