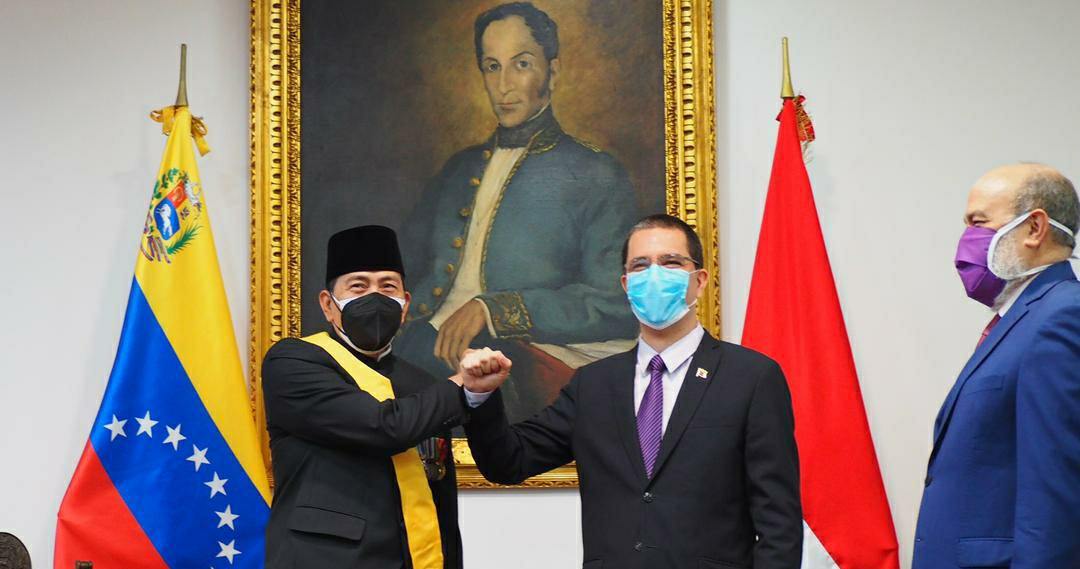 The Government of the Bolivarian Republic of Venezuela granted this Friday the Francisco de Miranda Order, in its First Class “Generalissimo”, to the Ambassador of the Republic of Indonesia, Mochammad Luthfie Witto’eng, who ended his duties in Caracas after four years and five months.

The People’s Power Minister for Foreign Relations, Jorge Arreaza, led the event and assured that the presence of the Indonesian diplomat since 2016 has marked steps of firm progress in the bilateral relationship.

“President Nicolás Maduro entrusted me to thank you for your work for our peoples. I am sure that we will see each other again because this will continue to be your other home, and in the future we will see our potentialities interacting to give concrete fruits and benefits to our countries Long live Indonesia and Venezuela!”, He expressed.

For his part, Ambassador Luthfie Witto’eng announced that bilateral cooperation between Indonesia and Venezuela could continue to flourish in the political, economic, commercial and tourist fields, not only for the benefit of the peoples but also as a contribution to the peace and stability of the Asian continent and Latin America.

“We have worked together with many institutions, activities have been carried out to encourage relations between the two countries in different sectors. I have not had any difficulties thanks to the support of the Government and people of Venezuela, especially the Ministry of Foreign Relations, which has always provided us their good cooperation”.

Finally, he took the opportunity to express his highest appreciation and good wishes for the Venezuelan Government.

“Our prayer is with Venezuela so it continues to achieve its well-being and prosperity under the government of President Nicolás Maduro. I say goodbye to a beautiful and majestic country, which has left us unforgettable memories.”