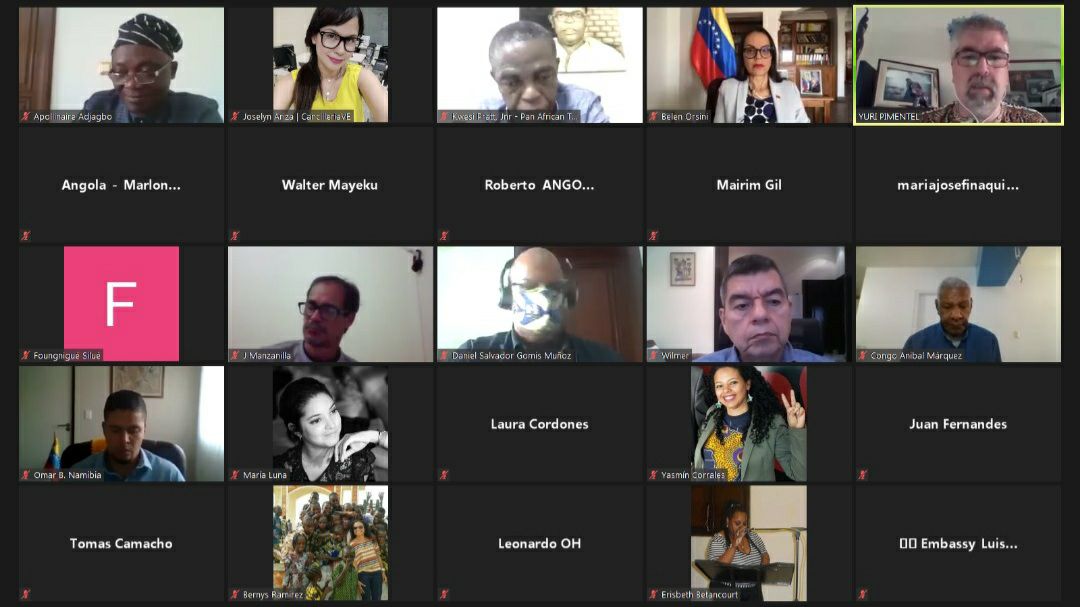 Opportunities for a new beginning in countries after the COVID-19 pandemic, the fall of capitalism, and the humanist, international vision shared by Africa and Venezuela were some of the issues discussed on Thursday at a virtual forum called ” Geopolitics of global economy: Opportunities for a new beginning in the countries of the global South after the COVID-19 pandemic”.

The event, convened on the occasion of the recent creation of the Simón Bolívar Institute for Peace and Solidarity among Peoples, was attended by Yuri Pimente, Kwesi Pratt and Appollinaire Adjagbo.

At the forum, Vice-minister for Africa of the Ministry of People’s Power for Foreign Affairs, Yuri Pimentel, discussed the general impact of the COVID-19 pandemic, especially on the economy, which has been hit by the worst recession since World War II.

Likewise, Pimentel offered an overview on the timely response to contain COVID-19 in countries such as Venezuela, Cuba and Russia. He also pointed out that the world sanitary crisis is not an isolated fact, but rather represents the failure of neoliberalism and the unsustainable nature of capitalism.

“Neoliberalism is facing a major crisis of ideas. Many of its weaknesses have been exposed, but it insists on recycling itself.”

Regarding the actions undertaken by the people of the south, Pimentel said they need to reject this model as it opposes life and humanity, and face selfishness with solidarity and the Bolivarian Project of a multicentric, multipolar world left by Commander Hugo Chávez as an alternative to the destructive, savage capitalist system.

“Faced with imperialism, we propose militant internationalism (…) We need to move forward towards the strengthening of the countries of the global south,” concluded Vice-minister Pimentel in his speech.

In that same vein, Ghanaian journalist, Editor-in-Chief of Insight, and Director of Panafrica TV, Kwesi Pratt, added that it is fundamental “to strengthen organizations such as the Bolivarian Alliance for the People of Our America- Peoples’ Trade Treaty (ALBA-TCP) and the Non-Aligned Movement (NAM) to face imperialism and even the very same African Union.”

Pratt also urged to express solidarity with Cuba, Venezuela and Iran, countries that have been systematically attacked by the United States, support the Sahrawi Arab Democratic Republic (SADR) and its inalienable right to self-determination, and denounce Israel’s ongoing illegal, expansionist activities in Palestinian territory in violation of international laws.

Likewise, he claimed the current model has shown its incompetence to preserve life and new generations.

“This system is not capable of creating a world where a child does not go to bed with an empty belly (…) The neoliberal system is falling apart in our faces,” he added.

During the video conference, University Professor Apollinaire Adjagbo started his speech by defining some basic concepts, including geopolitical economy, which he defined as “the space or weapon used by states and transnational companies to achieve economic dominance in global markets.”

Adjagbo spoke about the consequences of COVID-19 which, in his opinion, go beyond economic and ecological impacts.

Likewise, he said the problems to contain COVID-19 are mainly due to the difficulties faced by states to reach the most vulnerable communities, and the inaction of some governments and the international community to face armed conflicts and violence in some countries.

Professor Adjagbo moved on to discussed the perspectives on the world’s economic recovery, especially in the African continent, after the COVID-19 pandemic.

Noteworthily, in his opening remarks, Guillermo Barreto, representative of the Simón Bolívar Institute for Peace and Solidarity among Peoples, offered an overview of the havoc wrought by the pandemic, and shared some questions that have arisen during the pandemic.

“What kind of normality do we want to return to? Is this the end of capitalism? Capitalism has lost his hegemony, but is this the new normality? (…) I think this video conference must debate these questions to see the challenges posed by this new normality,” said Barreto, who added that this crisis does not only have to do with food security problems, but also with the U.S. imposition of unilateral coercive measures and even climate change.

Likewise, Barreto discussed the political and economic changes brought about by Russia and China, the latter with the Belt and Road Initiative, to counter the capitalist model of “civilization.”