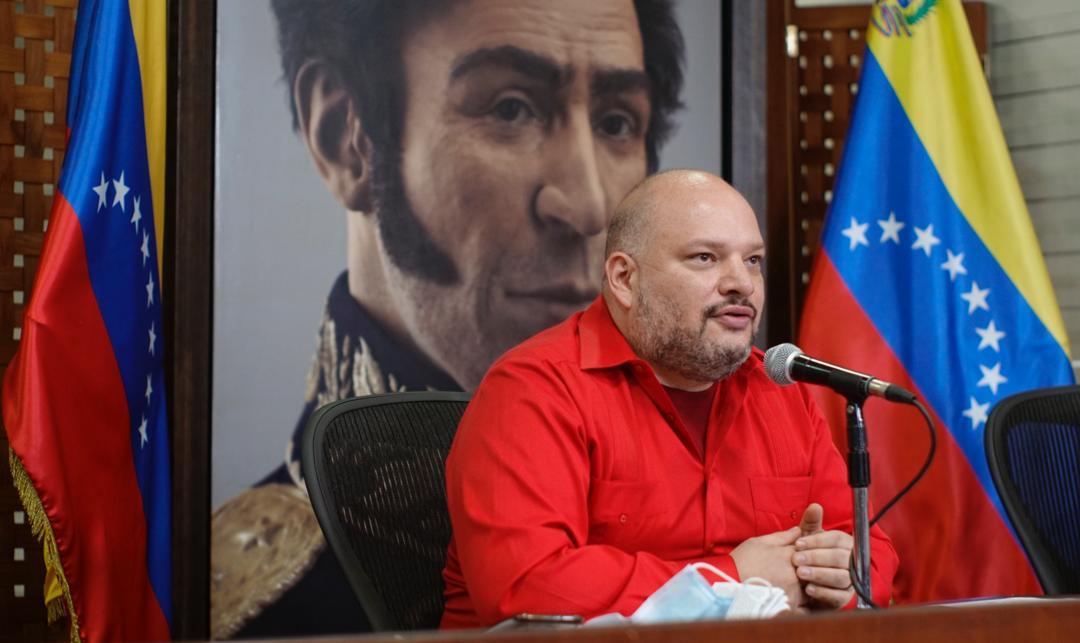 Carlos Ron: ‘The Simón Bolívar Institute is a meeting space for the articulation of peace’

On September 6, President of the Bolivarian Republic of Venezuela, Nicolás Maduro, announced the creation of the Simón Bolívar Institute for Peace and Solidarity among People.

The Institute is based in the headquarters of the Venezuelan Foreign Ministry and aims to organize solidarity with social struggles.

Alba TV talked with Carlos Ron, president of the Institute and vice-minister for North America, in an interview held at its inauguration.

What is the main goal and why is it urgent to create the Simón Bolívar Institute for Peace and Solidarity amid this pandemic and this major siege?

The capitalist model of production is going through a deep crisis that has a huge impact on the economic, social, environmental, and political fields. The COVID-19 pandemic showed this model reached its limits and is unable to guarantee the lives of peoples and the planet. We need a new paradigm, one which does not jeopardize human life and the life of the planet. We need a paradigm built on solidarity as a value and as the foundation of the peoples’ organization to create new model of society.

We believe this is possible by raising the flags of thoughts and action of Simón Bolívar, who is the historical reference of Our America to fight for emancipation, unity and the people’s democracy. The model is aware it is in crisis and it is doomed, but it tries to maintain its hegemony, and therefore, it becomes more violent against any other alternative that may arise. It becomes more violent by trying to secure all the economic resources. That’s why it is merciless with Venezuela, and that’s why it has undertaken a “maximum pressure” campaign to impose, as they have said, a 2.0 Monroe Doctrine.

We have our liberating doctrine, the thought of Simón Bolívar for the 21st century, which is the fight against imperialism and colonialism exacerbated by this crisis. It is an emancipating fight put up by the peoples, a fight that stems from solidarity to build peace and the balance of the universe.

What causes will the Institute take up?

The Institute’s goal is to articulate solidarity with Venezuela in the world. Venezuela has a lot of friends who support its struggle, its right to self-determination, who reject aggressions against our country, and we will be there as a permanent communication vehicle, improving communication among them and among the popular forces of Venezuela that also support the great causes of humanity.

Solidarity is reciprocal.  Sometimes we only hear about the world’s solidarity with Venezuela, but Venezuela also shows its solidarity with other peoples in their struggles, with the Palestinian people, whose existence is threatened every day; with the peoples that have been illegally blocked by the United States, like Cuba or Iran; with the U.S. people who are suffering in the face of institutional racism, with the Puerto Rican people who are in a permanent crisis as a result of an anachronic colonization, with the Chinese people, against whom the United States is trying to create a new Cold War; with the struggle of women for putting an end to the patriarchy’s structures around the world, with the fight for food sovereignty and the defense of the planet; anyway, the solidarity of Bolívar’s people is with all the popular causes and against injustices.

As an institute created by the State, how does it articulate with Latin American and Venezuelan social movements?

When you talk about internationalist solidarity, what message are you conveying and who are you summoning?

Internationalism is part of the vision on international relations enshrined in Article 152 of our Constitution, which mentions solidarity among the peoples. In this regard, the message we wish to convey is that solidarity among people is alive in Venezuela, and that everybody’s emancipating struggles are also ours.

We are inviting peoples that have defended Venezuela for years and believe in our anti-imperialist struggle. We have personalities, academicians, intellectuals, institutes such as the Tricontinental Institute for Social Research, or knowledge-based spaces such as the Global University for Sustainability. We have organizations such as the World Peace Council that fight for peace and expressed their voices at multilateral forums like the United Nations. We have political parties such as the Party of the European Left or the Party for Socialism and Liberation in the United States. We have social movements of our region and the world that have united for different causes such as the World March of Women, the Via Campesina, ALBA Movements, the International People’s Assembly. The invitation is wide open because there are a lot of causes and a lot of solidarity.

Where do the women’s struggles against violence and patriarchy fit in the causes championed by the Institute? Taking into account the increase in violence and femicides in the region. They have been called “the other pandemic.”

It is an issue we intend to tackle from our spaces. Venezuelan women are one of the main victims of the U.S. blockade. We are well aware of the importance and need of fighting against patriarchy and violence, especially amid a pandemic where women have become its main victims, given the inability of the dominant model to guarantee their rights. A call for action is necessary to acknowledge this reality and face it. We will accompany the World March of Women in October this year in their 24 hours of feminist solidarity.

What kind of peace does the Institute want to promote? What’s its perspective? Taking into account that strong, organized and articulated actions can bear better fruits.

That great Bolivarian figure, Commander Hugo Chávez, put it clearly: “The future of the multipolar world lies within us, in the articulation of the majority peoples on the planet to defend ourselves from new colonialism and to attain balance in the universe that neutralizes imperialism and arrogance.”

That’s the kind of peace the Institute promotes, a peace built on the solidarity among peoples. A peace that respects international laws, the fundamental rights and life can’t be invoked by a single people, by a single organization, by a single voice. Its strength lies in peace as a common patrimony. We should undertake actions to jointly promote and defend it. Latin America and the Caribbean is a Zone of Peace as decreed by the CELAC. This was achieved by joining the will of all nations.  Now, it is up to the peoples to defend peace.

Venezuela is a country under siege. What do you think is our vision of peace and solidarity?

The blockade and siege against Venezuela are unilateral and illegal. Faced with arbitrariness and violence, we fight back with internationalism and solidarity. Amid this pandemic, the U.S. criminal government blocks our access to goods and services to fight it, but the solidarity of other countries like Cuba, which has been here with its doctors, like China, which has sent its experts, like Russia, Iran, Turkey and the World Health Organization, among others, opened up the possibility to bring what we need. Solidarity with Venezuela is fundamental in this moment, especially to preserve peace in the face of the violence of a model in crisis.

How do we really fight domination and discrimination? How can we continue getting rid of colonialism?

It is a constant work that starts with training, knowledge, and understanding our reality and where domination and discrimination originate. In Venezuela, we get rid of colonialism by cutting through the bonds of dependency and building a communal model.

Can there be peace while there is colonialism, violence, domination, exploitation, racism, male chauvinism, xenophobia, inequality and looting in our region and Venezuela?

Peace is under the constant threat of all those aggressions you mention. Our challenge is to work on its construction and defense. There is no rest in this task, and we have to be very creative to succeed.