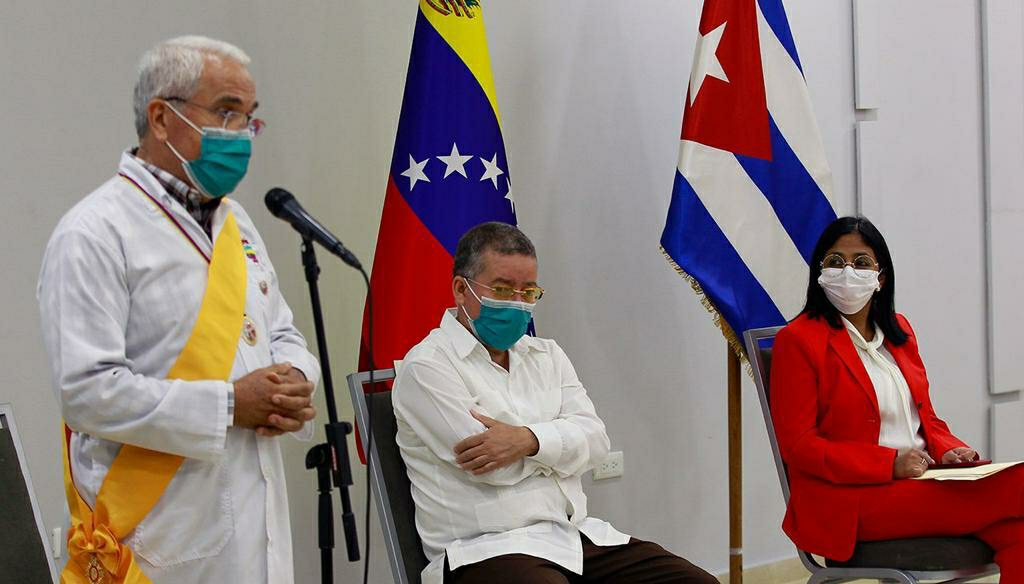 The Bolivarian Government on Tuesday decorated the delegation of doctors from the Republic of Cuba, present in the country, for the valuable support they have given the Venezuelan people in the fight against the coronavirus pandemic, COVID-19, which has affected all the national territory.

With the Francisco de Miranda Order in its first class (Generalissimo) and in its third class (Official), Venezuela recognizes the work of health professionals, who have saved thousands of lives in the country through the Barrio Adentro Mission, very especially in times of pandemic.

The meeting was led by the Executive Vice-president of the Republic Delcy Rodríguez, who was accompanied by the Foreign Minister, Jorge Arreaza and members of the Presidential Commission for the Control and Prevention of COVID-19, the People’s Power Minister for Health, Carlos Alvarado and the Strategic Operational Commander of the Bolivarian National Armed Forces, Remigio Ceballos Ichaso.

In addition, the activity was attended by the director of the Cuban Ministry of Public Health, José Ernesto Betancourt, and the Head of the Cuban Missions in Venezuela, Julio García.

It is important to highlight the relationship of brotherhood and solidarity that both peoples maintain, especially in the midst of the current health situation that the world is going through due to the situation produced by the deadly virus.

This pandemic is an opportunity to strengthen the feeling of solidarity and mutual cooperation, in the face of the persistent attacks that both nations suffer from the Government of the United States and its allies, showing respect for the self-determination of the people and non-interference in the internal affairs of free and sovereign nations.

Cuban doctors have been deployed in various countries to reinforce public attention against COVID-19, demonstrating their humanistic character.