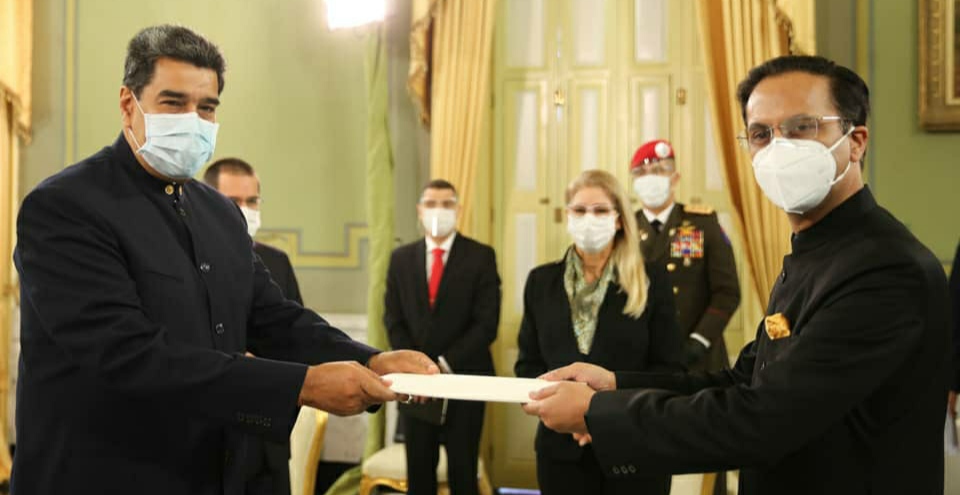 In a ceremony that took place in the Miraflores Palace, this Tuesday, the president of the Bolivarian Republic of Venezuela, Nicolás Maduro, received the credentials of the new ambassador of the Republic of India, Abhishek Singh.

Ambassador Abhishek Singh began his career in the Indian foreign service in 2003. In 2016, he served as first secretary in the Permanent Mission of India to the UN, that same year he was appointed deputy head of the diplomatic mission to the Federal Republic of Germany.

He also served as Director for Eastern and Southern Africa in the Ministry of Foreign Affairs of the Government of India.

Venezuela and India forged ties of friendship and commercial cooperation on October 1, 1959; since then, their diplomatic relations have been characterized by cordiality, complementarity and respect for the self-determination of the peoples, a fact that has been reinforced since the arrival of the Bolivarian Revolution.

Both countries share spaces for international political cooperation in the UN; and the development of important projects in the areas of energy, oil, education, culture, technology, commerce and health.

Prior to this meeting, in the afternoon, Ambassador Abhishek Singh handed over the copies of credentials to Foreign Minister Jorge Arreaza, in a ceremony that took place at the People’s Power Ministry for Foreign Relations.