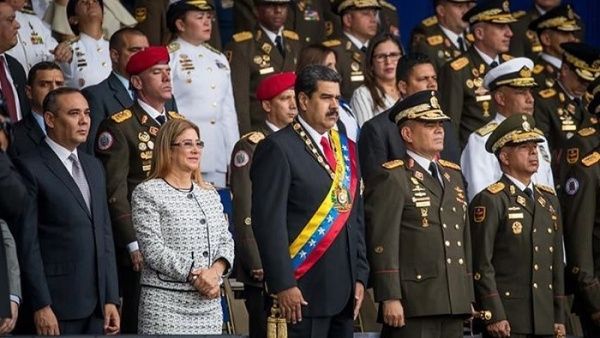 Today is August 4, two years of the attempted assassination against the constitutional president of the Bolivarian Republic of Venezuela, Nicolás Maduro Moros.

That Saturday, during an act to commemorate the 81st anniversary of the creation of the Bolivarian National Guard (GNB), two explosions occurred while the Venezuelan Head of State gave a speech on the Bolívar Avenue in Caracas, he spoke promptly about the issue of the country’s economic recovery and the efforts of its management in this regard.

After a few minutes, it began to drizzle, which caused some of the people who occupied the press platform to choose to go down from it and relocate themselves on the right side of the avenue. That, later, allowed to have a visual of what happened from another point.

Meanwhile, President Maduro continued there in front of a military parade made up of GNB troops and accompanied by authorities such as the first combatant, Cilia Flores; the People’s Power Minister for Defense Vladimir Padrino López, as well as the highest authorities of the Public Powers of the country, when the speech was suddenly interrupted by the explosion of a drone that was flying over the distance from the presidential platform, a second explosion (from another drone) was registered, a few seconds later, over a building located 500 meters from the place, from where the Head of State spoke.

The President was evacuated from the event, the security forces handle the situation as an attack against the President.

At least seven GNB cadets were wounded, while the President, like his cabinet, were uninjured.

That same day, after 8:30 at night, from the Miraflores Palace, President Maduro addressed the Nation, there he stated:

“They have tried to assassinate me today (…) I have to report that part of the material perpetrators of the attempt on my life today have been captured and are already being prosecuted (…) and the first investigations indicate that several of the Intellectual responsible for financing this attempt on my life live in the United States of America, in the state of Florida, and I have no doubt that everything points to the Venezuelan extreme right in alliance with the Colombian extreme right and that the name of Juan Manuel Santos is behind this attack.”

After this attack, from the communicational point of view, some communication corporations tried and continue trying to make the fact invisible, even the international media on August 4, 2018, minimized what happened, calling it “supposed attempted assassination”, thus ignoring the danger that this event represented.

Studied in depth by intelligence teams in Venezuela and around the world, the attack on August 4 sets a precedent as it became the first attempted assassination drone on the planet.

It was an attack that in light of the statements obtained was planned from abroad to completely decapitate the government. An attack that would be seen live and direct by millions of people.

A student at the Venezuelan military academy said: “With this explosion they could have killed many officials, who apart from being officials we are people, we have wives, children, parents, brothers.”

The testimonies said that that August 4 will be remembered as a day of resurrection because that day they were born again.