On behalf of the Bolivarian Republic of Venezuela, the Vice-minister for Multilateral Issues of the Venezuelan Foreign Ministry, Alexander Yánez, proposed including a statement against unilateral coercive measures in the Final Declaration of the XXVII Ibero-American Summit, “due to its illegality and its effect on the society, economy and human rights” of the peoples who are victims of this imperial and genocidal policy.

At the conclusion of the III Meeting of National Coordinators and Cooperation Officers of the Ibero-American Conference, which prepares the summit of the integration mechanism, the Venezuelan diplomat noted that they discussed the content of the Final Declaration of the same, which will deal with innovation for development in the context of the COVID-19 pandemic.

He noted that it was also considered to design a roadmap to reorganize the schedule of the Ibero-American Conference based on the impact of COVID-19, as it could not be held in person.

Likewise, Andorra presented a report on its management during this year of work at the head of the pro-tempore presidency of the Ibero-American Conference and the proposal to create a working group on the economic issue was debated, said the Vice-minister for Multilateral Issues.

This Monday, during the first day of the virtual meeting, the Venezuelan representative stressed that unilateral coercive measures “are a malignant virus that must be eradicated”, after comparing that, like COVID-19, this policy of the Government of The United States kills people, destroys the economy, and damages the health systems of the nations subject to it.

Venezuela also called for work on the configuration of a new post-COVID-19 geopolitics, focused on strengthening multilateralism and creating a new social pact based on human beings and not on the economy. 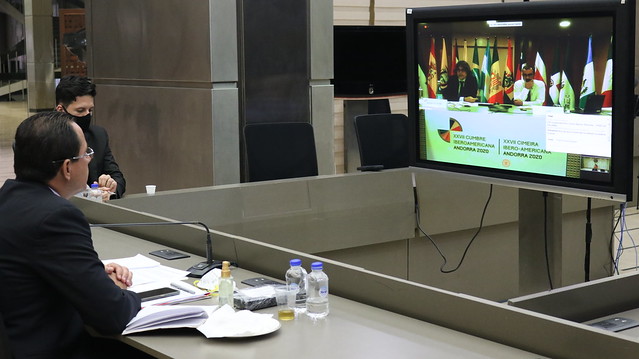